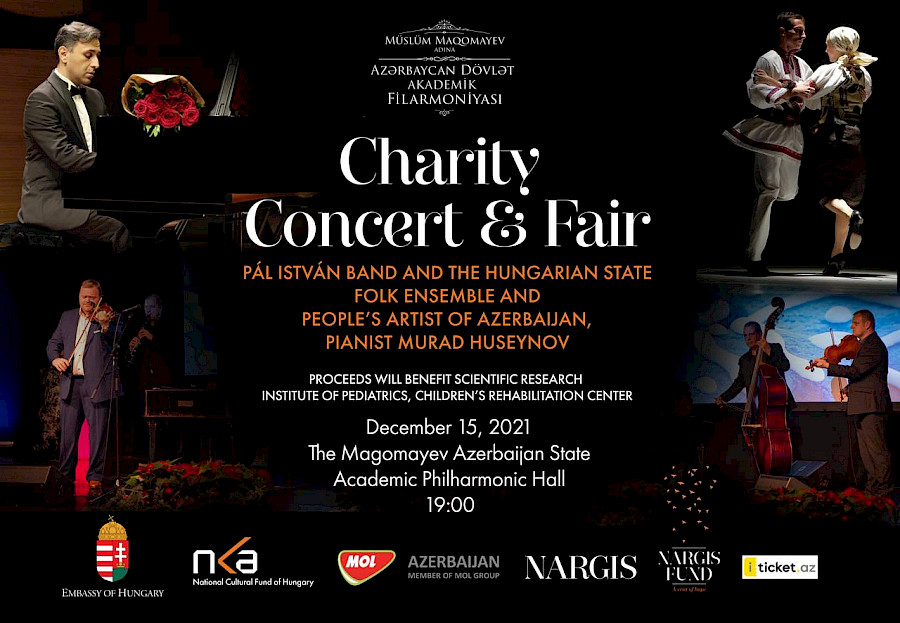 The magical charity event consisting of two parts, a concert and fair, is annually jointly organized by the Embassy of Hungary in Azerbaijan and the “Nargis” Fund and Magazine on New Year’s Eve. Following the pandemic, the next charity concert and will be held on December 15, 2021 at the The Muslim Magomayev Azerbaijan State Academic Philharmonic Hall.

The traditional charity project unites the rich cultures of the two friendly countries on the same stage. During the event the Hungarian State Folk Ensemble and Pál István Band will share the stage with People's Artist of the Republic of Azerbaijan, director of the International Mugham Center, pianist Murad Huseynov.

Laureate of various international and local awards, István Pál is the art director of the Hungarian State Folk Ensemble. The world-famous István Pál Band are famous for their unique folklore repertoire and for bringing to life the centuries-old culture and traditions of the Carpathian region. The Hungarian State Folk Ensemble and the Pál István Band take special place at all the large-scale European festivals, as well as perform concerts in all the corners of the globe.

All the proceeds from ticket sales, as well as the charity fair to be held in the lobby of the State Academic Philharmonic Hall, will be donated to the Scientific Research Institute of Pediatrics, Children’s Rehabilitation Center.
Classical and folk music, dances and a lot of fun are waiting for you over the course of the event, and most importantly, by joining the event, you contribute to the common good cause!

It is noted that the charity concert and fair are held with the support of MOL Group. MOL Group is a leading integrated Central Eastern European oil and gas corporation headquartered in Budapest, Hungary. It has operations in over 30 countries and employs 25,000 people worldwide.
MOL Group entered Azerbaijan in 2019 by acquiring a 9.57% stake in the Azeri-Chirag-Gunashli oil field, and an effective 8.9% stake in the Baku-Tbilisi-Ceyhan (“BTC”) pipeline that transports the crude to the Mediterranean port of Ceyhan.
MOL is the third largest field partner in ACG, a supergiant oil field, located in the Caspian Sea, which is operated by BP and started production in 1997.

Tickets can be purchased at all the ticket offices, as well as on the iTicket.az website.

For further information, please, contact the Embassy of Hungary in Baku or “Nargis” Magazine and Fund.