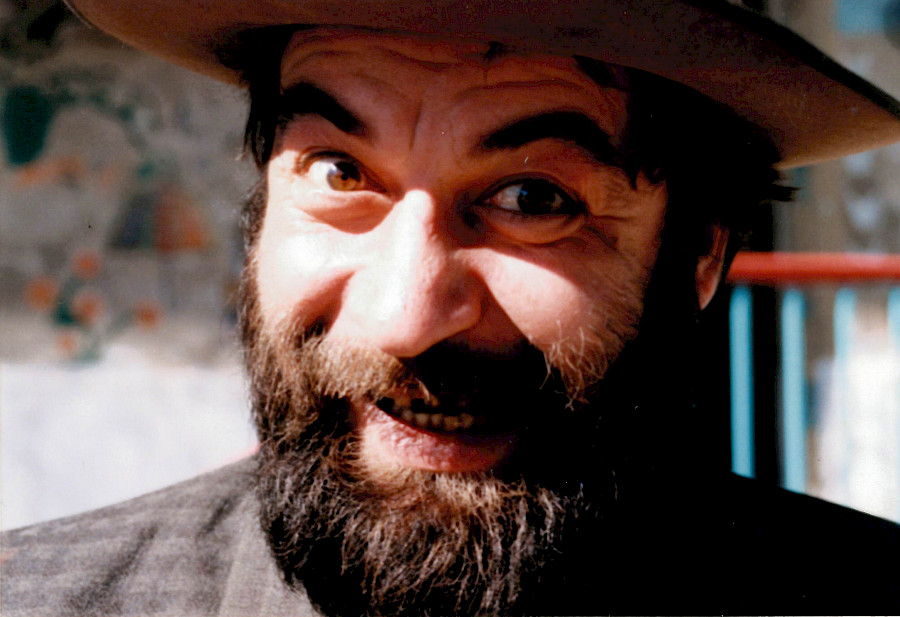 He didn’t like twilight. Something was happening to him at the moment when the light went out as if an alarm had been triggered. And in the night, peace and joy came from the coming dawn. He loved the night and was awake in anticipation of the new morning.

Time is my morning tale

Terrible and kind, but too

Expensive for the invented ink

They say he did not live, but burned. Lighting all around, burning himself. Ujal lived only 44 years. It was as if he was in a hurry to create the most important thing to which he walked, learning in art life, but in life – art. And he lived every day like a painting, starting it from a blank canvas. Moving forward in each new picture. intuitively, by touch, he never planned anything, taking any upcoming moment, meeting or parting as a gift from above.

From something in the air

From the desire of the innocent,

From the dream of one rainbow

I build myself tomorrow.

But what was behind the endless improvisation and erratic lifestyle?

“A verified, well-thought-out concept in every work,” recalls the director, artist Tarlan Gorchu. – At the beginning of the 90s, the Children's Fund, which I then headed, made the first six books from the series “ Tales of the peoples of the world”. After that, we constantly collaborated with Ujal. What he did is not just an image at all: here is culture — knowledge of world literature, costumes, the history of fine art... It seems to me that it was in the art of illustration that his mighty intellect became especially prominent. It is very difficult to create a whole performance on a single graphics sheet, and the series gave such an opportunity. Even from the smallest illustration to a fairy tale he did a mini-performance. – with the introduction, the development of the action, the climax and the ending, – in which, as in a hologram, the whole fairy tale was highlighted.

Draw me on a sheet

Its solitude is white.

Draw me on the water

My reflection is white.

It is curious that the fairytale in which Ujal was born remained for a long time without a name. The first two months he grew up without a name: his parents could not stop at any of options. Even the name Nikita was considered – the times were Khrushchev's... But then the day came when the father of the family, the artist Hasan HHakverdiyev, called his friends, the artist Sattar Bahlulzade and the writer Mikayil Rzaguluzadeh, to finally solve this issue. The family story says that at some point in the dispute, Sattar suddenly struck, he even jumped on the chair and exclaimed: Eureka! We will give him the name Ujal!.. Father liked it immediately. So this name first appeared in Azerbaijan. Ujal's mom, paediatrician Vera Ivanovna, was from Russia, it was an unusual name for her, it was difficult to pronounce, so at first, she called him just my boy or my companion... Ujal was 22 years old when there were no parents, but a memory, he often resurrected his mother as his companion and, prompted by this word, ideas about something glowing, flying high above...

And I will write to you the sky

And a ball of flowers and leaves,

And the candles of the stars do not repay –

After all, in the fairy tale, you need the light of their truths... 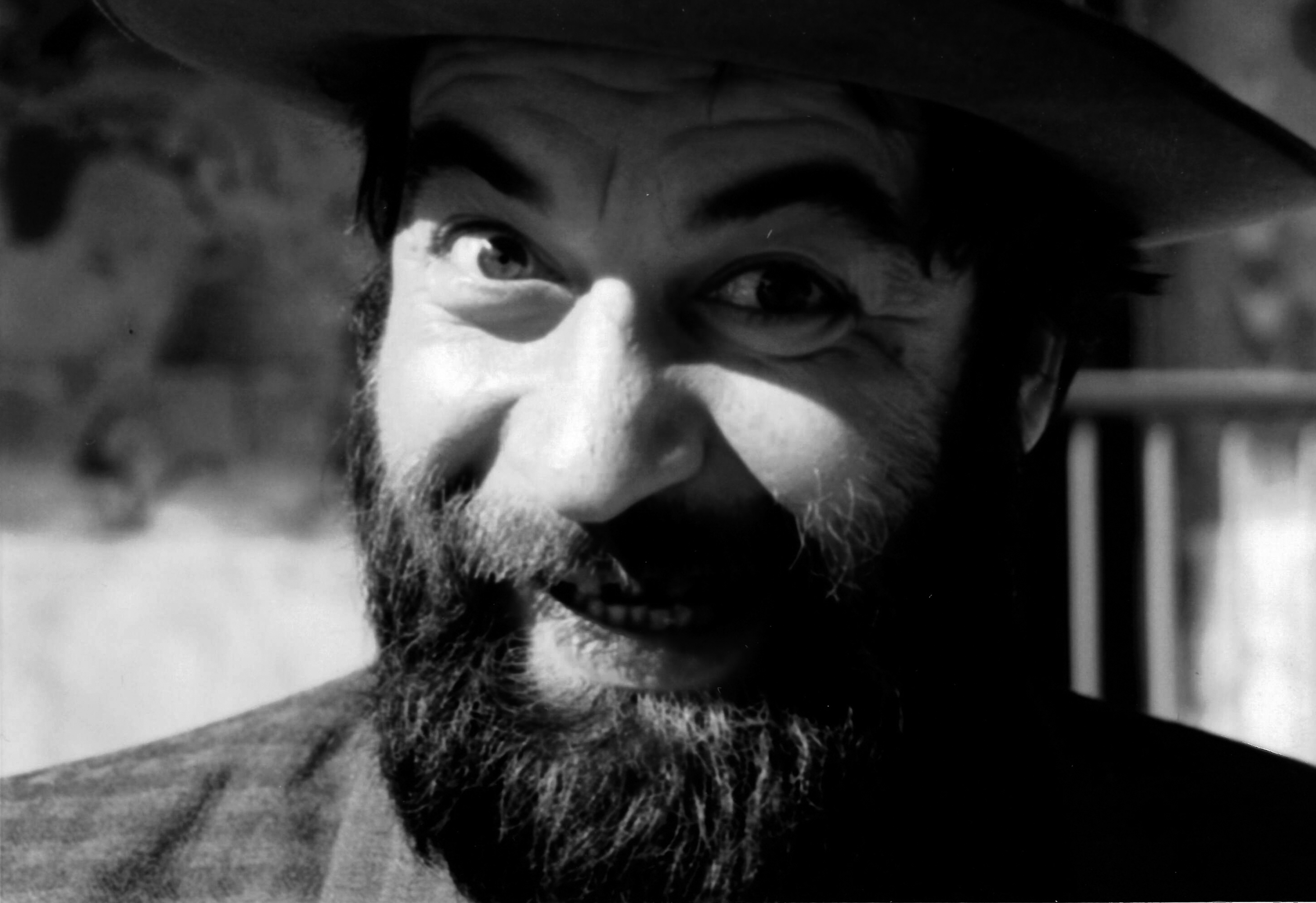 The visual arts came into the life of Ujal from the very beginning of his birth – in the large family of the Hakverdiyevs, all his older brothers and sisters painted. But the younger one also showed poetic talent. At the age of four, he read, wrote and recited poems, and later, in his youth, he began to write them himself. From that moment on, poetry will always accompany his journey in search of himself. Today, reading the verses of Ujal, it is difficult to imagine what a severe school of life he had to go through. In his poems, Ujal always rose above the ordinary, above the earth. 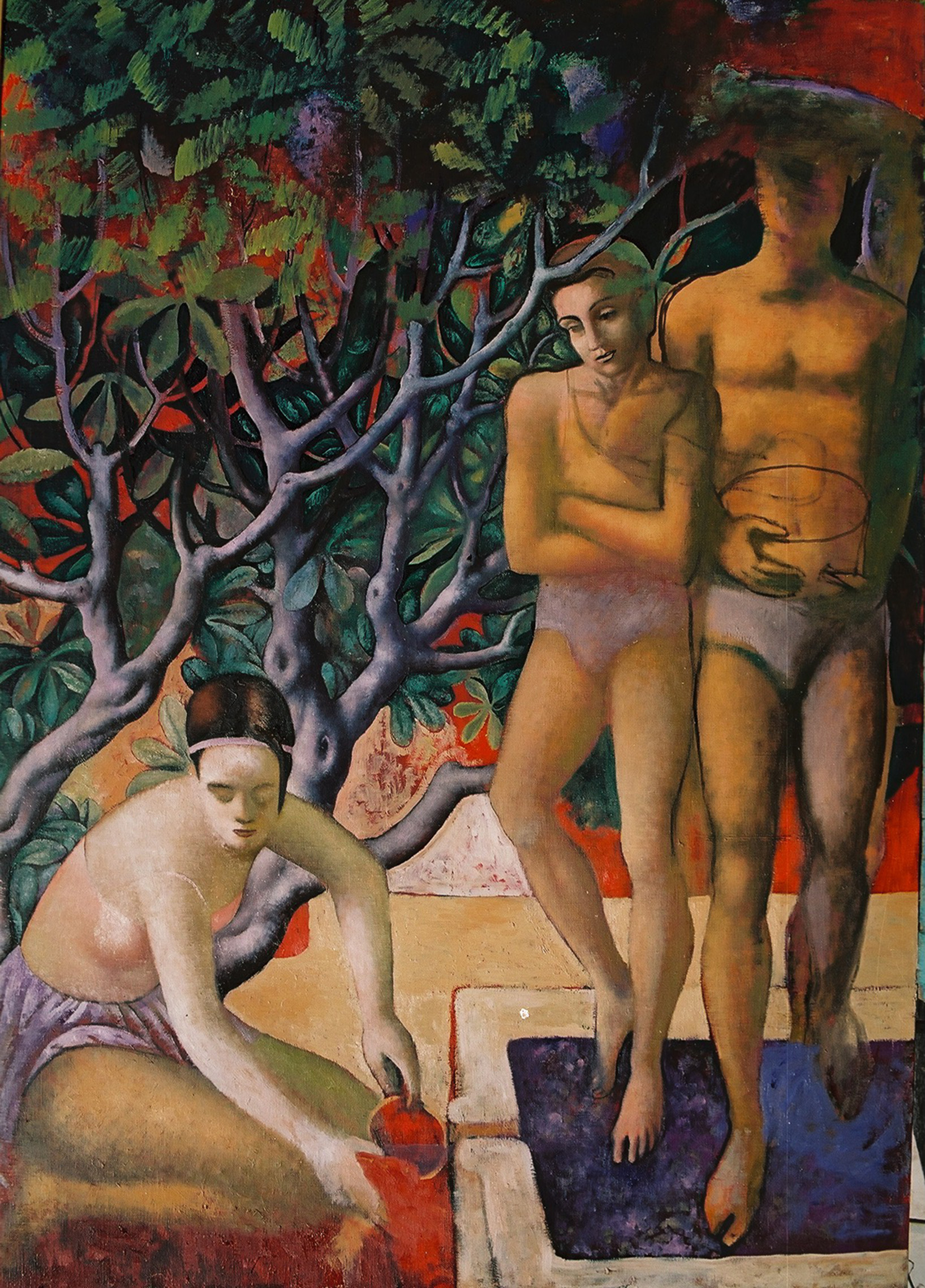 – After the eighth grade, we all enrolled in an art school. It was a tradition in our family... Ujal studied at a school! – The elder brother, the sculptor Huseyn Hagverdi does not hide a smile. “Behind the courtyard of our House of Artists, where everyone could spend hours watching how Kamal Ahmed, Rasim Babayev, Murad Ashraf, Sanan Kurbanov work, talk and consult with them, thus receiving an academic education from the classics of an art school, the school seemed just a kindergarten.

Teaching him at a pedagogical institute looked just as senseless: he received his own Ujal university by reading books, listening to music, communicating with mentors. After the death of his father, Kamal Ahmed became one of them, today a classic of Azerbaijani art, and in the distant 70s – a dissident from painting, an underground artist. It was there, in the basement workshops in the neighbourhood where they worked, that the sacrament of Comprehension was accomplished.

– He asked him the direction, created the rod, its design. Maybe then the personality of Ujal – strong, able to resist – took place, says the spouse, artist Elena Alekh Hakverdiyeva. – Many did not understand and did not accept Kamala – he was too strict and stern. I remember his words: If you will not shine, if I will not shine, if we will not shine, who then will disperse the gloom?.

This was his motto, and he inspired these rules to those who were there... Would not say anything on purpose, not teach, but just, for example, stop by and start reading Yesenin... Kamal influenced a whole galaxy of artists. All then studied books, went with volumes of poems, and Ujal including. He was forced to live in the resistance, with the application of force to being …

Already the anchor hit the bottom of the backwater.

Lower the boat with a strip of red.

Nobody alone knew ahead of time:

How dangerous is travel?

And it turned out to be extra urgent

Ship riot and everything else,

And, of course, stupid love...

Since the late 70s, Ujal Hakverdiyev has taken the path of a professional artist. The hard way, often accompanied by hungry downtime. However, for that period it was in the order of things – so most artists lived, somehow interrupting between government orders for a picture or illustration.

–“The first serious purchase of the Ujal painting happened in the years of perestroika,” Elena recalls. – It was a beautiful canvas, just a masterpiece. A Frenchman came into the workshop and immediately gave $ 500 for this work, at that time crazy money!.. Ujal stunned came home and gave them to me with the words: Lena, I did not spend anything, I just bought some beer. Hide and do not spend, then he would come back for them!.. He did not immediately believe what is really possible.

Meanwhile, paintings sold out, went to exhibitions abroad, where most remained. During his lifetime, Ujal did not make a single personal exhibition. He didn’t need this – he just gave himself completely to his work, without making any effort to become famous... The name of Ujal during his lifetime became a nominal, synonymous concept. A great Artist...

It is difficult to say what more contributed to such popularity – his professionalism or absolute openness for everyone entering his life. The Ujal workshop rarely closed, and people were constantly crowding around it. Plant, the soul of all companies, he loved to surround himself. sometimes it was necessary to force him out of the state into which he grew roots. Sometimes they did not succeed... 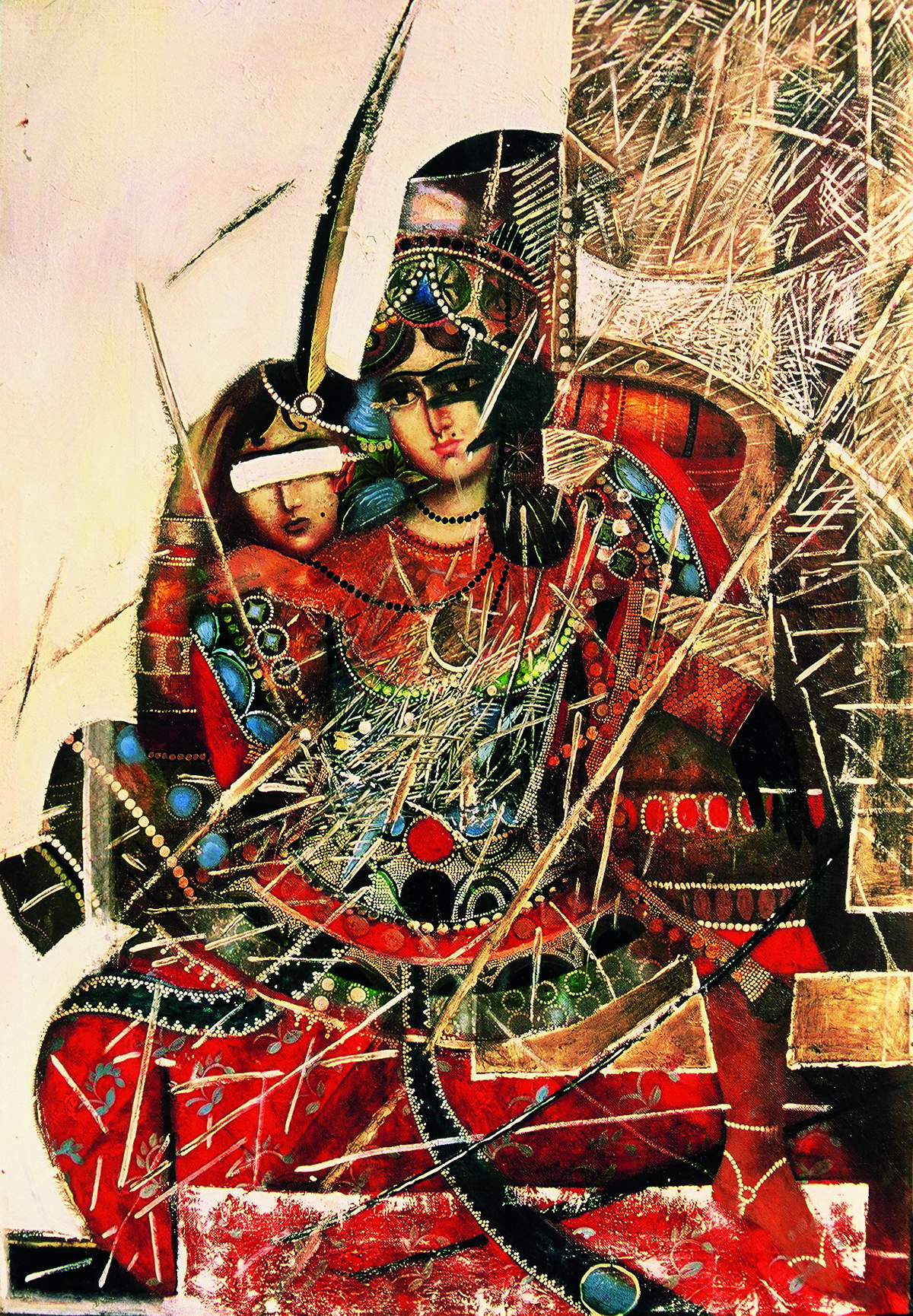 Ujal moved through life hurricane, squall, which was unstoppable. Neither fame nor money was needed for him: he could have just spent the fee that he had just received or given to the first person in need. He walked the path of incessant search. In addition to its main direction – painting and graphics, he turned to a variety of materials: he worked now with ceramics, now with wood. There was even a period when he began... to embroider portraits. He collected floss threads from everywhere, friends brought him boxes full of boxes, still from his grandmothers, the coils with which he was lined. And the era of new passion began, spilling a whole series of portraits embroidered on the fabric.

I sit quietly near the wash,

I dip a brush in the blue sea.

I draw the sea – blue distance.

You just did not see such a sea...

At the turn of the century, Ujal enters the home stretch in the long journey of his quest. He finally finds himself in a space that allows him to embody everything conscious and accumulated, to unite the spiritual and the creative under a single body. In 1999, the old Baku chapel of the Apostle Bartholomew received a new abode –on the lower floor of the Temple of Michael the Archangel, and Ujal finds a new space for the realization of his plans – the painting of the chapel. And again drawings, plans, diaries, the study of canons of iconography. For five years, every corner, every square centimetre of the temple will be covered with delicate painting. Ujal completely surrendered to this work, having gone from worldly life, giving up all orders and abandoning material goods, as if feeling in that work that summit, to which he went all his life. His hurricane peacefully lay down under the arches of the temple and froze on its walls – in the unique frescoes left for us by Ujal Hakverdiyev. 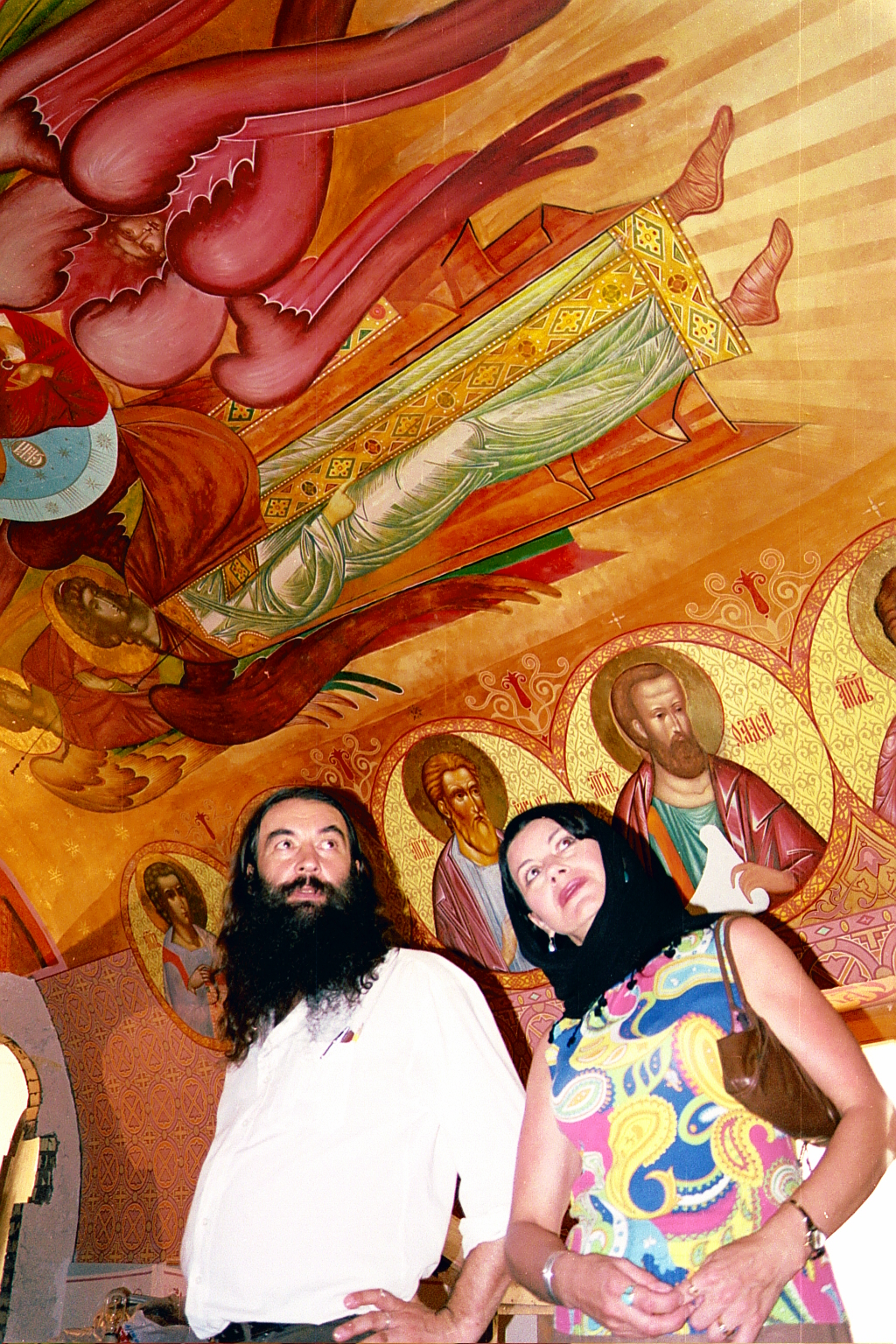 That amazing work, full of titanic tension and creative discoveries ended in 2004. Then the heart of Ujal stopped beating.

I am a ruined city

a city without walls.

I am an artist of this city

this city is my dream.

P.S. On the House of Artists you can see the inscription, which is already forty years old. From time to time it fades, erases, and then it is restored, tinted. This is the inscription left by Ujal – the artist of this city: Long live the painting!.. – N