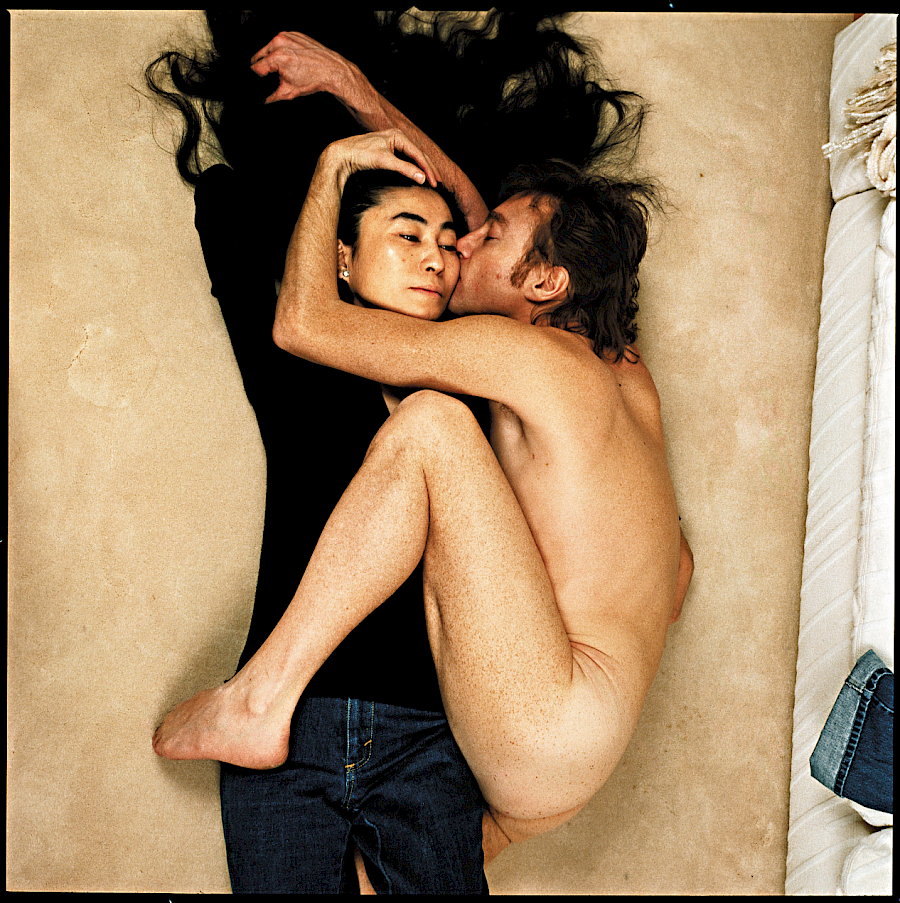 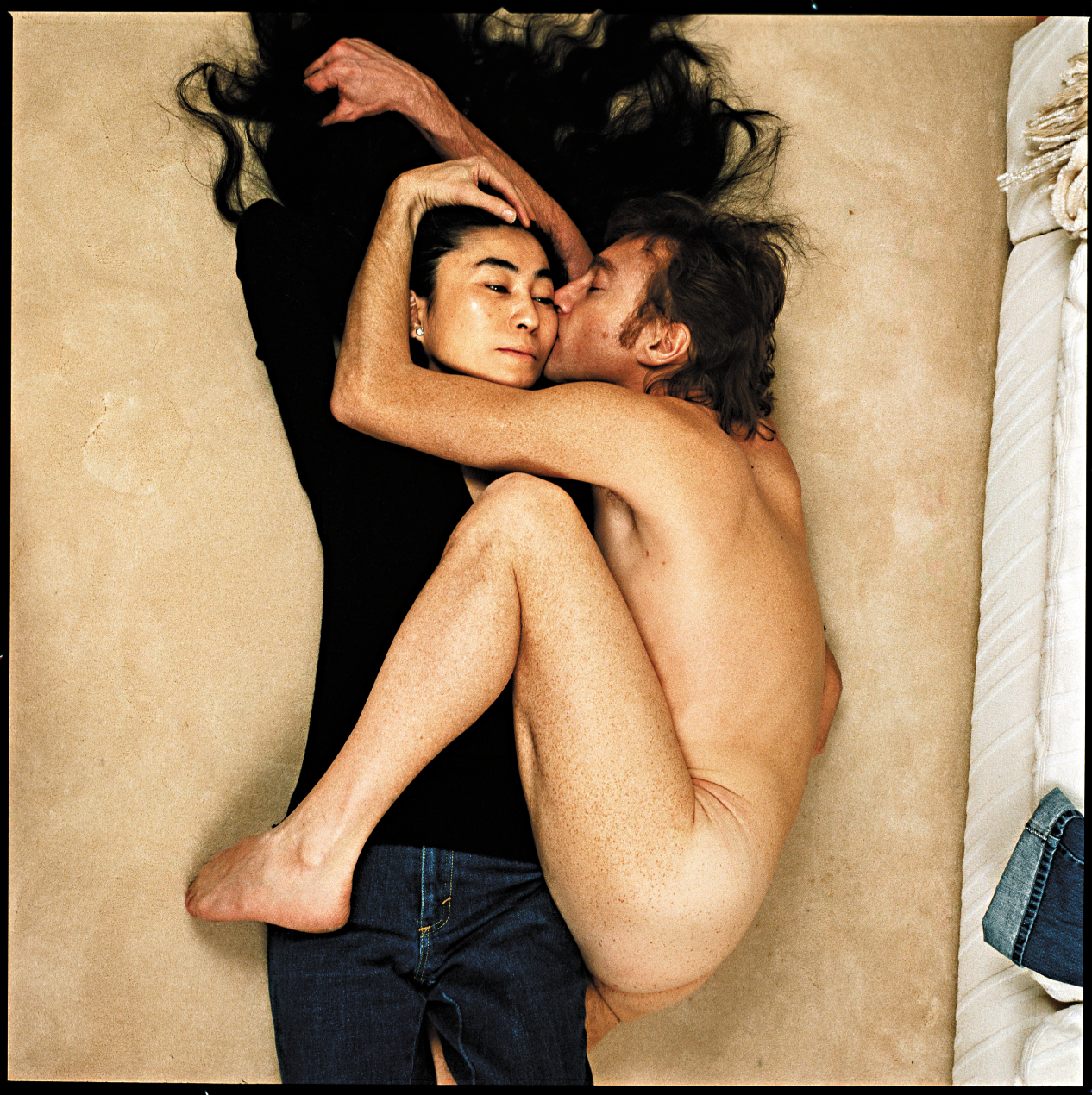 One December night in 1980 at Roosevelt hospital after a long but ineffective direct cardiac massage doctor Stephan Lynn glanced wearily at the clocks and fixed the time of death: 23 hours 7 minutes. Waiting spouse was brought the news. The woman fell down on the floor and went hysterical. Her name was Yoko. His was John.

The audio system in the emergency room by fate was playing “All my loving”. “Close your eyes and I'll kiss you. Tomorrow I'll miss you”, - The Beatles were singing. The ABC employee who was there at the hospital after a car accident limped to the phone and feverishly gave the shocking news, which would shortly interrupt a football match broadcast.

Intolerable and rebellious, sarcastic and ironic, little John was a real headache for his teachers and age-mates. As if he was afraid of nothing, there was neither rules no authorities to him. Though teachers admitted tomboy’s sharp mind, John studied worse than ever; he was seriously interested only in two objects – music and drawing. One of these hobbies became his whole life’s work.

Years later Lennon, starting a skiffle band Quarrymen, has laid the first rock into the history of the legendary rock band, which later made boom under name The Beatles. Nice looking guys, who wrote and played good music became idols all over the world. Fame entered their lives – with concerts, tours, big money, alcohol, drugs, sexual affairs… Intoxicated with the love of millions, which struck them, Lennon dared to say that they overtook Jesus Christ himself in popularity.

Child of the ocean

This is how name Yoko translates from Japanese, daughter of wealthy aristocrat, who provided her with prestigious education and residence in one of the richest and brightest cities of the world – New York. Material well-being did not keep Yoko from thinking about class inequality and other social issues, about unfairness of the universe. The girl searched for answers to bothering her questions and expression of her individuality in art. However, the public and critics could not understand her works. Being vulnerable as all people of art, suffering from the uselessness and insolvency, the artist tried to commit suicide several times and even underwent compulsory treatment in psychiatric clinic. And nevertheless she persistently continued to go the way which was bringing closer to a meeting of all her life. 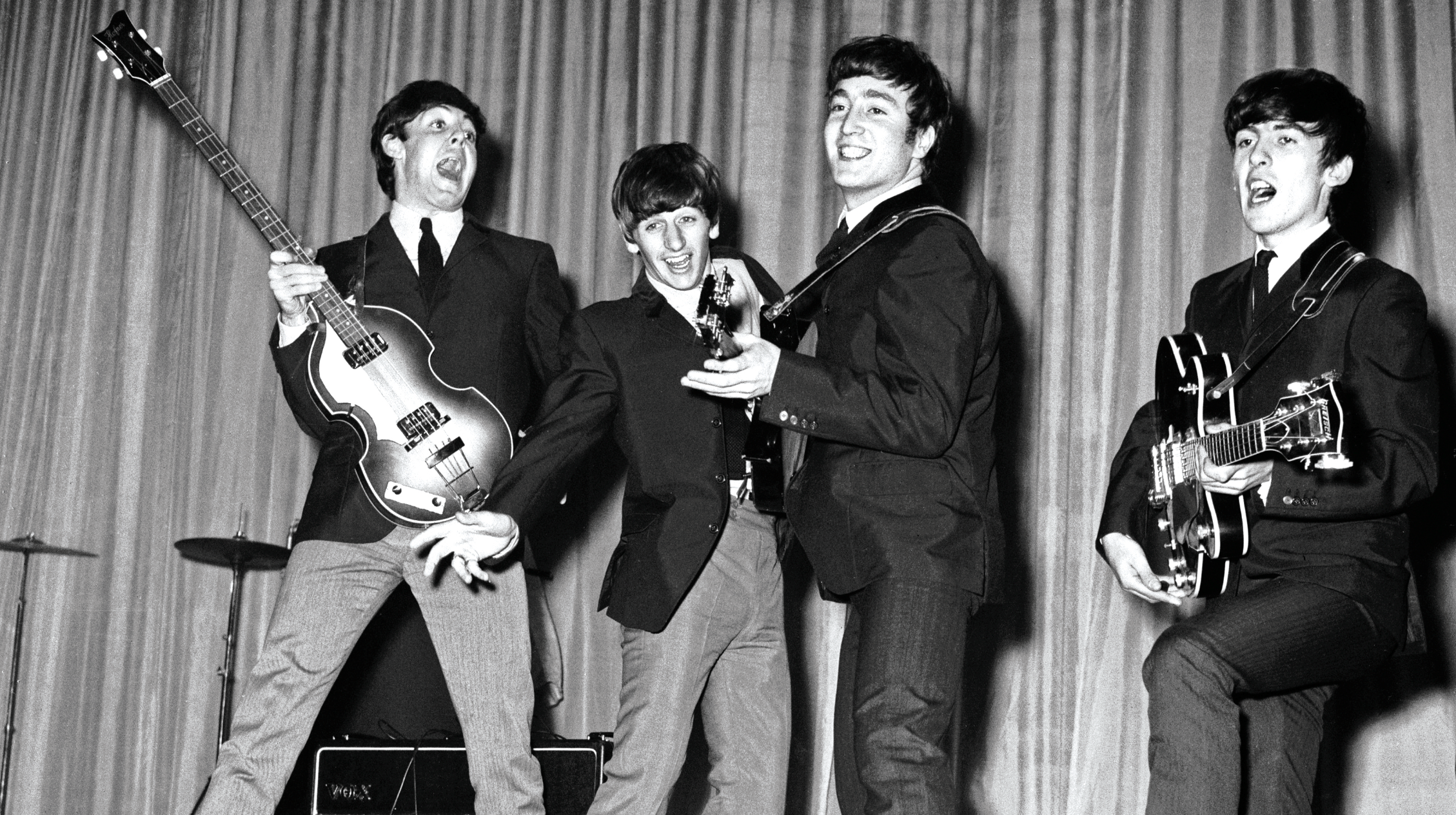 John’s euphoria from wide popularity began to pass, giving way to doubts and discontent with his own works, which was more visibly gaining commercial character. Always being proud of his independence, he suddenly saw himself deceived, involved in process of heartless, nearly mechanized hit manufacture for demanding howling crowd. And yet, John has grown a lot and in scope of the talent even outgrew his colleagues. Now he wants to compose more serious music, to return his internal freedom. But what these aspirations and experiments will cost him and his guys? Will he lose friends, wealth and family well-being?

The musician was married and had a child at the moment. He actually had everything, what anyone can dream of. Does he really need these changes? All these reflections tortured him. He needed answers.

In such mood, wishing to clear his head Lennon once he walked in Indica gallery, where were expositions of an exotic Japanese girl, an avant-garde artist, famous for conceptual happenings and installations. With his usual light irony on the face John mindlessly walked around expositions, without stopping near them for long and thinking about their meaning. But a ladder with a magnifying glass hanging from it made him stop and burst in curiosity like a little boy. He climbed up steps and, having grasped a magnifying glass, directed it up. The word “Yes” came out from empty space. Lennon was shocked: this word echoed in his consciousness like a searched sign, an approval of the wish, like a call for an action! 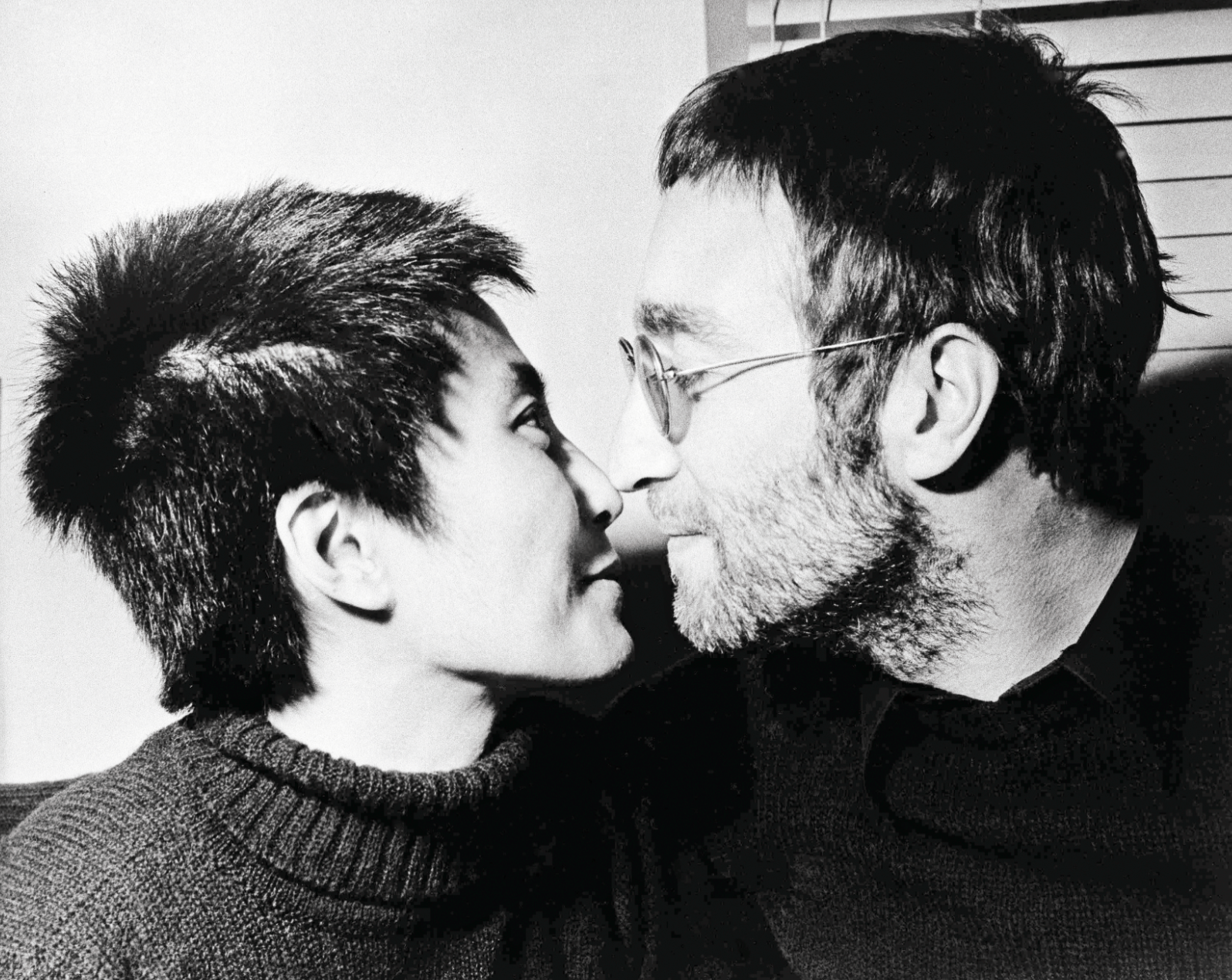 That day he met a woman of his life. He did not know it then yet. With long black hairs, thick brows and thin lips, 7 years older than him and twice married Yoko was not exactly in his taste. Having made an evil joke about one of her exhibits, musician left, sinking back in his thoughts again. And she followed him with her gaze, carving out his image in her heart. “Finally, I found a man, who I will love”, - later Yoko wrote confidently in her diary.

Feisty Japanese latched in Lennon with an iron grip. She started calling him, asking him out, sent short mysterious messages: “Breathe”, “Dance”…She wasn’t even embarassed to show up at his place, where he lived with his wife and child, and talk with him by phone at night for hours. They talked about topics bothering them both: art, human relationships, antimilitarism, social issues and the ways to solve them… At first, this weird artist made John confused, bordering with irritation. But the longer they communicated the more he got used to her, listened her assumptions, being imbued with them, admiring and growing into Yoko without noticing it himself. Having forgotten about spouses and kids, they became passionate lovers. Soon after Lennon’s wife caught them in bed together they officially divorced and committed their alliance. 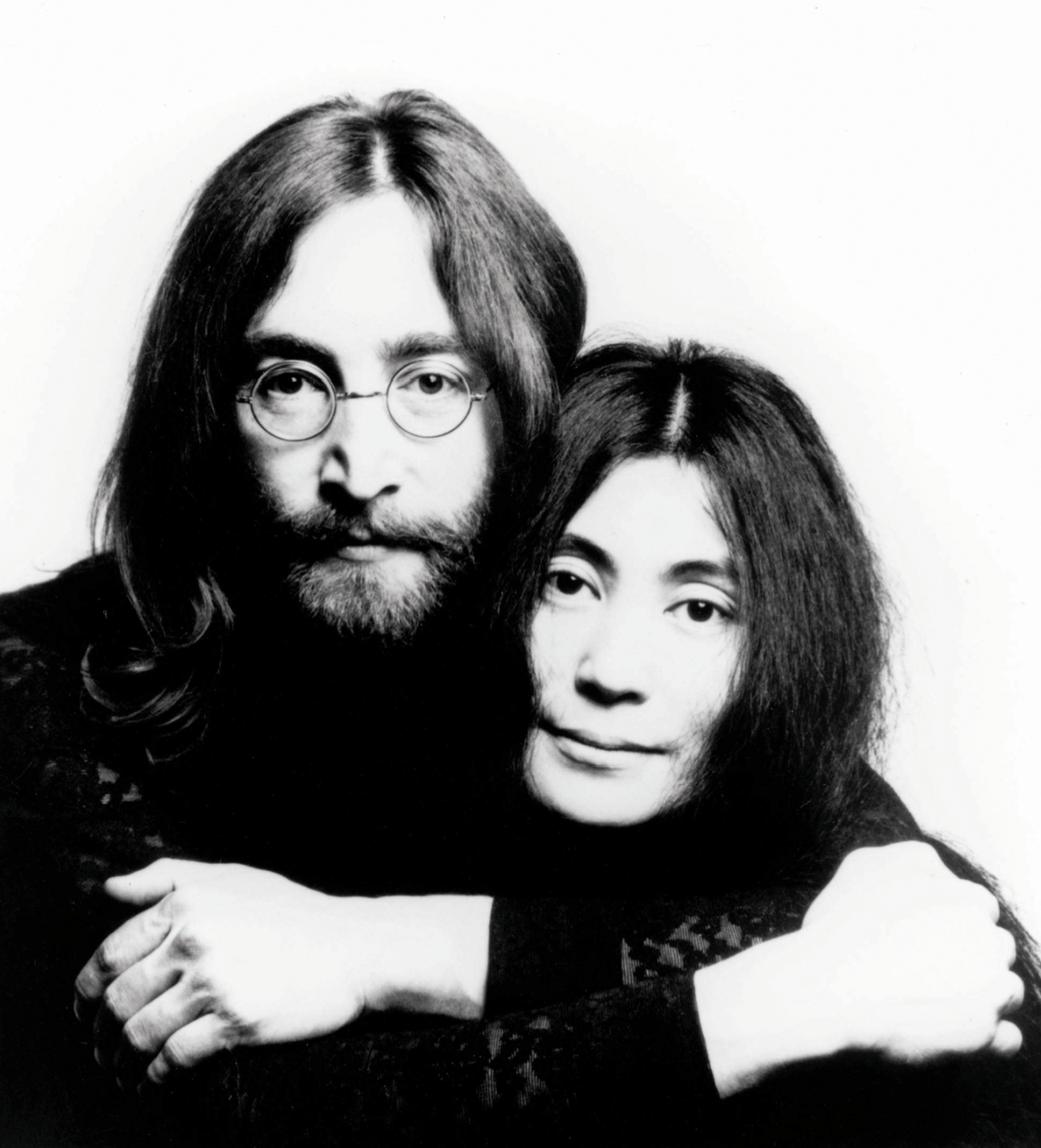 Being absolutely obsessed with this woman, Lennon needed her opinion in everything that was important to him. It got to the point when he started bringing her to repetitions, song recordings and by doing so violated a strict taboo, set by their collective: keep the creating process closed for others, and particularly for their women. Moreover, Yoko allowed herself to give musicians comments and advises regarding their job. Offended by unspeakable insolence and self-confidence of an unknown woman, the guys did not hide their frustration. All this offended John and made him distance himself from colleagues more and more.

When Beatles officially broke up, shocked and upset fans blamed Yoko in the collapse of the iconic band and named her a witch.

A particular interest of public caused their touching idea, which they realized on their honeymoon at Hilton Amsterdam. Journalists, who were used to scandalous actions of famous couple were excited for provocative show: expected John and Yoko make love in front of everyone. But it did not happen. In a room full of light, decorated with fragrant flowers and anti-war posters with their own pictures, spouses were lying in white pajamas absolutely innocent on a big bed. They were giving interviews all day, talked with anyone who was concerned about hot socials topics and sang in support of peace and love. This act of protest against war in Vietnam had a huge response, and later just married couple repeated it at Queen Elizabeth Hotel in Montreal. John even wrote his famous song Give Peace a Chance, which became the worldwide pacifists movement anthem. Exactly with this song half year later over half million people came out protesting in Washington against war actions in Vietnam. Lennon was truly proud. 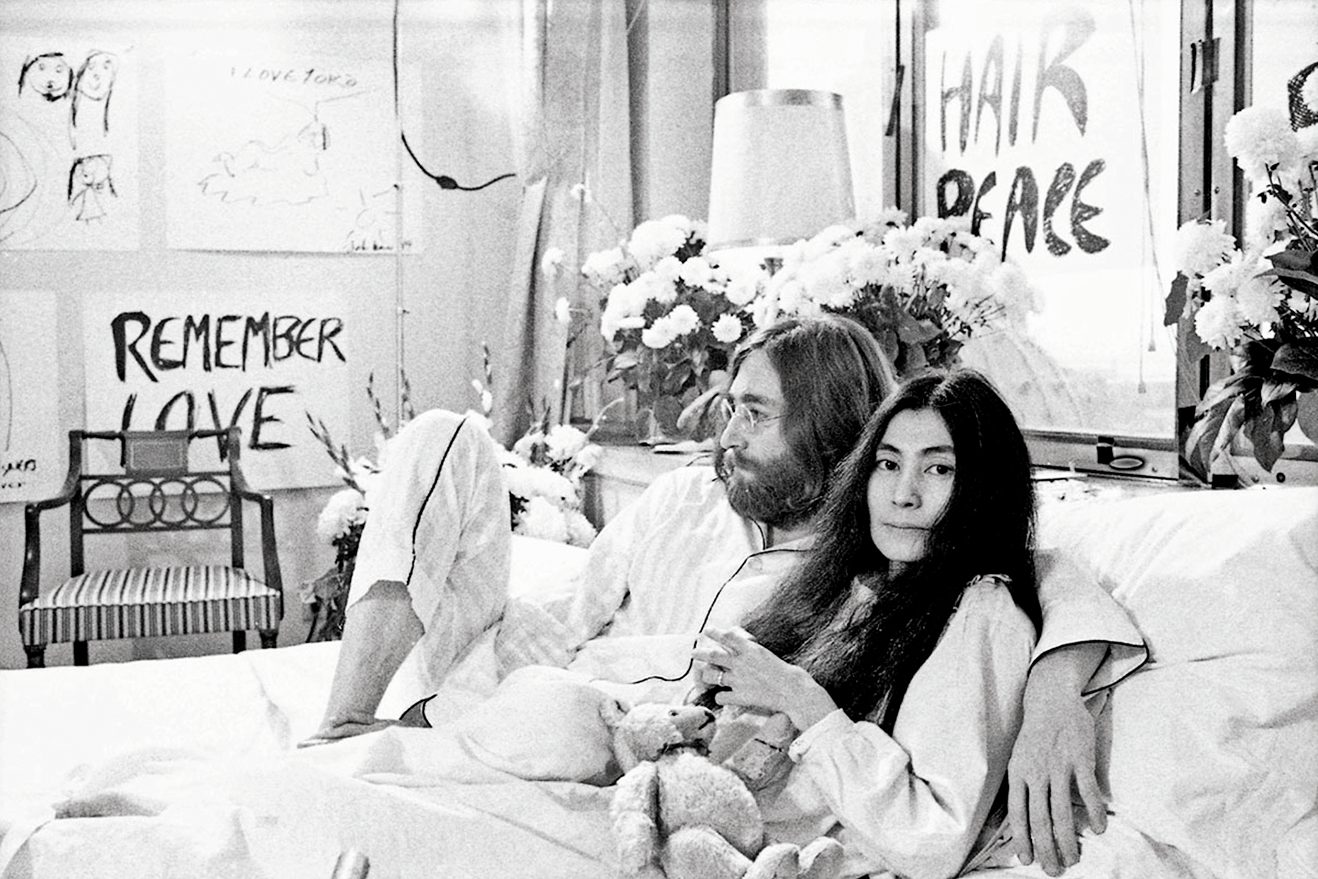 It is known that John returned his medal to queen as a sign of protest for participation of Great Britain in Nigerian-Biafran conflict and supporting USA in Vietnam.

Another song that made him famous as a romantic-utopian was Imagine, written under impression from Yoko’s book “Grapefruit” and her childhood memories in Japan during World War II. Lennon sat at the white Steinway piano in bedroom of his Tittenhurst Park residence and sang about how simple and wonderful the world could be without politics, religions, wars. And Yoko was opening the blinds in the room, and the sunlight was dispersing the darkness, symbolizing hope and enlightenment. Since then the song takes the leading positions in charts of the most influential and well-known compositions. It is performed at the most important ceremonial events. So, in 1996 Stevie Wonder performed it at the closing ceremony of the Olympic Games in Atlanta. In the 2005th Madonna sang Imagine within the charity project to help victims of a tsunami in the Southern Asia. In the 2006th Peter Gabriel performed this composition at the opening of the XX Winter Olympic Games. Since 2006 Imagine sounds accompanying the last minutes of the passing year at Times Square Square in New York. And in 2015 Lady Gaga with own accompaniment decorated with this song the opening ceremony of the first European games in Baku. 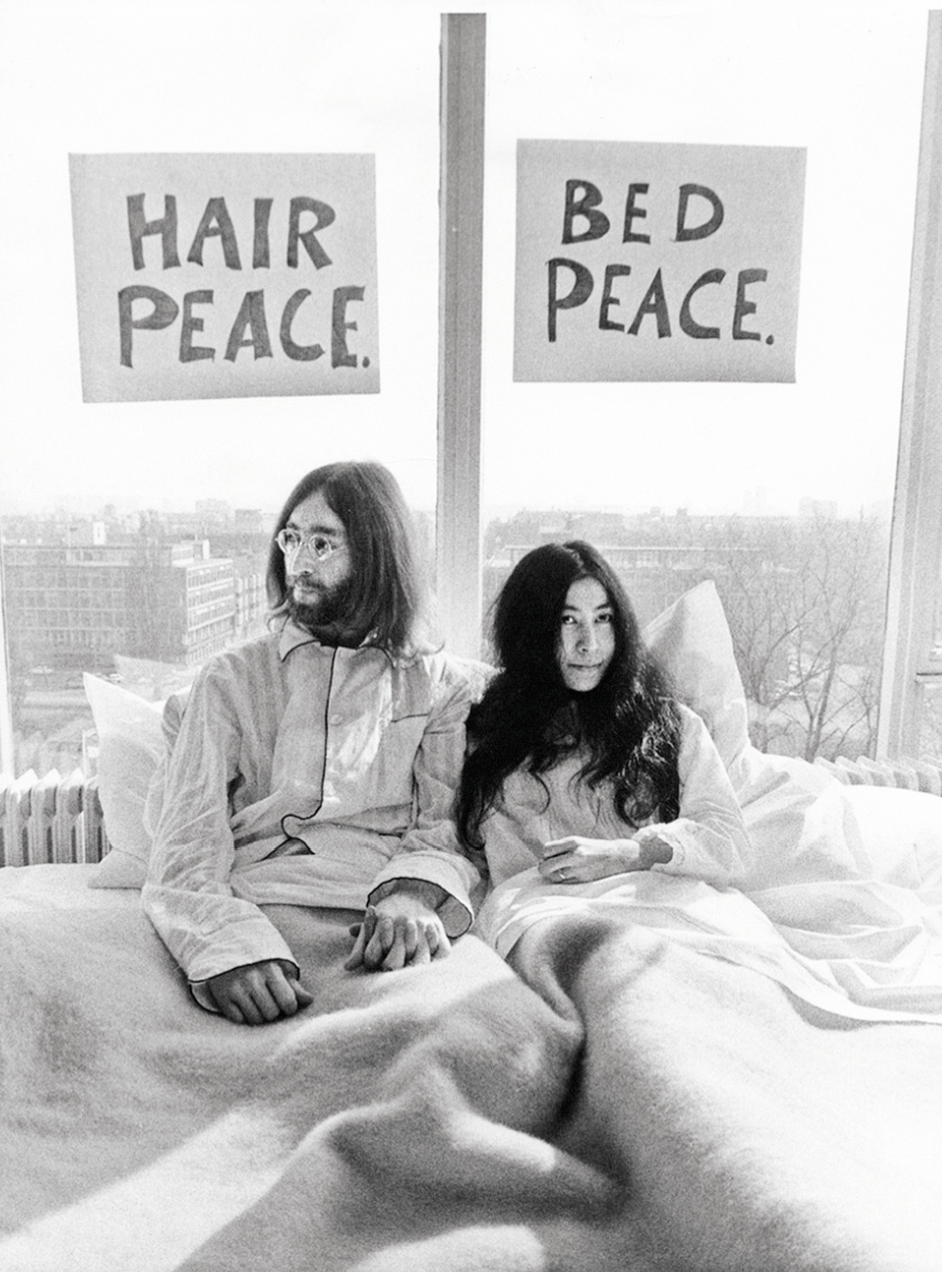 After their son Sean was born, Lennon went dark, fully dedicating himself to care about child and his wife, and also running household. Army of his fans was terrified, many people counted this as an artistic death and were deeply disappointed. And Yoko overtook on herself the financial part of family life: she was doing the counting, making investments, buying property, multiplying the mutual capital.

The silence, prolonged for five years, John interrupted with his new album Double Fantasy, composed together with Yoko, which was met by most powerful reviewers quite cold and acidly. Especially strong slap in the face was an advice of one critic to musician to “shut up until he had something to say that was even vaguely relevant to those of us not married to Yoko”. 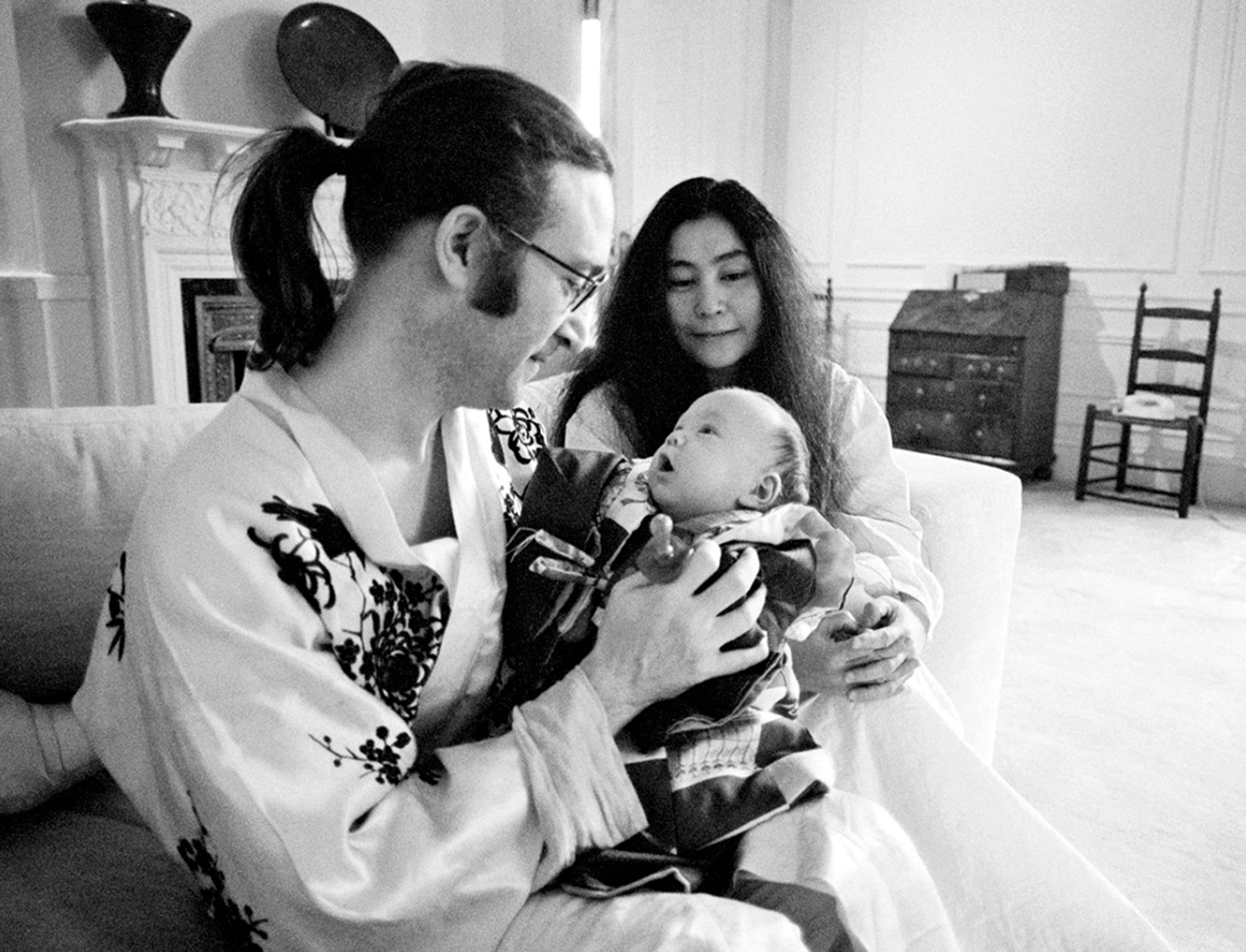 Probably, the same opinion also had Mark Chapman, who was obsessed with Lennon's genius, imitating him in everything. Five bullets were fired by him in the idol who disappointed him near The Dacota hotel in New York when John together with the wife came back home after exhausting day of recording and shooting. The world, shocked by this tragic news sank into mourning. All the mistakes and delays in art were forgotten. The album, the critique of which marred 40 years old musician’s last weeks of life, suddenly became wildly popular, selling numbers skyrocketed.

Widowed Yoko spent million dollars on making a Strawberry Fields memorial, which was organically fit into Central Park’s landscape, not far from the place of John’s assassination. This is where she scattered his ashes and where she wakes husband surrounded by faithful admirers. 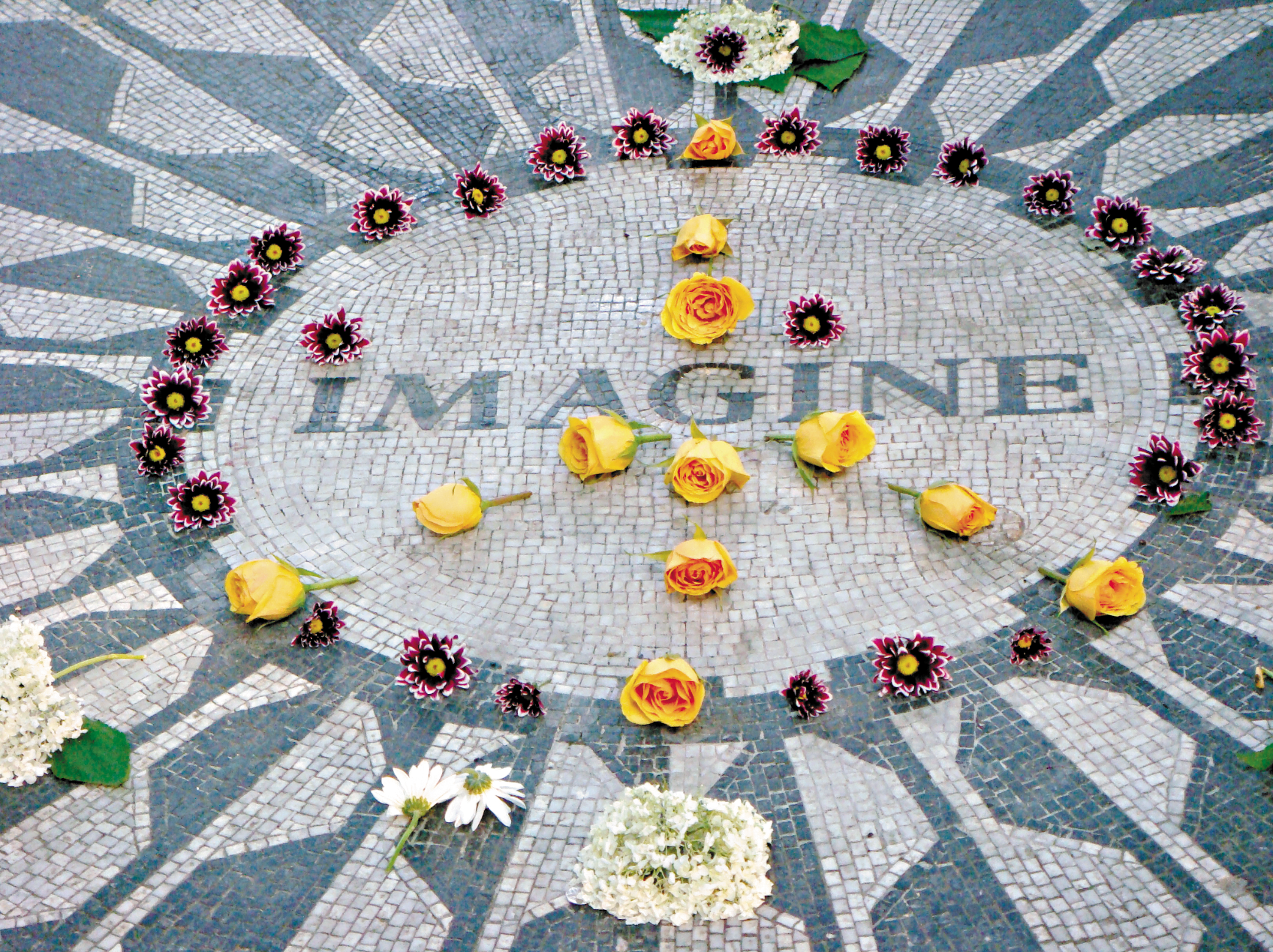 Tatyana Polyakova: About etiquette without labels