UNDER THE SHIELD OF HEAVEN 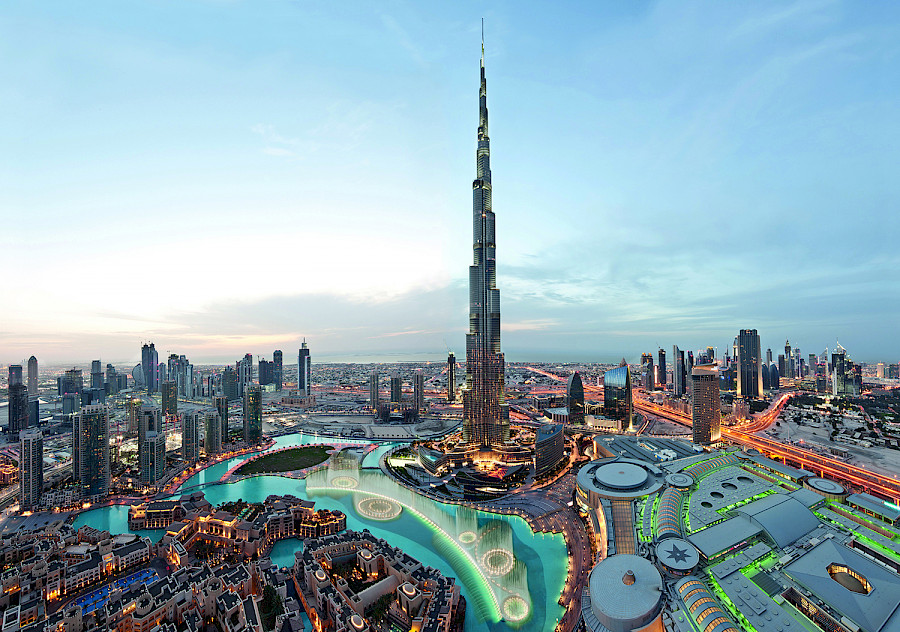 I CAN REMEMBER MY SCEPTICAL MOOD BEFORE TRAVELLING TO DUBAI: IT WOULD BE BORING THERE, I COULD SEE NOTHING MORE THAN SAND AND SKYSCAPERS… IF I HAD BEEN TOLD THAT WHEN I CAME BACK, I`D SMILE WHENEVER I HEAR THE WORD DUBAI AND ADD IT INTO THE LIST OF MY FAVOURITE CITIES- I WOULD NOT BELIEVE.

Mirage that will stay with you

One & Only – name of world-famous hotel chain immediately provokes romantic feelings in you. In this atmosphere which can easily host a sheikh, you will feel as if you are in a fairytale. A special, spicy and musky aroma in the lobby and a welcome-drink from a friendly (by the way, Russian-speaking) staff quickly refreshes you after a long flight.

The resort complex One & Only Royal Mirage is designed in the style of luxurious Arab palaces. Its territory stretches along the coastline for almost a kilometer. The windows overlook the Palm Island Bay. Three buildings of the hotel, smoothly interconnected with each other: The Palace, Arabian Court and Residence & Spa, are buried in 26 hectares of picturesque gardens. In addition to the buildings, there is also an exclusive Beach Garden Villa - not even a villa, but a real mini-palace: with a living room, two bedrooms and a sitting area, decorated in national style. 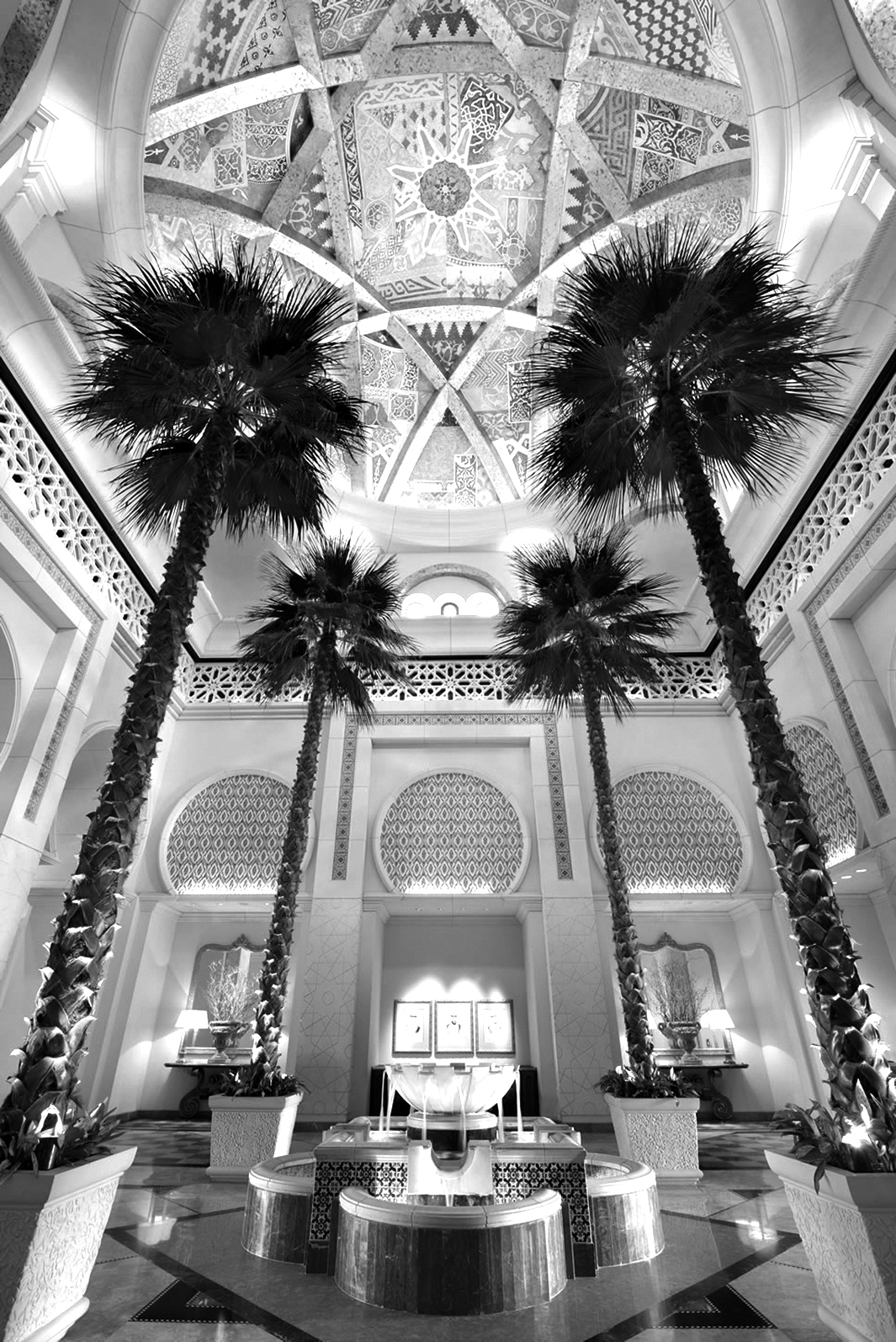 But the rest zone can wait! From the road it is best to visit the Spa-center, with its sweep and grandeur reminiscent of ... no, not the palace (they already bored you?), But the temple dedicated to the deity with an unearthly imprinted wellness: lined with light marble, with arches, dome, mosaic and, of course, traditional oriental lamps ...

The first thing I advise you to visit the hamam, where skilled masseuses from Morocco, Turkey, Tunisia will open the gates to you to the world of pleasures. Eastern traditions here comply with sacred: bath towel prethermal, deeply cleansing black soap and a special glove for scrubbing - in short, there is everything to feel updated and refreshed! 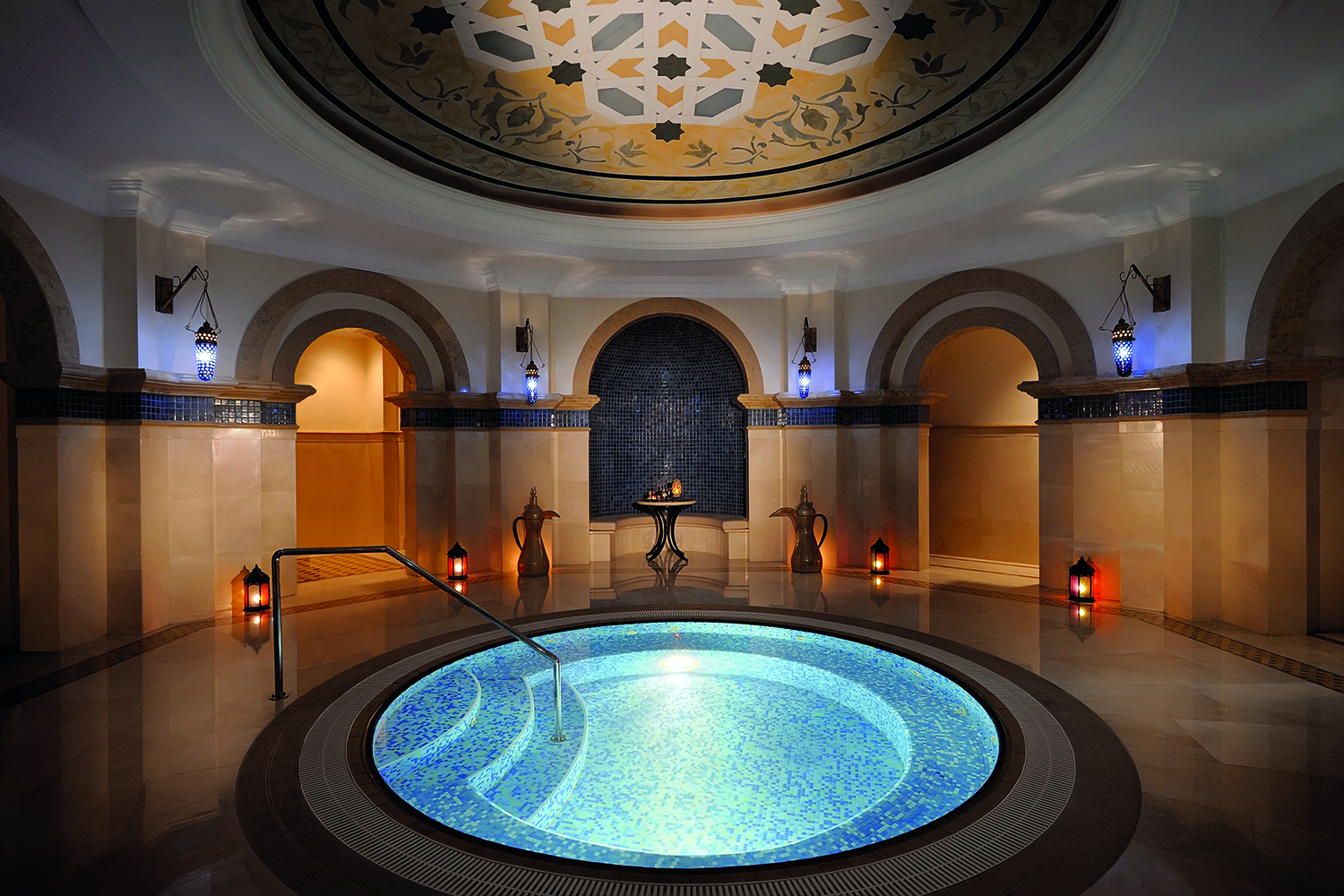 After water procedures, it's time for gastronomic delights. The cuisine of the One & Only Royal Mirage hotel will satisfy even the most sophisticated gourmet. The resort has eight restaurants offering masterpieces of Asian, Indo-European, Moroccan, Mediterranean culinary. All day the restaurant of Mediterranean cuisine Olives is opened, a formal paradise for those who prefer a meal a la buffet. For dinner, Moroccan restaurant Tagine opens: the decor for it was brought directly from Morocco, and spicy cuisine and equally exotic national music will be a real discovery for you. Selected seafood is served at the Beach Bar & Grill, which is located at The Palace. Not surprisingly, despite the large selection of restaurants in Dubai, hotel guests prefer to eat here.

No less vivid gastronomic impressions await you at the STAY restaurant in One & Only The Palm from the light hand of the chef Yannick Allen, awarded three Michelin stars. The bakery chef will even invite you to the holy of holies - to the kitchen where his culinary masterpieces are created, and treat him with compliments ... or complement, as you like: that's the name of a light treat served in anticipation of an order. And the know-how of the institution is a special dessert menu "Sweet library", expanse for sweet tooth and an irresistible skill for those caring for the figure. From the restaurant you can admire the famous skyscrapers of Dubai Marina; However, in the resort One & Only The Palm - one of the most picturesque places of the emirate - they are visible from everywhere. 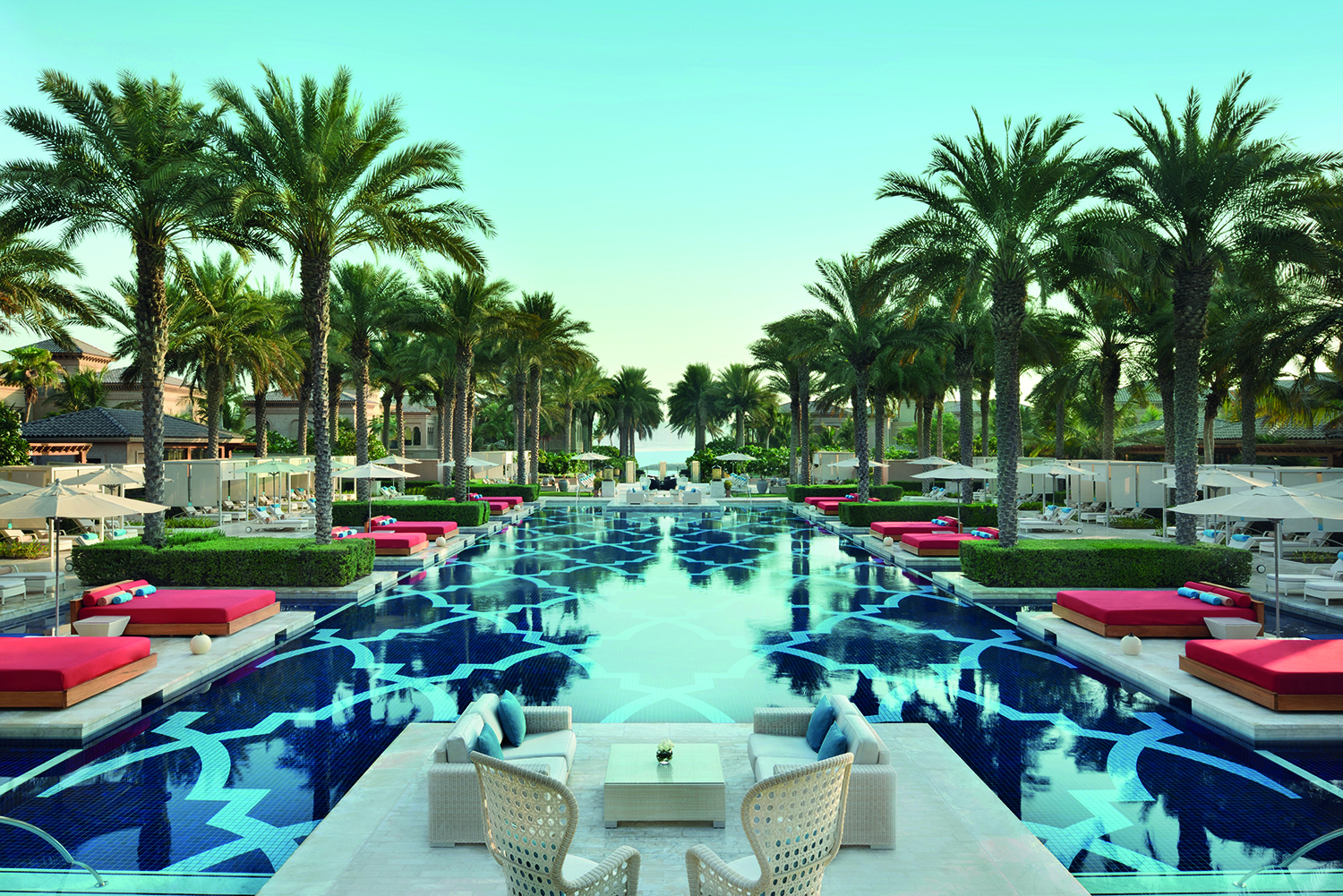 From the private quay of the One & Only Royal Mirage, it is easy to get here and back on a private or public boat. One & Only The Palm is a real oasis of serene rest in an elegant, secluded setting. Lush gardens, amazing fountains, the watery surface of the pools and the sparkling shine of the sea give an unforgettable experience!

Lovers of outdoor activities won`t get bored either. They will find classes to their liking: sailing, kayaking and sailing Hobie Cats, windsurfing, water skiing, fishing, snorkeling, scuba diving, swimming pools (with temperature control), beautiful beaches - all to services of tourists. Do not forget the ground sports: here there are tennis courts, and lawns for golf, and grounds for pentaquin, volleyball, basketball. You can go horseback riding or go on a desert safari.

Those who are used to perceive Dubai as a city of the future, it is easy to surprise them with the past. For a trip back in time it is enough to visit the historical district of Al Fahidi and the Dubai Museum, where the oldest buildings are located. The Deira district in the eastern part of the city is popular with lovers of traditional bazaars. It was here before trade was concentrated here. Spices, henna and other traditional assortment are always found in Deira Grand Souk (aka Spice Souk). In Gold Souk you understand where the name "the city of gold" comes from. In Deira there is also the first local school - Al Ahmadiya, built in 1912. To get acquainted with the traditional crafts, see the houses of the sheikhs Obeid Bin Thani and Said Al Maktoum, as well as the fortress of Al-Fahidi, where the museum is now, in the Bur Dubai area. At the same time, visit the Cultural Cooperation Center of Sheikh Mohammed, where cultural meals and tastings of national dishes, Arabic language courses are organized, excursion tours are organized. Its motto is: "Open doors are an open mind." Here, in Al-Fahidi, in the old Textile Souq market, you can stock up on silk, cotton and embroidery. At sunset, ride along the Persian Gulf, filled with ships scurrying over it ... That's it, the breath of old Dubai! And with an appetite, go and try kebabs at the famous Iranian restaurant Al Ustad Special Kabab. He has been working since 1978 and is famous not only for delicious cuisine, but also for the waiter who decorated the wall with the selfies with his clients, including son of a local sheikh. 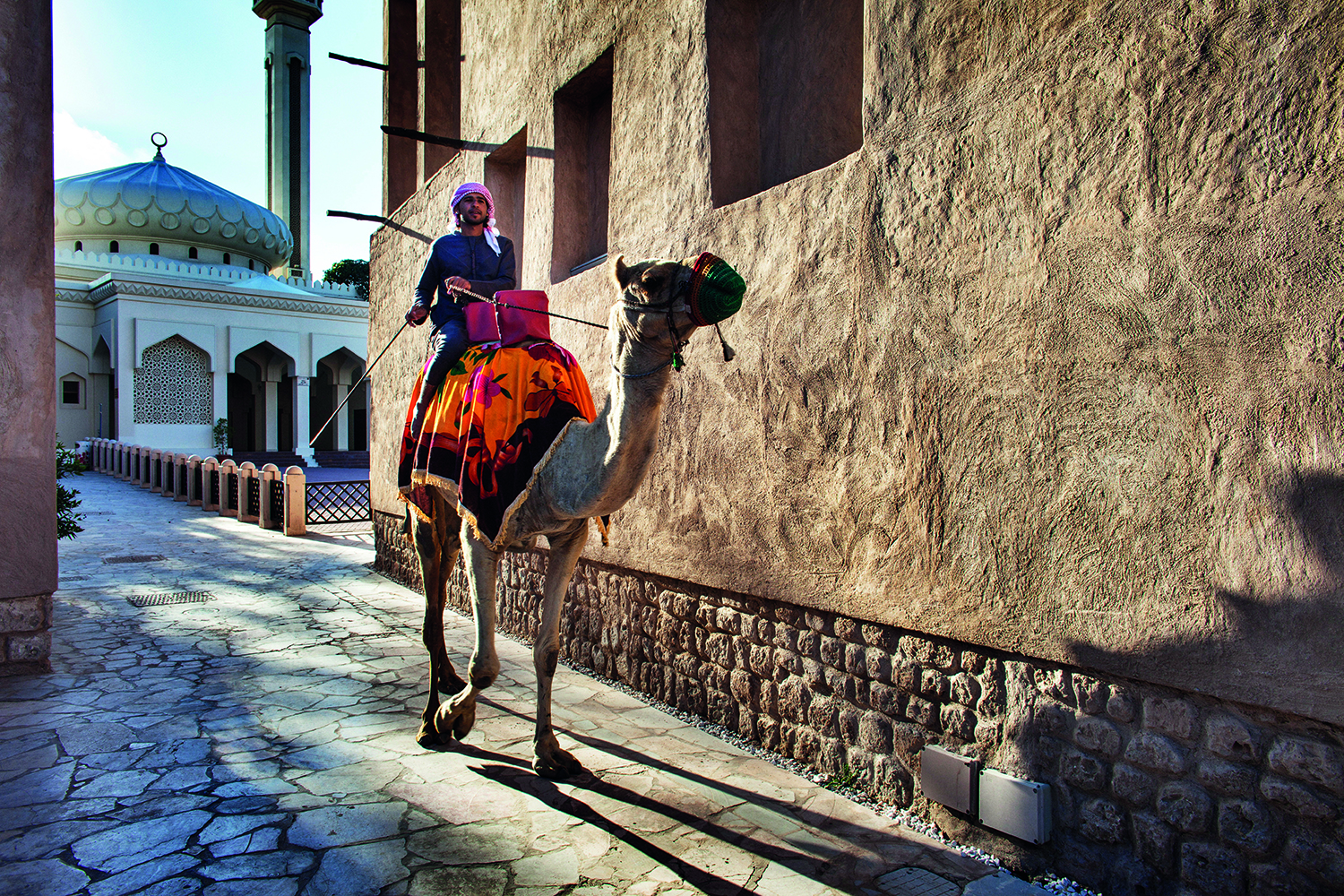 Flight over the desert

Imagine: at sunrise, you climb on a balloon 1200 meters up.

In front of you a stunning panorama of golden sands and emerald oases ... With the help of Balloon Adventures and Platinum Heritage, this dream is realizable. Set aside the camera, enjoy the feeling of flight and the sound of a manual falcon flying around. Sunrise over the desert is an unforgettable sight!  ...

And on the ground, a delicious breakfast will be waiting for you in the Bedouin tent. Acquaintance with the desert and its inhabitants on the vintage Land Rover'e 1950 release will complete an exciting safari. 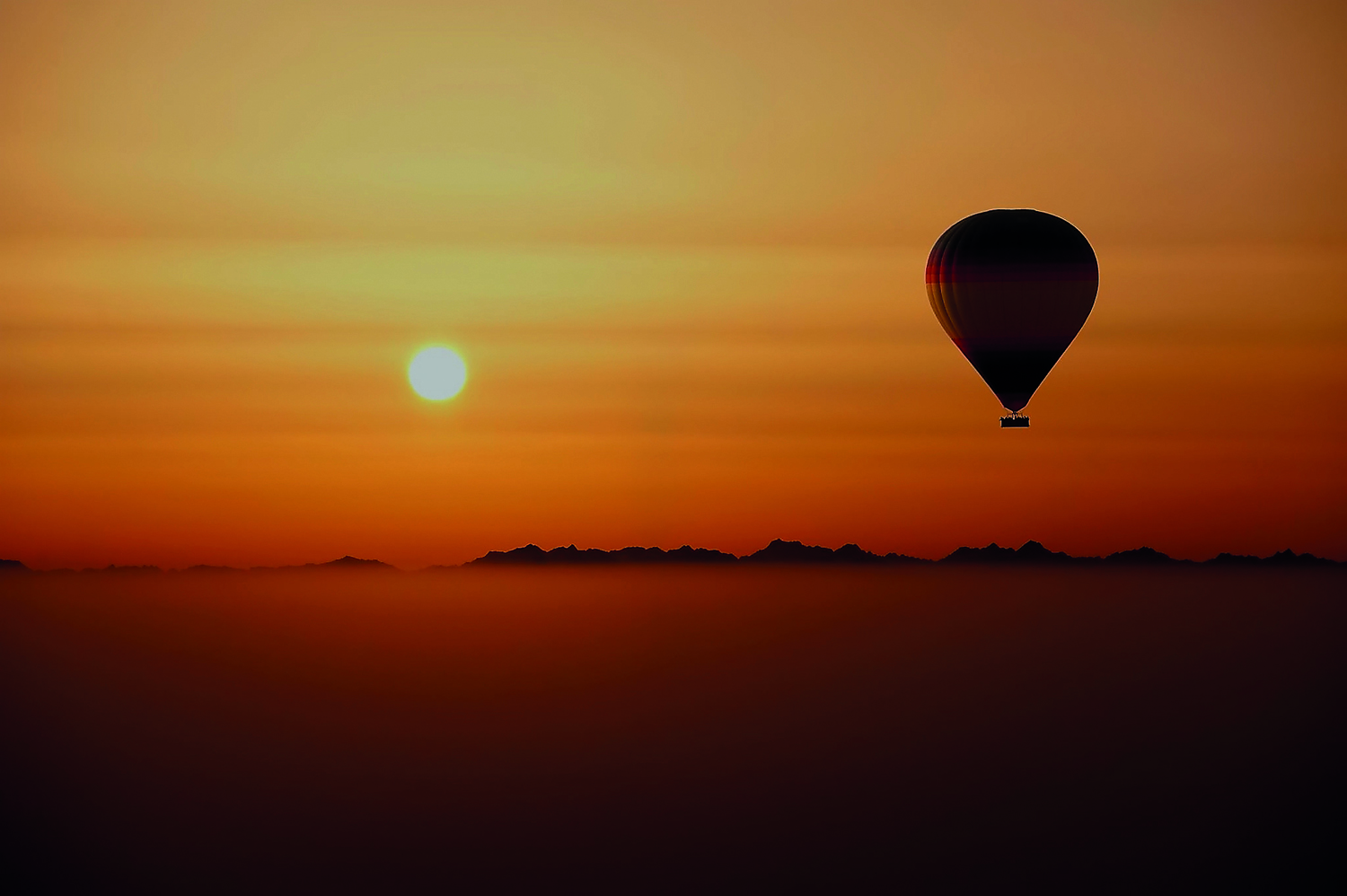 Head in the clouds

Play on the contrasts: after Deira visit the observation deck of the skyscraper Burj Khalifa - the tallest building in the world, whose spire is visible for 95 kilometers. Be sure to take photograph of the buttons in the elevator - you will never see such a quantity anywhere else!

One of the most fabulous impressions from Dubai is the kind of dancing musical fountain from a height of 828 m, at sunset. Experienced travelers can go up to the 148th floor, where the world's highest observation deck At the Top SKY has been opened since 2014. 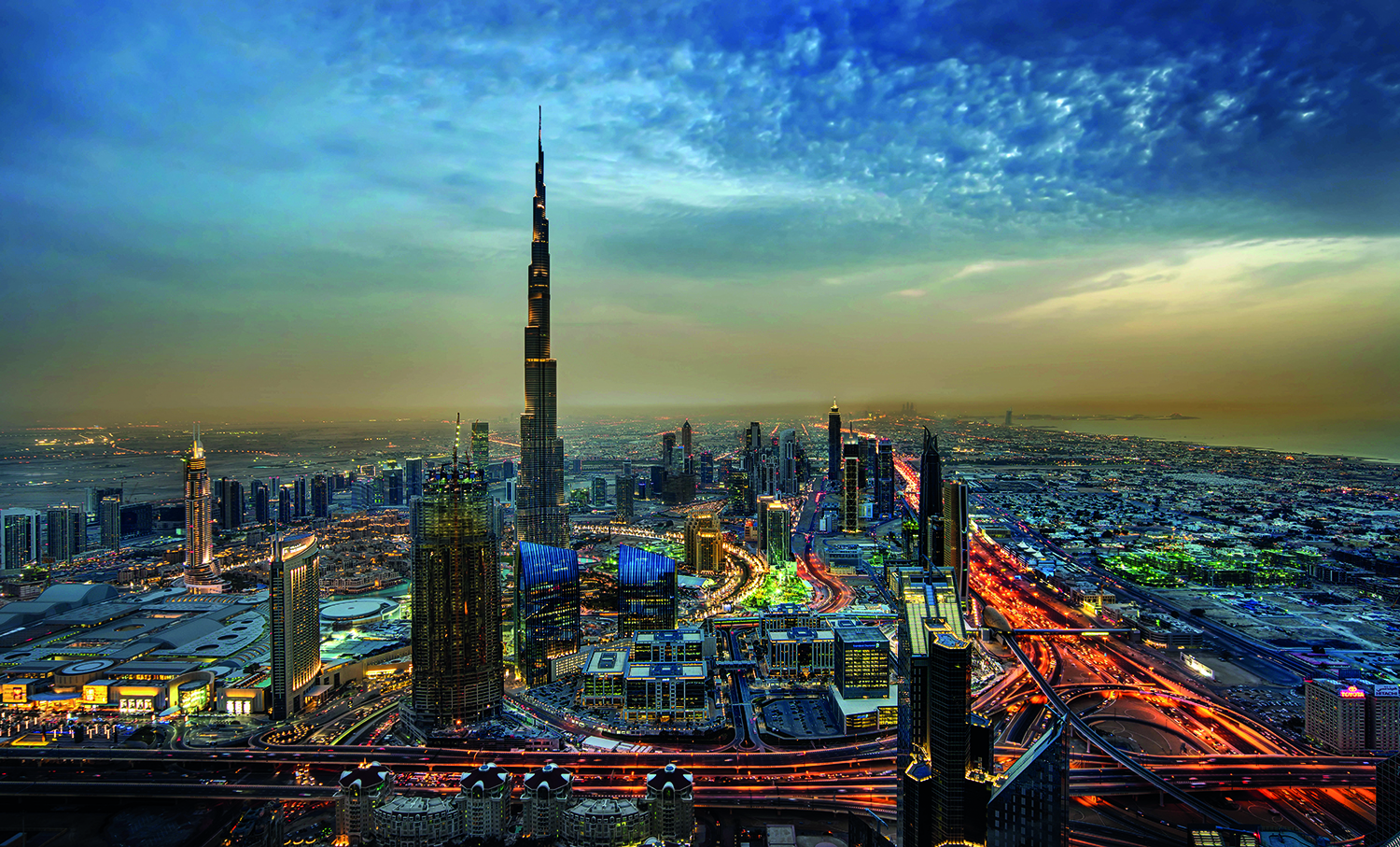 In honor of the beautiful inhabitants of the desert, one of the best spa resorts - Al Maha, A Luxury Collection Desert - is named, just 45 minutes from the city, about 8 km along the dunes. In the territory of the exclusive resort hotel, wild animals are walking freely.

Tents combine luxury with the traditions of the Bedouin Arabia. Each of the 42 individual suites overlooking the desert has a temperature-controlled swimming pool, sun terrace, a large bedroom with a seating area and a spacious bathroom with hydromassage.

The restaurant Al Diwaan has a wide selection of dishes. Breakfast is partly served on the menu and buffet style, lunch consists of three courses, and a dinner of five. You can settle down either indoors or on the terrace with a view of the golden desert spreading around.

In the Timeless Spa-center you will be offered the most suitable kind of massage. There is also a gym, a large swimming pool, a hot tub and a relaxation area. 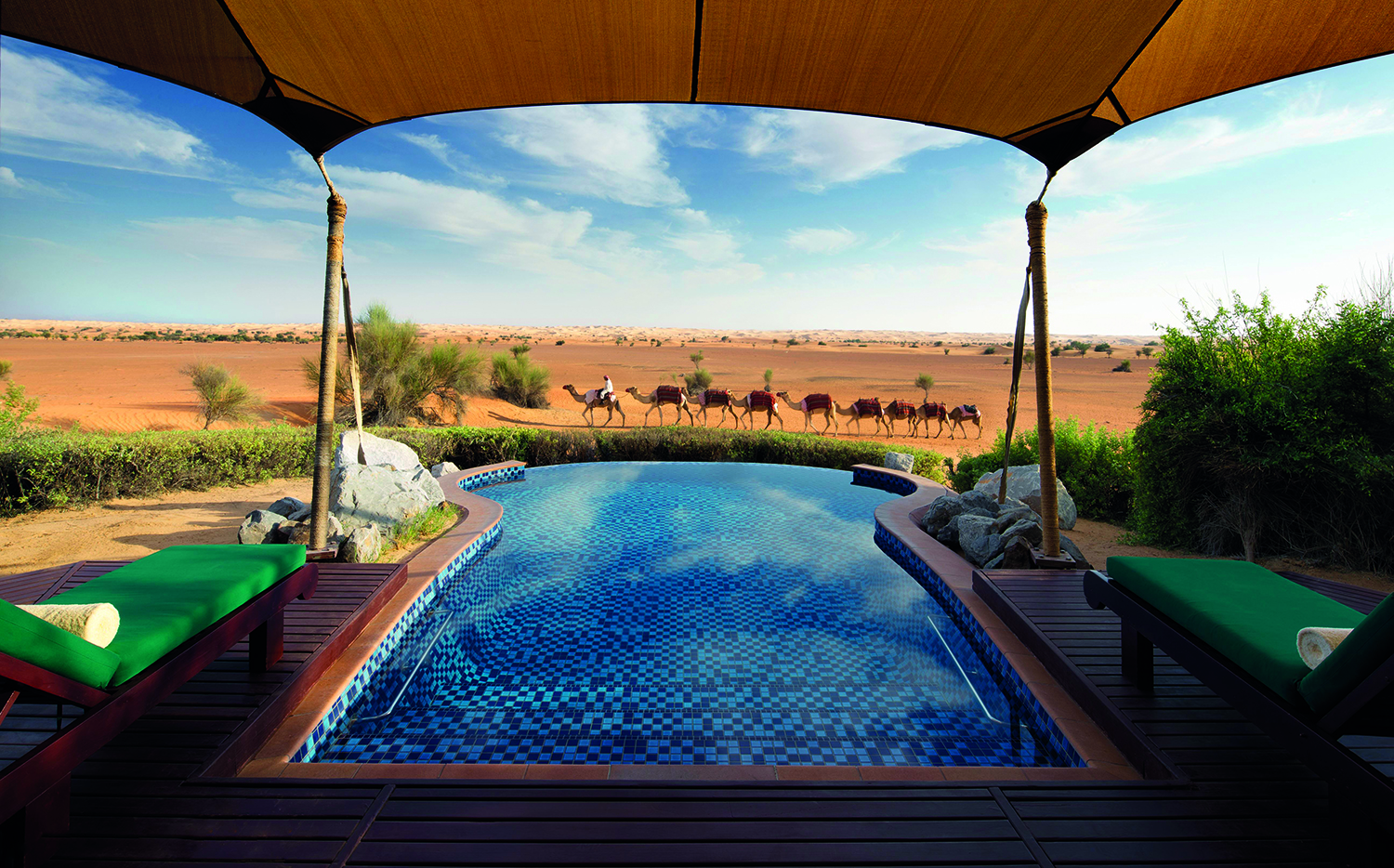 After the idyllic desert, you are not very willing to return to the industrial anthill! But you do not want to miss the new pride of the cultural and entertainment life of Dubai - an unprecedented show of La Perle by Dragone in the Al Habtoor City area? This show, which premiered on August 31, 2017, is fundamentally different from everything that circus and theatrical art knew. The creator of the 90-minute performance was Franco Dragoone, one of the most famous directors. 65 artists from 23 countries take part in the show, and each brings their own unique set of talents and skills: crazy bends on motorcycles, jumping into the water from a 25-meter height, dizzying aerial acrobatics, etc. In front of your eyes, artists challenge the laws of physics! All these miracles take place not only on stage and above it, but also under water, in a specially equipped pool. 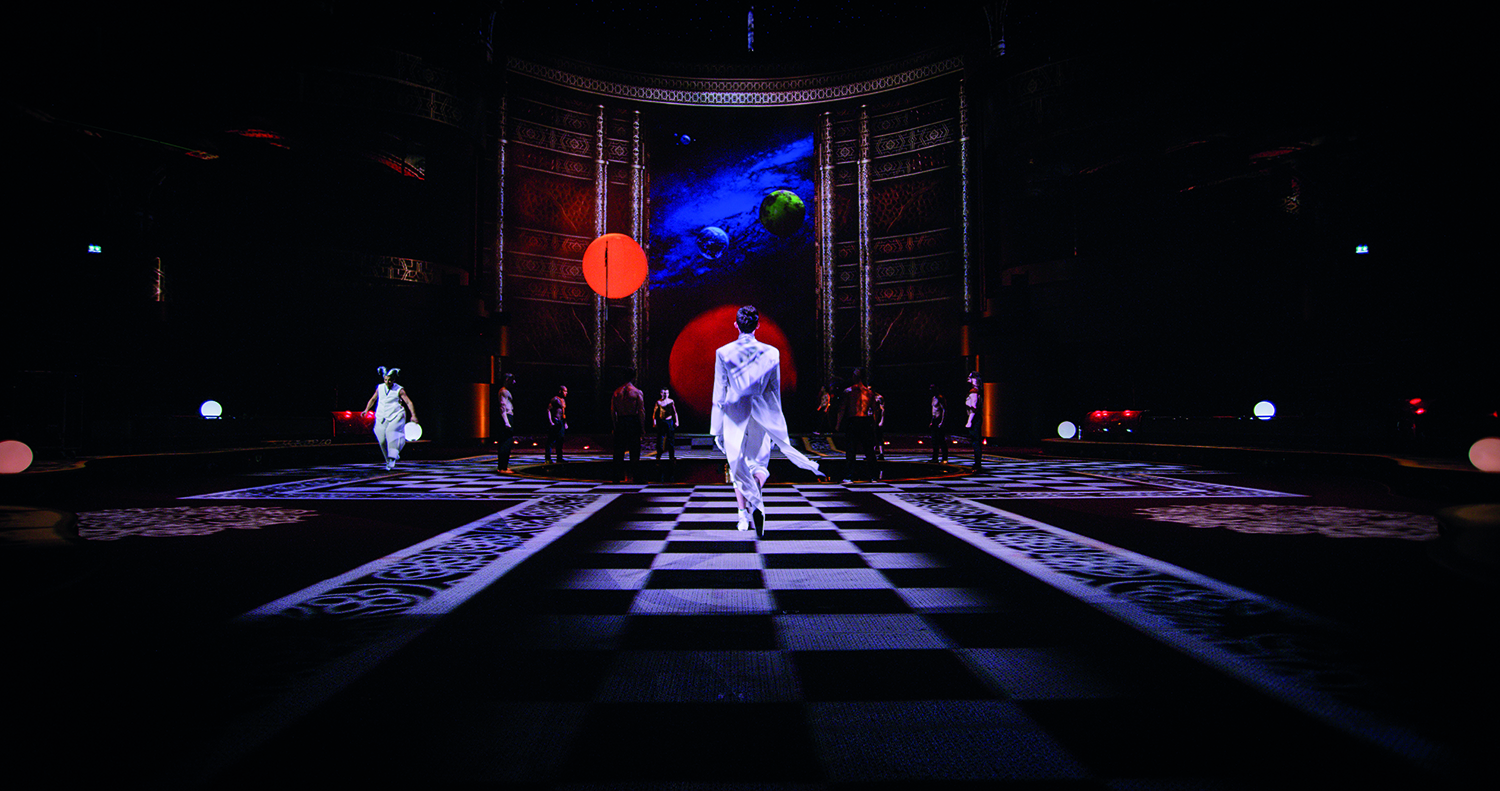 My final impression of Dubai was a trip to the largest in the Middle East complex of theme parks Dubai Parks & Resorts. This is the place where any adult has the right to become a child, enjoying all sorts of attractions - from the theme park LEGOLAND® Dubai to the water park, Hollywood studios and even local Bollywood! By the way, about the latter: the special pride of Bollywood Parks ™ Dubai The Raj-Mahal Theater for 850 seats. On its stage will go musicals in Broadway style, but on the subjects of Indian cinema. Every day in the theme park you can see a total of up to twenty performances, played on five stages. 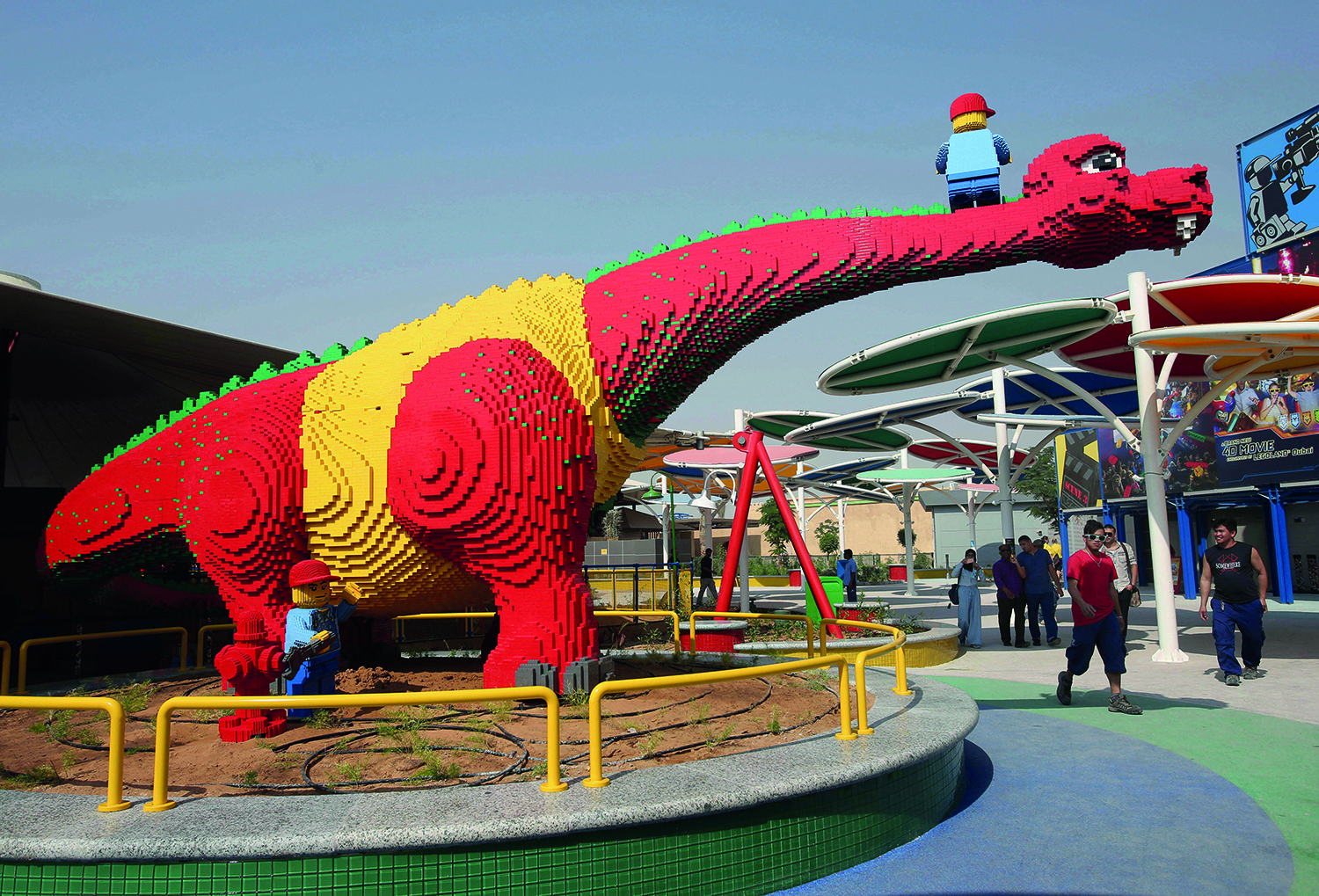 IN THE FOOTSTEPS OF “SCHIAPARELLI”