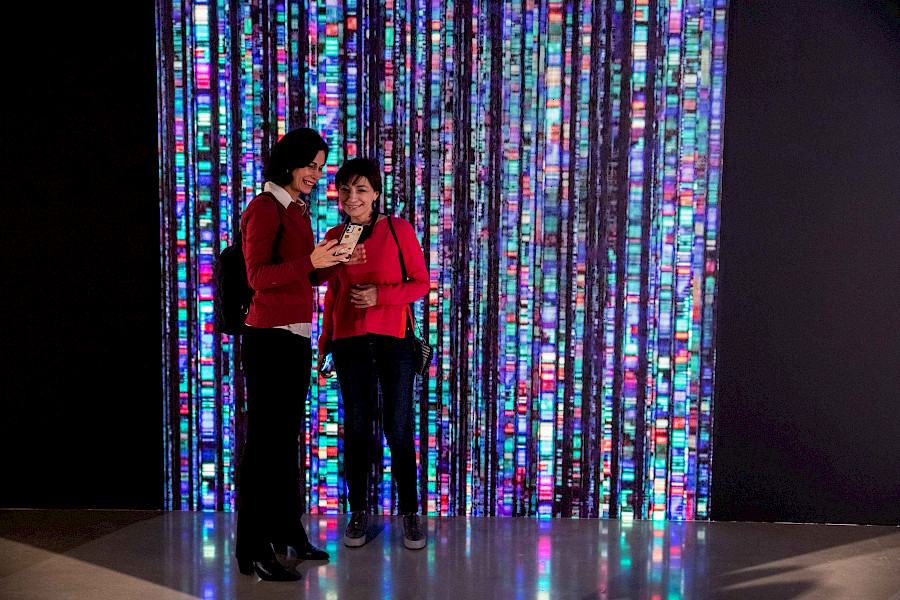 Throughout history, visual language has been used to encode meanings and implications. People have been “verbalizing” their thinking since ancient times by creating images to convey ideas. The ability to react to hypothetical situations played an essential role in abstract thinking throughout history. As evidenced by the abstract ornaments on the oldest artifacts, abstract language was used in art as early as ancient times. According to the aesthetic concept of abstract language, creativity is a reflection of the laws of the universe hidden in the external, alluvial phenomena of nature.

As a result, the artist expresses the regularities consciously or intuitively through the ratio of abstract forms, in which the qualities of line, shape, proportion, and colour convey meaning directly without the help of images. Abstract creativity comes to represent the universal nature of globalization through the art of modernism and postmodernism, working with the primary elements of visual language. In light of the fact that we are the descendants of the people who once created a visual language, it seems appropriate to recreate ancient meanings and update traditional knowledge to fit modern realities. Considering that the prefix “meta” partly overlaps in meaning with the Latin prefix “post”, conceptualization of the new aesthetic and ideological paradigm has a very special dialectical connotation.

In the history of mankind, objects and nature have been observed and described, and with the help of imagination, a completely different dimension has been created, sometimes visualizing non-material concepts like emotions, thoughts, and religious beliefs. It is through such ambiguous ideograms of primitive people that we can observe on the rocks of Gobustan and Gemigaya that we can find the basic foundation for various types of art. One of the most striking examples of the embodiment of the meta code in sculpture is the stone plastics of ancient Turks: vertical sculptures in the form of human figures, characterized by symbolism and schematics, built in burial grounds, known
by Orkhon script monuments and as Balbals in modern art criticism. As a form of communication, Carpet Art encodes reality into a system of significations. The carpet represents all of the worldview of the people expressed in signs and as a method of visual self-expression.

During the Middle Ages, miniature art served as an encrypted pictorial letter, which despite its realism is more code than illustration. Using imagery and color to convey symbolism, the miniatures depict reality in a conditional way. The idea of comprehending the world in miniature is achieved through harmony. As for the meta code, it's impossible to ignore the semantic ambiguity of Arabic and the calligraphy based on it, especially when it functions as an important part of Islamic architecture.

In the “METACODE” exhibition, 20 Azerbaijani artists from different periods share their works, revealing the culture codes of the nation. In this research project, the curatorial concept is based on the theory that the cultural code has evolved through a hidden language of symbols and lines, reflected in various artistic forms. The exposition is based on the works of artists of the “post-Perestroika” period in dialogue with artists of the new century. Although the artists experimented with generalization, geometrizing, phoneless compositions, and trying different textures during the 1980s and 90s, they were unable to find recognition for their work. The Soviet School's figurative and descriptive approach in their paintings changed to an abstract and geometrical approach. In the work of the new generation of artists, cultural codes, some abstract subconscious messages take on an inseparable relationship with national identity, philosophy, history and politics, while being visualized in technology's language.

The exhibit includes works from the collections of Azerbaijan National Museum of Art and Baku MoMA.