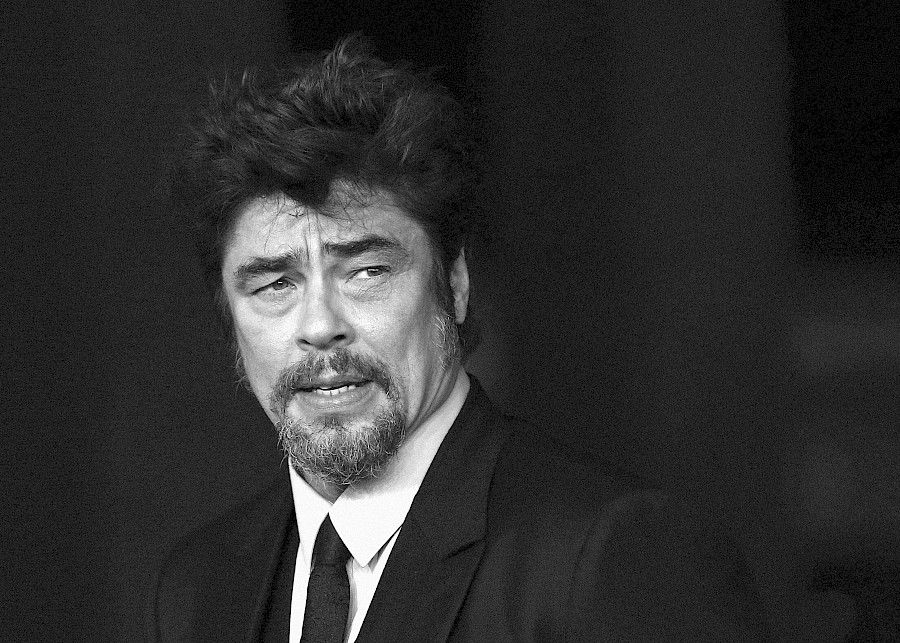 Thick eyebrows, sensual lips, dark circles under thoughtful eyes - such a portrait pops up in imagination when it comes to one of the most interesting figures in modern Hollywood, Benicio Del Toro. For the role of a Mexican policeman in Steven Soderbergh's film "Traffic" (2001), the actor received both Golden Globes and Oscar. But at first Benicio wanted to become an artist, while studied acting out of curiosity, and only when it happened to play a small role in the thriller "License to Kill", his interest grew into a profession. But in his recent work - role in the film "The French Dispatch" - the actor finally managed to combine both his passions: painting and acting. Benicio Del Toro himself told us about the actor's vicissitudes of life in an exclusive interview.

Is the role in Wes Anderson's film "The French Dispatch" your first experience with this director?
I am very lucky that he included me in his cast, which, as you know, is almost always the same. I suspect, that none of his regular actors wanted to play a prisoner, which is why this role went to me. I did not know what to expect from Wes Anderson, and no one explained anything to me. They brought me to the French countryside and settled me in a hotel where they did not even serve rooms. The director advised me washing less, and quit shaving altogether. I went through a real nightmare that morning! First of all, I had to run to a restaurant where breakfast was served at certain hours, and if I did not come on time, I would have to stay hungry. Anyway, it all wasn't for me... But the real fun started in the night. When I, tired after filming, returned to the hotel, the most famous Hollywood stars flocked there: Tilda Swinton, Adrian Brody, Bill Murray, Timothy Chalamet, Francis McDormand, Anjelica Houston, Owen Wilson, Christoph Waltz and others - as if they all came to Oscars. Wes Anderson sat down in the middle and talked literally about everything - from recent set to films by Jean-Luc Godard and the features of local cuisine. And I wanted to sleep, because in the morning I had to wake up at six again, I fidgeted on my chair, waiting for the dishes to stop serving... But even after the dinner, no one thought to leave. When I asked Wes if I could leave early, he was very surprised: "Of course, leave at any time!" But everyone stayed put, and I decided to stay, too. Over time, I got used to it, even had a taste. Now I also have a habit of discussing the set, except there is no one left-after all, such a family atmosphere happens only on the set of Wes... 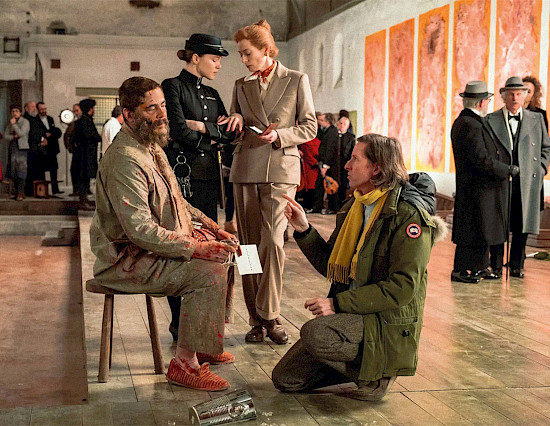 At first glance at Moses Rosenthaler, your character in the French Dispatch, it becomes clear that you have not managed to shave throughout the whole filming. Where did you look for inspiration to create the image of a prisoner artist?
This is not the first time I have played felons, drug lords and other criminals. But the crazy artist I happened to play for the first time. Add to this image an art dealer buying up his paintings, and a muse in the face of a warden who poses for him nude... When we analyzed and rehearsed scenes, Wes advised me to pay attention to artists such as Picasso, Matisse, Francis Bacon, Willem de Kooning, Anselm Kiefer. As for me, I liked the image of Jackson Pollock more. And Sandro Kopp, a German artist and partner of Tilda Swinton, helped me play the role: he not only painted all "my" canvases, but also taught me how to throw myself at them with a knife in a moment of rage.

Your characters often represent the very bottom of society, the criminal world. What in your opinion such a selection of roles is associated with? Are you related to such topics?
I myself do not understand why I keep circling around them all the time. I do not use drugs, I do not live on the border with Mexico, politics never really interested me, although from time to time I watch the news and read newspapers. I stopped drinking alcohol and generally lead a settled lifestyle: I go to bed and get up early... Maybe it's all about the Latin American image? After all, it's automatically associates in the West with drugs, fights and the criminal world in general.

You came to the United States from Puerto Rico as a 13-year-old. How was the adaptation?
By that time, I was already quite familiar with American culture. I enjoyed playing basketball and listening to music, especially the Rolling Stones. Therefore, I quickly made friends and felt very good. In addition, Puerto Ricans from the moment of birth automatically receive US citizenship. True, after the death of my mother, I often felt lonely... As soon as she was gone, my father sent me to a boarding school. My English was weak, but sports, music, and later painting perfectly compensated for the lack of verbal expression. 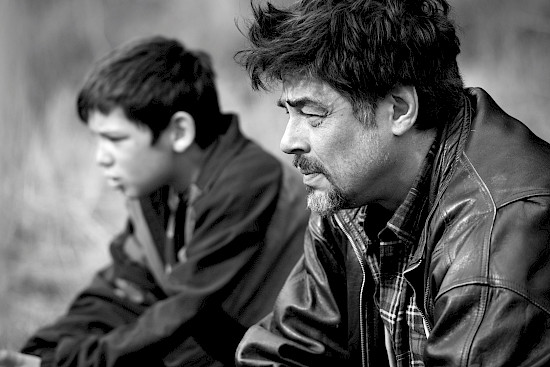 There is an opinion that Latinos are not very welcome in Hollywood...
I also had a hard time when I began to make my way in this industry. On the other hand, I was not the first Latino to conquer Hollywood. I had many predecessors, and on my way often came across people who provided me with help and support. I was lucky enough to play a lot of interesting characters, and not all they were Hispanic. As for origin, I learned early on the rule "Hispanics start from the very bottom". Even today, it is not easy for my compatriots to start an acting career in Hollywood, we still have a long time to fight stereotypes. But the world, even if it often closes, is generally becoming more open and progressive.

Do you think modesty suits an actor? Or does he need a big ego?
I think that having a big ego is not necessary for an actor. Too inflated idea of oneself and stubborn defense of one's own borders are just signs of psychological imbalance. Ego should not be confused with the self-confidence that the actor really needs. Luckily, everything is fine with my confidence. The acting has always been hard, albeit privileged. You can't expect quick success here, although this happens. The actor cannot control his career, because a lot of it depends on the case and other people. In this craft just an appearance and talent are not enough, something else is also necessary - for example, luck. Sometimes success and prestigious awards bring neither permanent work, nor even invitations to the next role. Some actors believe: if you have already played a leading role, then things are good! They're wrong. I had to play five main roles before I was spotted by directors like Steven Soderberg or Oliver Stone.

Why did you want to be an actor?
Acting is all the more wonderful because it gives you the will to your emotions. My father, a lawyer, was against my choice, he thought his son should graduate. A man of profession can be understood. When a student studies law, he can then become a lawyer, if he studies medicine, he’ll be a doctor. And who will be the person who sticks out in the theater all day long and learns acting? A fraud? For many, this path is not too clear. In my youth, I constantly argued with my father because of this, he seemed conservative and limited to me. But since I had a daughter, I have become more aware of my father and his concerns. 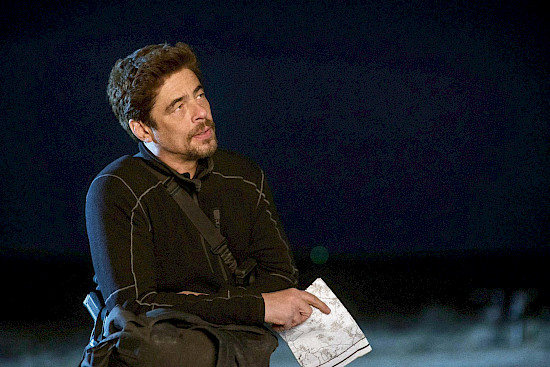 What will bother you most if your daughter follows in your footsteps?
Suffering, unemployment, compromises that she will have to make? An actor's career does not include all this by default, although the chances are higher than in some other professions. Not every director is Steven Soderberg, and it is not always possible to predict whether the film will turn out successful. It used to seem to me that in three dozen years of my career I had already seen everything, that life would no longer surprise me. Over time, I realized that experience does not guarantee a carefree life, often you have to start everything from start, especially in my field. You can't get used to it, but if you love art, if you decide to follow this path - be ready at any time to start all over again. 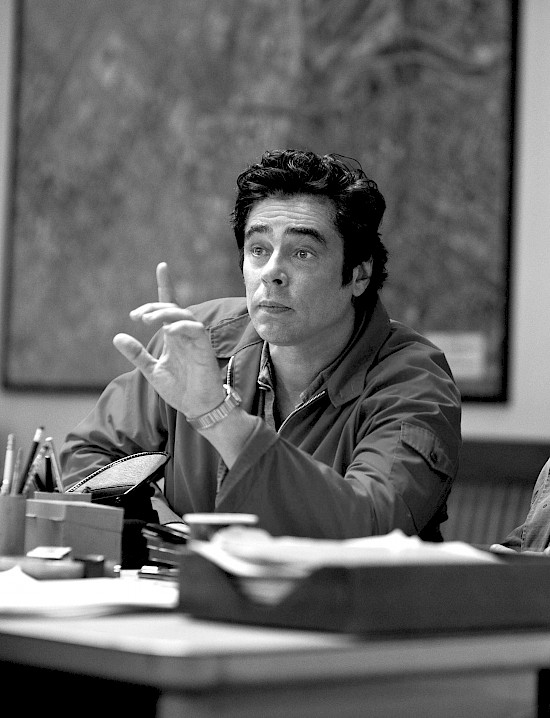 Did the birth of your daughter affect the choice of roles for you?
How to say this... Sometimes I try to choose a project that Delilah would like, so that she wants to see it with me. I justify my dubs in children's films with that. On the other hand, my daughter has her own life, and I have my own. How do I know how her views on life will change when she grows up, what will she prefer later? So, I would not want to give up some roles just because she may not like them.

Are you open to experiments?
Sometimes you agree to the role and it seems that you thought through everything to the smallest detail, but then you see yourself on the screen and you understand that the film did not work out. And it happens that you do not find a common language with the director, the role is annoying, shooting fails, and as a result you just starred in your best movie. Not always a winning role or a well-known director leads to success. I’ll say again: you can't relax in this profession, you need to constantly work hard, change and overcome something in yourself.

Do you like to rewatch your own roles in films?
A bit of a strange question for someone who doesn't like to look in the mirror... I usually watch my films only once. I do not have special equipment to admire myself on the screen at home. Sometimes, when I see my film on TV, I can watch some segment, take pity on something in my acting, and then call my brother and complain. But if I see it once more or not, it won't change anything! My brother always answers the same thing to my complaints: "If you already know everything very well, why did you make only two films? It's time for you to seriously get into directing!" But it is clear to me without his advice, that when the actor acts in front of the camera for too long, at some point he wants to shoot himself. So, I'm thinking of my own project again...