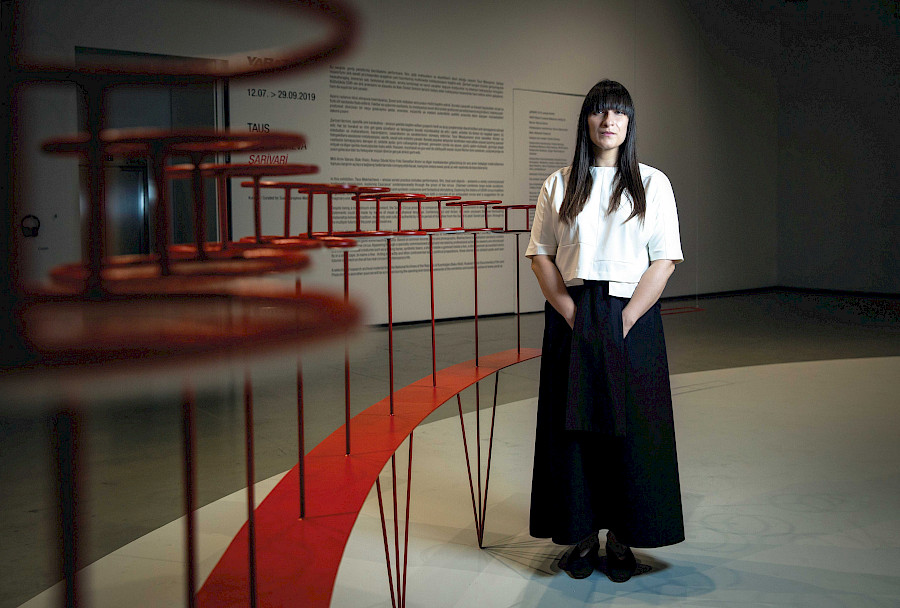 She is a master of the Royal College of Art, a master of performance and a video artist, the granddaughter of the Avar poet Rasul Gamzatov. She has an alter ego, a “friend from Dagestan,” as she calls her, a super Taus who wins awards for Makhacheva, superheroically “trying to tooth” the established system of Caucasian mentality, sometimes balancing on the verge of a foul. Her works are in the collections of major world art centres: the British Tate Modern, the Dutch Muhka, the French Center Pompidou and the Kadist Art Foundation. We talked with Taus about how and where the Sovrisk comes from, what art is involved in and what is more important than talent. 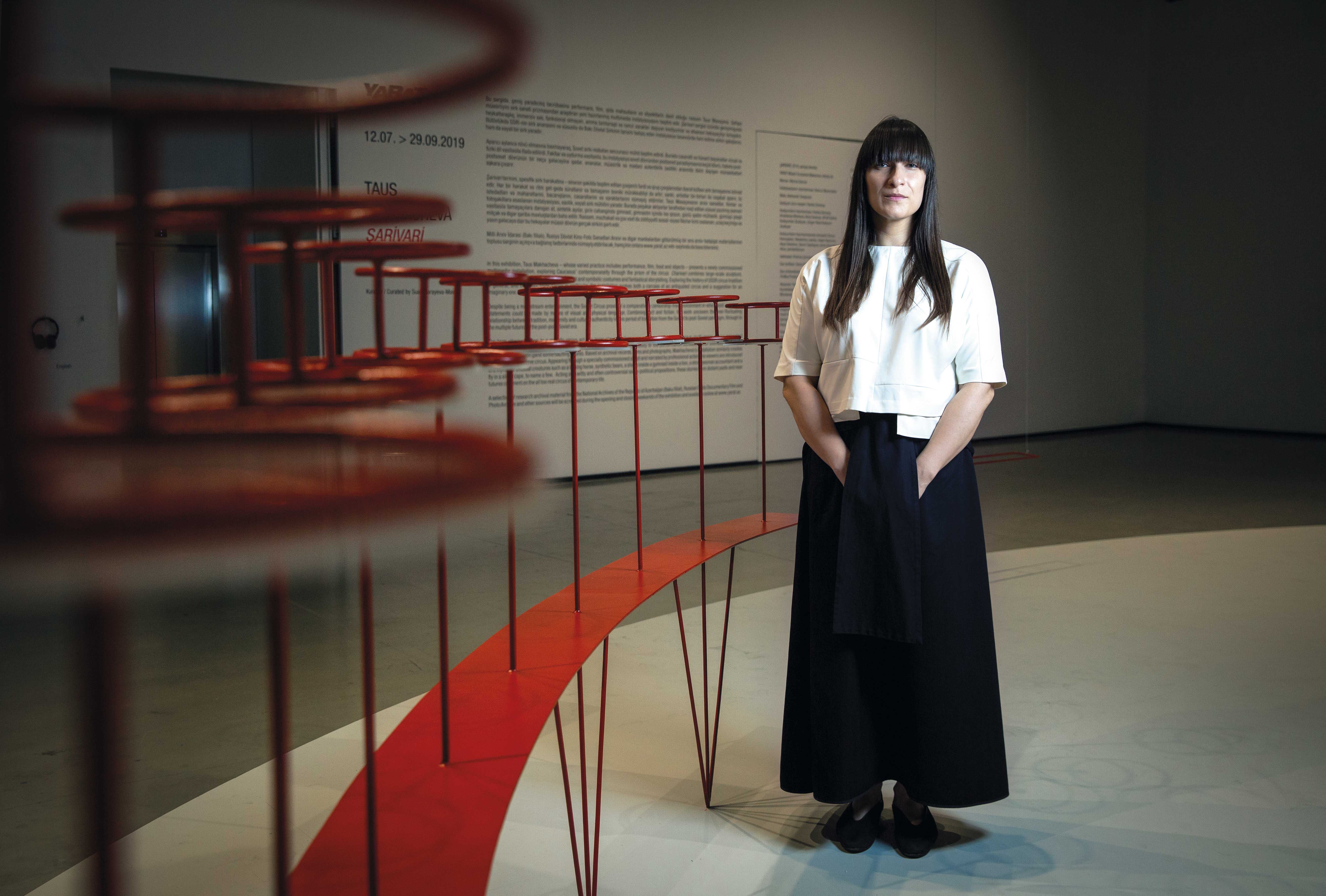 How did the creative path of Taus Makhacheva begin? What was the choice of artistic creation and contemporary art as the main passion in life?

Paradoxically, at first, I graduated from university with a degree in world economics. The fact is that my mother is an art historian and perfectly understands that it’s very difficult to earn money doing art. She wanted me to be a manager at an oil company. But it did not work out, it was not my cup of tea. After university, I entered a preparatory art course in London and asked my mother to let me go into adulthood, so to speak. She, of course, was scared but found the strength in herself to do this. I began my studies with photography, but I quickly realized that this was not enough, and continued to study contemporary art. After graduation, I worked as a photo editor for a year, and then found her way in art. My story is an example of self-realization. In art there is no clear schedule "from nine to five", you build your work. Now everything is more or less adjusted, I have my workshop, in which two of my wonderful assistants work. But all this, of course, did not come immediately. 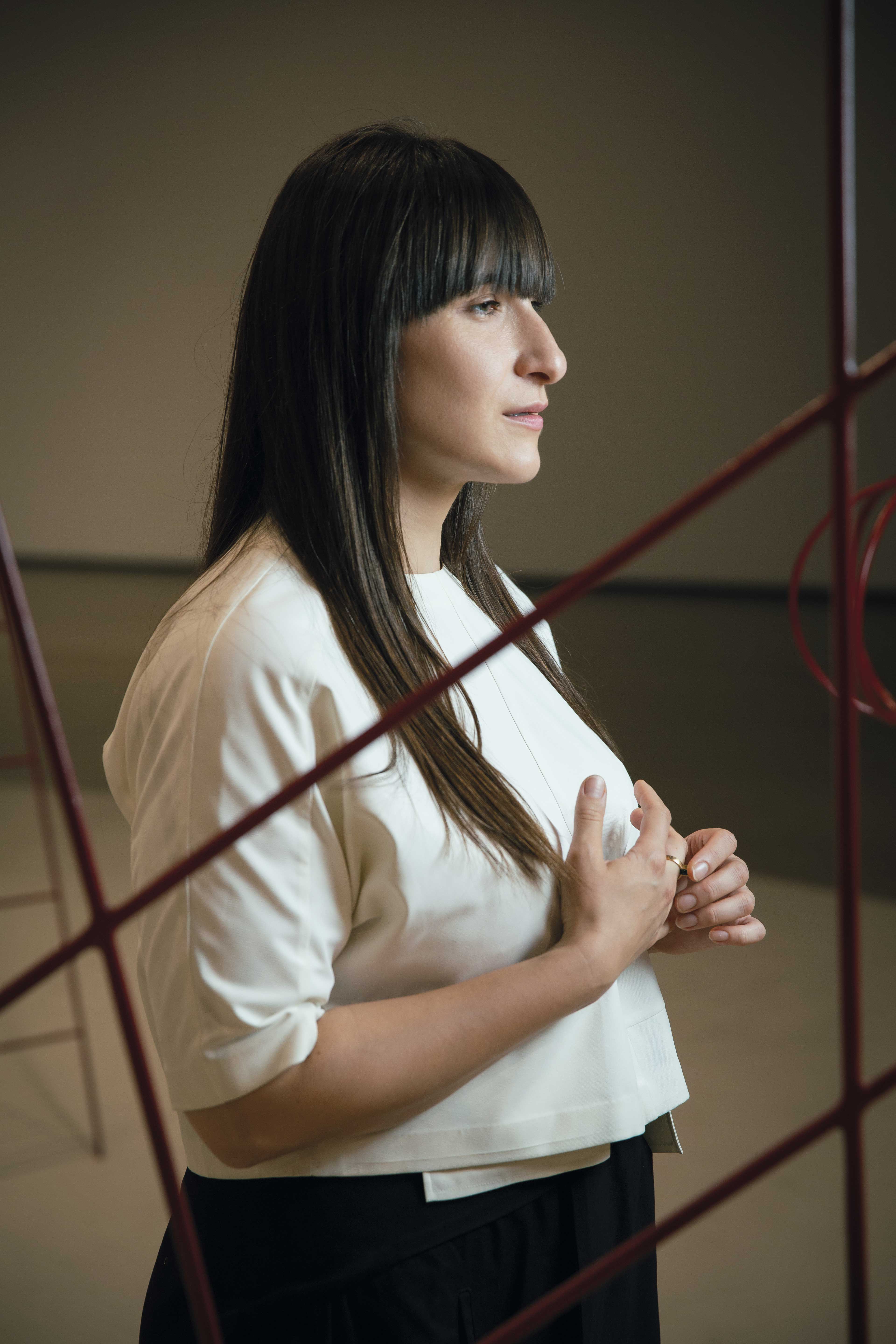 How did you manage to become famous relatively soon in various regions of the world, winning international and regional festivals and competitions in Russia, Britain, Germany, Turkey, etc.?

I would not say that I won so often, I just participated in good exhibitions. And worked a lot. I'm not sure if there is a certain innate talent: it seems to me that the whole thing is perseverance and work, thanks to them, success is achieved. And if the artist has nothing to say, it’s better not to try. This is a very difficult way. It is not a matter of earning, not fame, but what you want to create. Speak not in the text or using posters but images. If I ever get tired of it, I will do something else – I will open a Spa-salon, for example, so that people can enjoy relaxation and beauty.

What is your interest in the topic disclosed in your installation of “Charivari”? And what does the circus mean to you: art, entertainment, childhood memories, something else?

As a child, I loved the circus, even dreamed of becoming a clown. In the circus, unlike other cultural venues, in Soviet times it was possible to joke, there was a kind of freedom of expression. And I like works in which serious questions are raised or serious concerns and fears are discussed. We live in turbulent times. In a sense, a person is always in a state of a one-point or two-point earthquake. Many landmarks have disappeared, but no new ones have appeared, and society is torn between different value systems, not understanding what development is and how to develop further. One must either hold on to his rigid shell and petrified old values or become flexible. In the Caucasus, it seems to me that the concept of flexibility is perceived in two ways. On the one hand, this society is very flexible, but on the other, it is afraid of certain types of flexibility, afraid that they can destroy its identity, which is petrified. 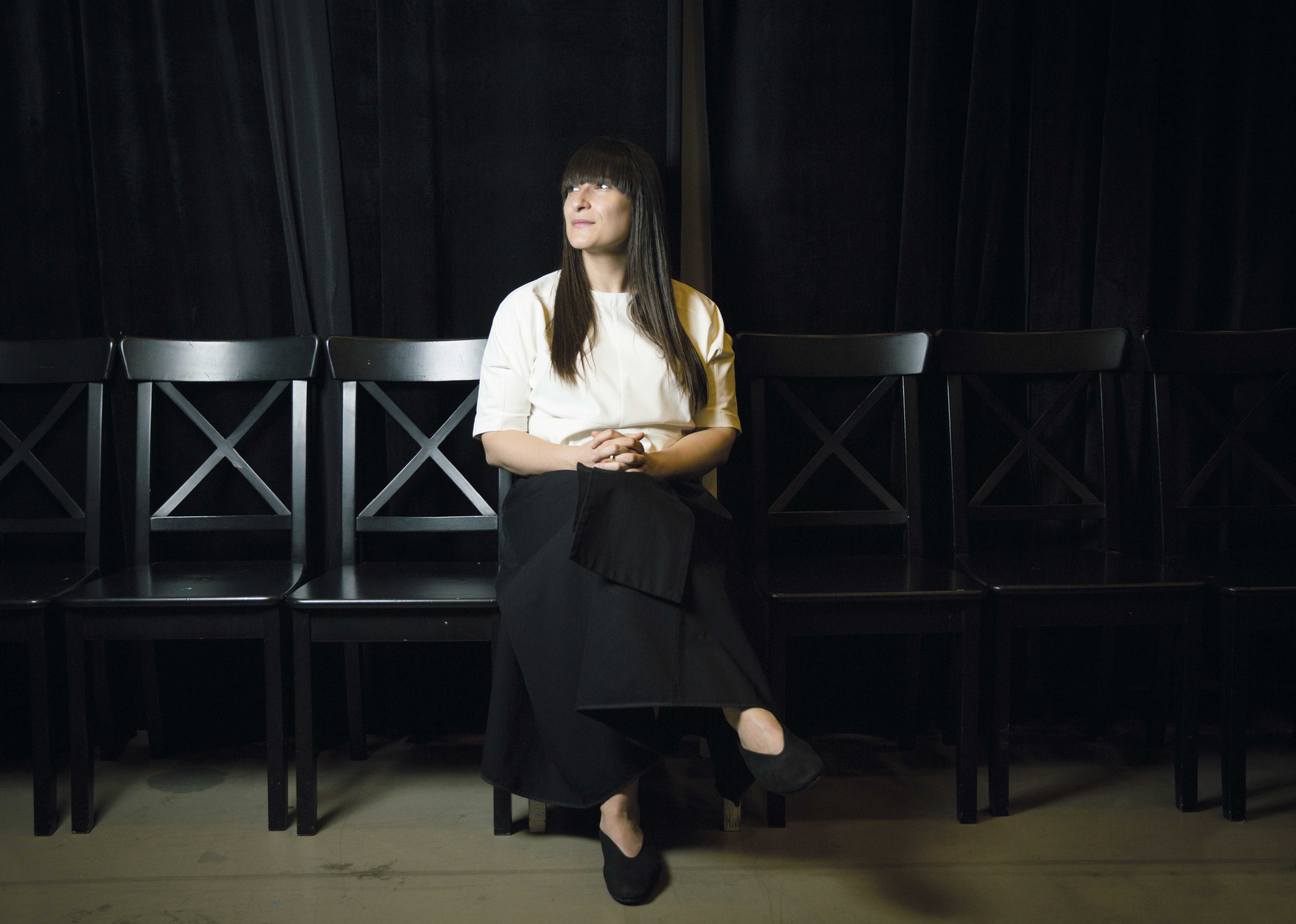 Is this fear of flexibility related to the interaction of eastern and western mentality?

I do not know. And I don’t think at all that it is possible to divide the mentality into eastern and western. When I talk about flexibility, I mean the path that each person takes in his development, independently or with the help of a psychoanalyst. It seems to me that dividing values into Western and Eastern and determining that progress is – it is a business of the last century, which is also extremely dangerous.

Yes, it can cause a clash of civilizations...

Anyway, the “civilizational” approach seems to be a kind of relic of the past.

How do you find topics for your work? What inspires you: nature, people, the pace of life, emotions, life experience?

Society is the first to inspire. For example, while working for the Liverpool Biennale, I met with a restorer in Moscow, and she told me that the best material for the restoration of paintings is... human saliva. It has something to do with alkaline balance... She restored the icon in the Tretyakov Gallery with her saliva and was very happy that her DNA was imprinted in this icon for many years, maybe even forever. In my understanding, this is micro-revolution! This is an amazing knowledge that is contained in a particular profession. Therefore, I try to talk with people from various professions. And here, in Baku, I heard different stories. Naturally, I went to Gobustan, looked at the mud volcanoes. They told me the story of the Berberovs, and I thought about the topic of living animals and people together. I became interested in the circus theme by watching a 1967 documentary in which the works of national circuses were shown, including the Azerbaijani gymnasts Tamila and Rufat Nazirov, the clown Akram Yusupov from Uzbekistan and others. All this was a Soviet circus, but with local traditions. This inspired me. Art practices are incredibly different, but they still have common ground. One of the common points is testing the boundaries of society, testing confrontation, which is characteristic of my practice. If we talk about the installation in YARAT in more detail, we can note the petrified, unusable costumes, a drawing in a space that cannot be stepped on – these are all metaphorical images, something real and at the same time bearing an element of the imaginary. For me, the main component of the work is the audio installation. It lasts a little more than half an hour and consists of ten short stories written by a fantastic writer Alexander Snegirev. A circus of virtual reality is described there: a talking horse, other stories that metaphorically, figuratively describe our life, its various aspects – for example, family, culinary habits, attitude to nature and animals. This is a bit like Borges, a kind of magical realism, sparkling in places with satire and irony. The basis of the artist’s work is life around him, his travels, thoughts, perception of reality. 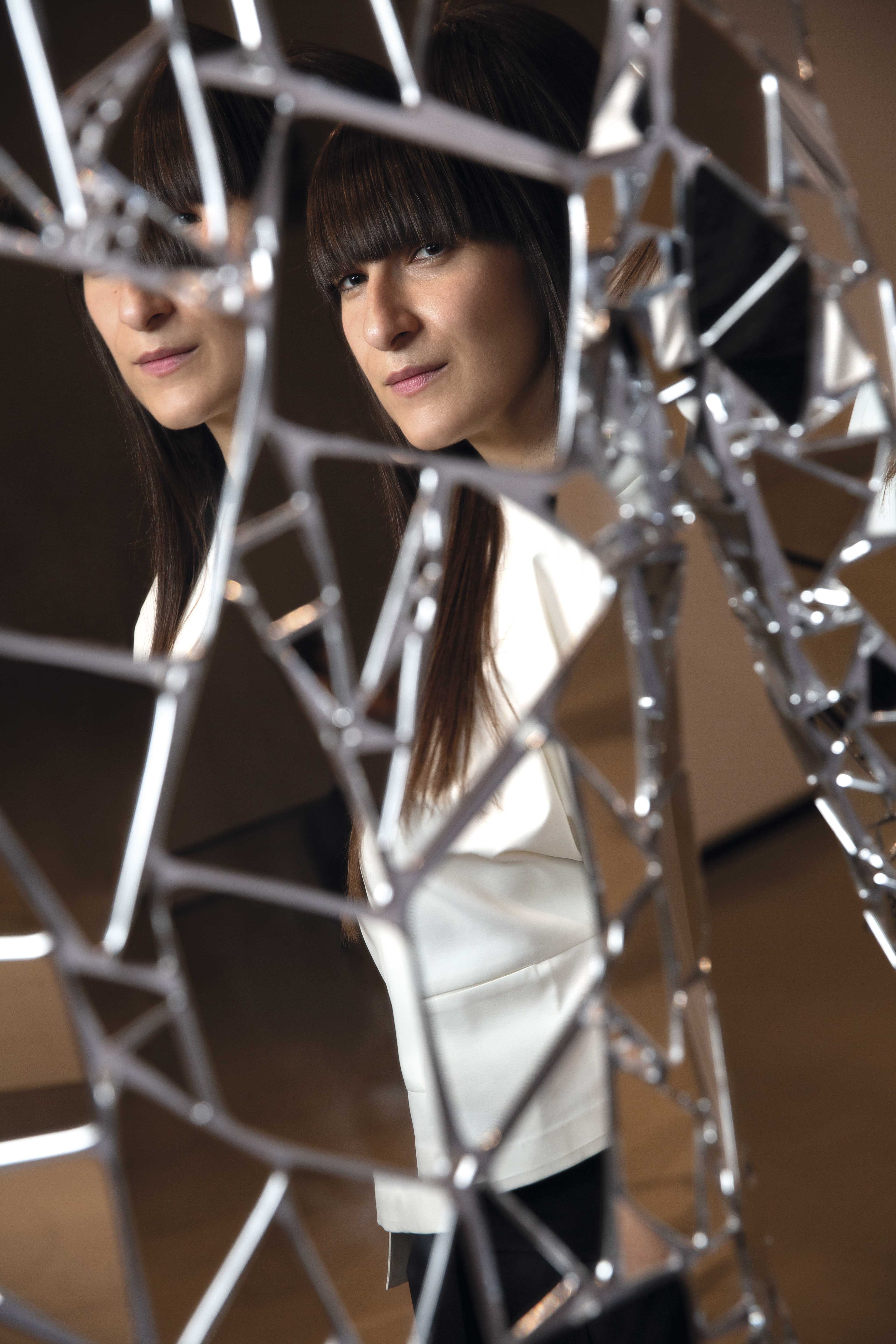 What do you think is the future of contemporary art? And what is the role of new technologies in its development?

First of all, it is a virtual reality. One video game designer once told me that now many games provide the player with unlimited opportunities for creativity: he can modify the game, becoming its full co-author. This is just amazing! There are artists who work with smells – this is also a kind of technology. But the main, decisive factor remains the personality of the artist, his vision of the world. The existence of such people is important – they give a new look at things, new ideas.

Which of your works are especially close and loved for you?

My work is something that I cannot help but do. Otherwise, I would become some kind of mid-level manager or run my own business. But I want to create new meanings, to be a catalyst for new ideas, to bring people together to create. In the project that I present today, I have large collaborators – Alexander Snegirev, Maria Serova. After all, art can express a variety of ideas. For example, hearing a story about how a museum had to move to a new building in a week, you understand how difficult it was physically. Of course, you can protest, resent. And you can make an allegory – how a tightrope walker transfers huge paintings from one mountain to another. And viewers will understand that we are talking about the vulnerable state of museums and the vulnerability of the artists themselves. I am sure every artist asks the question: does what he does make sense, will it remain in the future? As for my work, I can’t single out any of my favourites. I love the work of other authors. 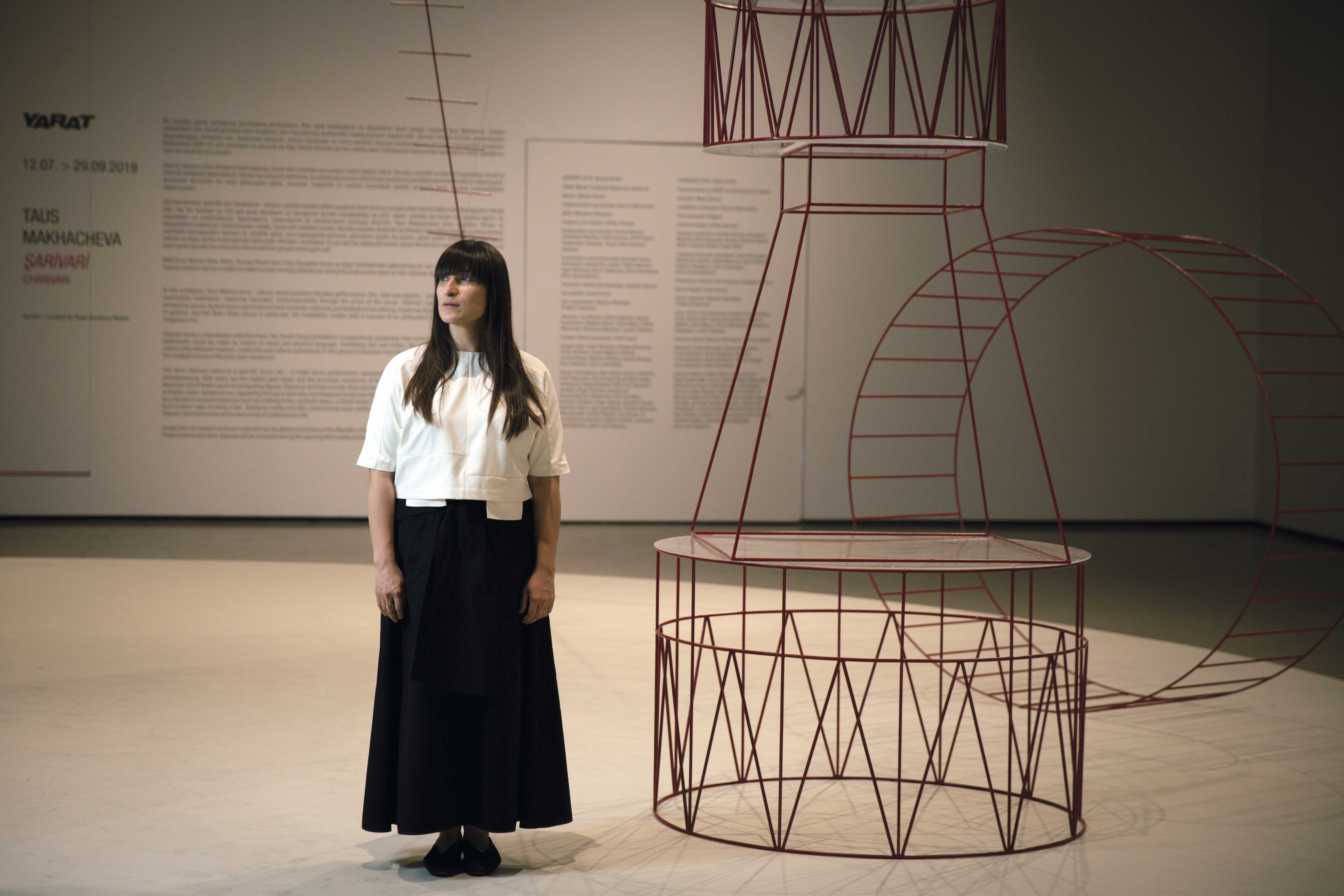 Who, for example, could you name?

For example, Yasmin Chibich, Sen Kim, who makes very interesting drawings: having a hearing limit, she creates amazing stories about her reality, which uses a different type of communication.

What can you say about the development of contemporary art in Azerbaijan? What directions, what names are you interested in?

I like the work of Farhad Farzaliev. Orkhan Huseynov makes subtle, interesting video works. It seems to me that a galaxy of new artists is appearing in Azerbaijan, and there are more and more of them. Many of them collaborate with YARAT. Besides, world-famous artists and designers come and do their work here in Baku. In particular, thanks to this communication, a new creative and artistic environment is growing and developing in our country.

What do you expect from the future?

I do not expect anything from the future, I plan. I have outlined projects for the next three years. Nothing grandiose, I do not plan to write a doctorate. I don’t like working with text at all, for me it is somewhere even a traumatic experience ... I plan to do new work, I want to experiment. After the Venice Biennale, I had an amazing transitional period. At first, I thought that this would be the pinnacle of my work, but the festival was over, and there was no peak feeling. And I realized that for my art practice is more important, it is important to do what I want. And also - not to be afraid of anything, just try new things and move forward. Today it has become a determining criterion in my work.

The material was published in the 67th issue.

Thanks to the YARAT Contemporary Art Space for helping us organize interviews and filming.