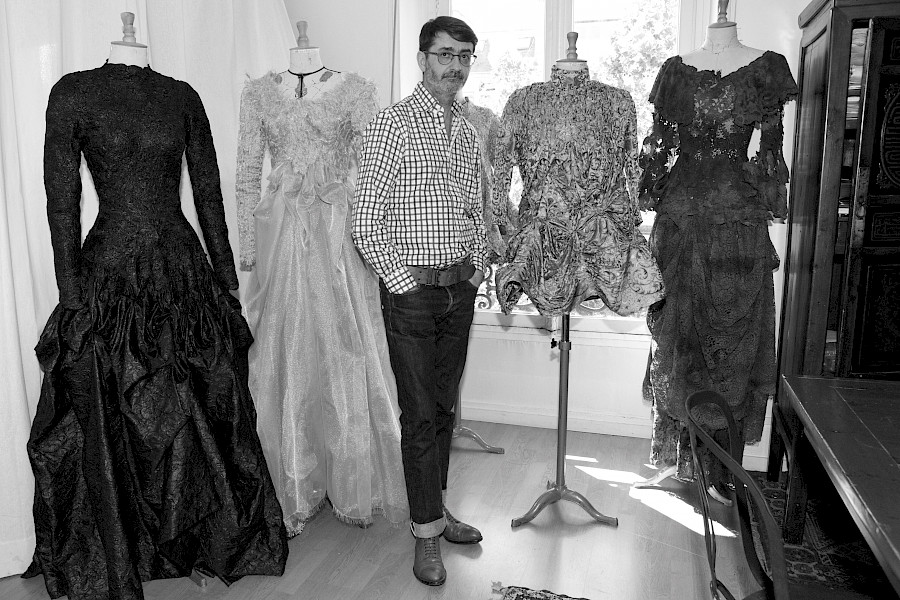 His motto is extravagance and risk. He is equally inspired by the modest poetry of simple Parisian streets and the magnificent decoration of famous theatres. Such a paradoxical mixture creates couture that is unlike any other. His name is Frank Sorbier. A dreamer with overstated demands on himself, Frank Sorbier holds a special place in the couture world. Following the example of the skilled craftsmen with whom he works, he considers himself a designer-technician. 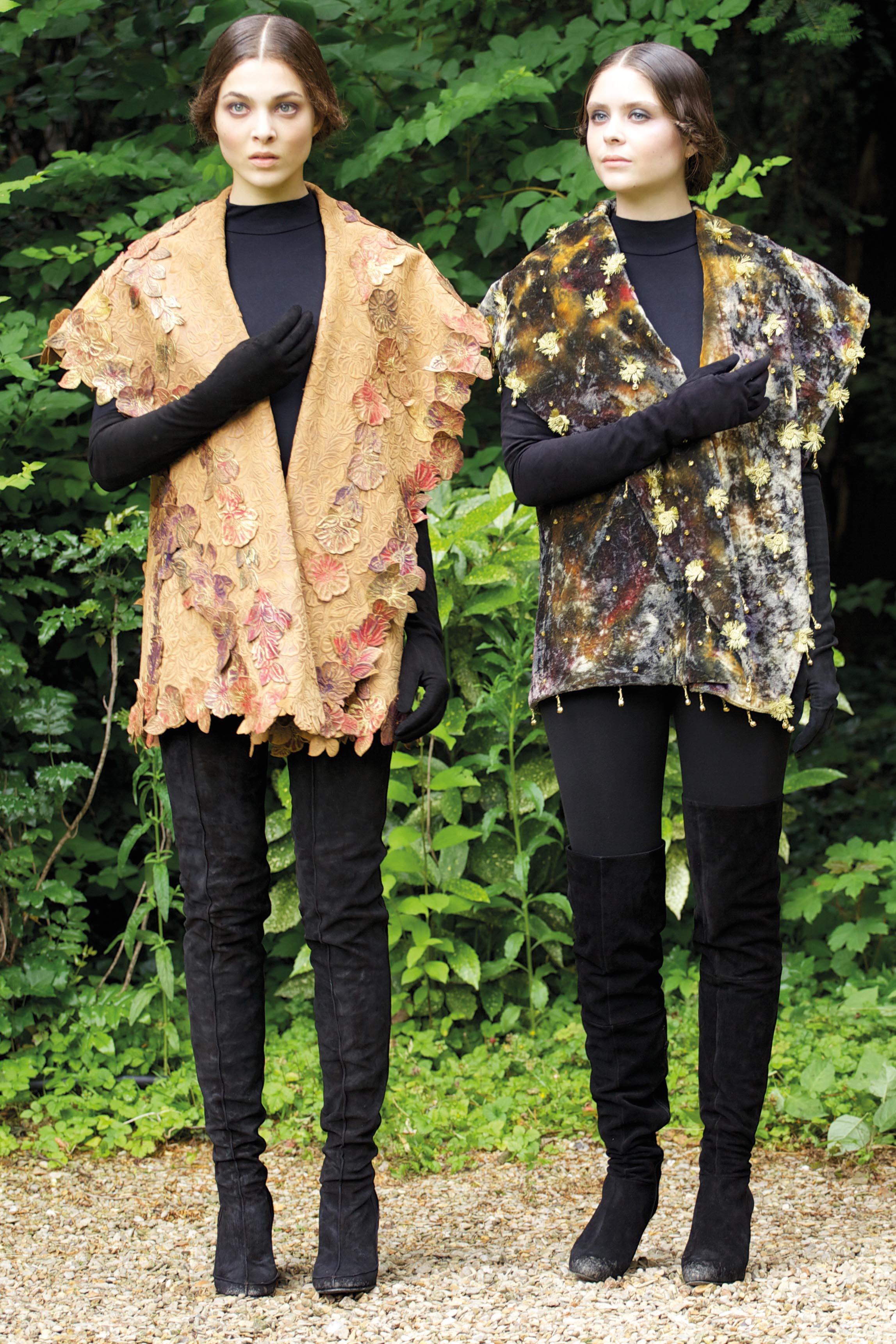 Studio maestro Sorbier in Paris - the quintessence of talent, skill and rigour. In the words of Sorbier, couture - a whole culture, one might even say, a cult whose service he dedicated his life.

Together with Isabel Tartier, his companion and right hand, Sorbier is a talented tandem. They work out each silhouette of the dress - from the first stroke in the sketch to the last seam, making the clothes a work of art.

Frank Sorbier's reckoning to the host of haute couture's elects happened at lightning speed, despite the fact that the world of elite fashion is closed and is known for its exactingness.

In 1999, the collection presented by them created a furore, permanently securing the status of a great fashion designer for Sorbier.

In 2005, Sorbier enthusiastically accepted an offer to work on the creation of theatrical costumes for the opera La Traviata, set for an open-air festival.

In 2008, he continued this collaboration, taking up the design of costumes for the production of "Hoffmann's Tales". 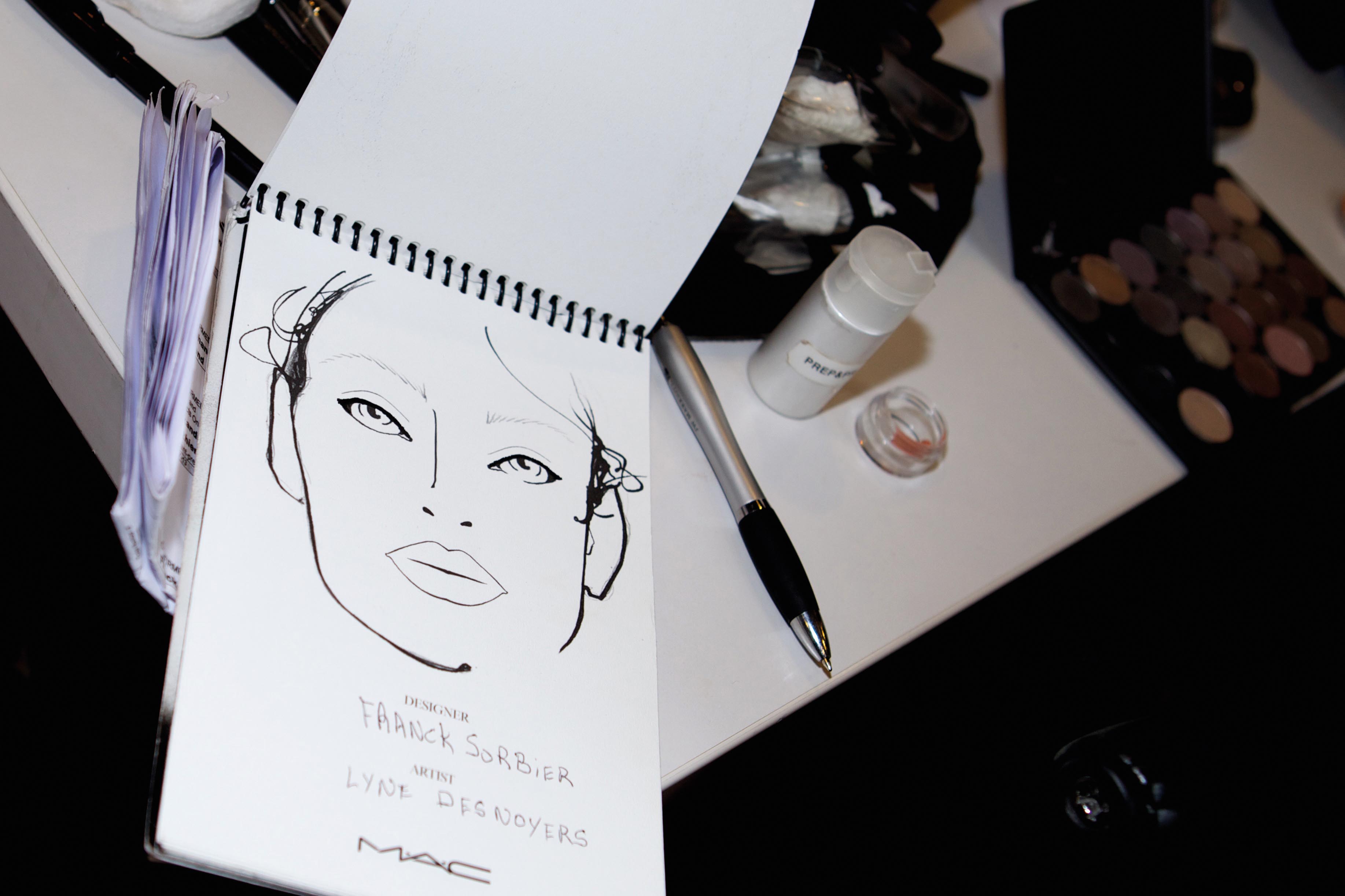 Frank Sorbier skillfully combines sophisticated elegance with bold solutions and innovations. So, during the fall-winter 2013/14 show, the audience was presented with a kind of art collection - 14 outfits in one. In this way, the couturier illustrated in 3D the "The Donkey Skin" fairy tale of the 17th-century writer Charles Perrot. It was an unexpected, provocative, stunning, but certainly a skilful mix of fashion, literature and high technology.

And at the last Paris Fashion Week, his collection was presented as a forest walk, performed by a company of medieval beauties from the upper class. While walking, the girls kept their hands on their chests, like on Italian canvases of the Renaissance period, which immersed the viewer even more into the atmosphere of a past era. Today Sorbier is one of the main figures of not only French but also world fashion. Couturier became famous for his ability to transform fabrics. Owning technology known only to him, he cleverly uses a chic texture in a noble couture design.

Fashion weeks, between which not so long intervals, turned into a kind of "marathon" for designers, chasing elusive changeable trends. Tell us more about your collection, presented at the last Fashion Week.

It is a tribute to the fashion of 20-30 years ago when for the creation of dresses, rich heavy fabrics were used. The generation of the 80–90s was different. Then there was more money and, of course, women preferred to dress in exclusive luxury dresses. Now in France, they do not like the rich, and for high fashion, we have some difficult times. The latest collection is absolutely classic, but at the same time modern. My main idea was to create holiday outfits.
However, couture clothes are always festive. 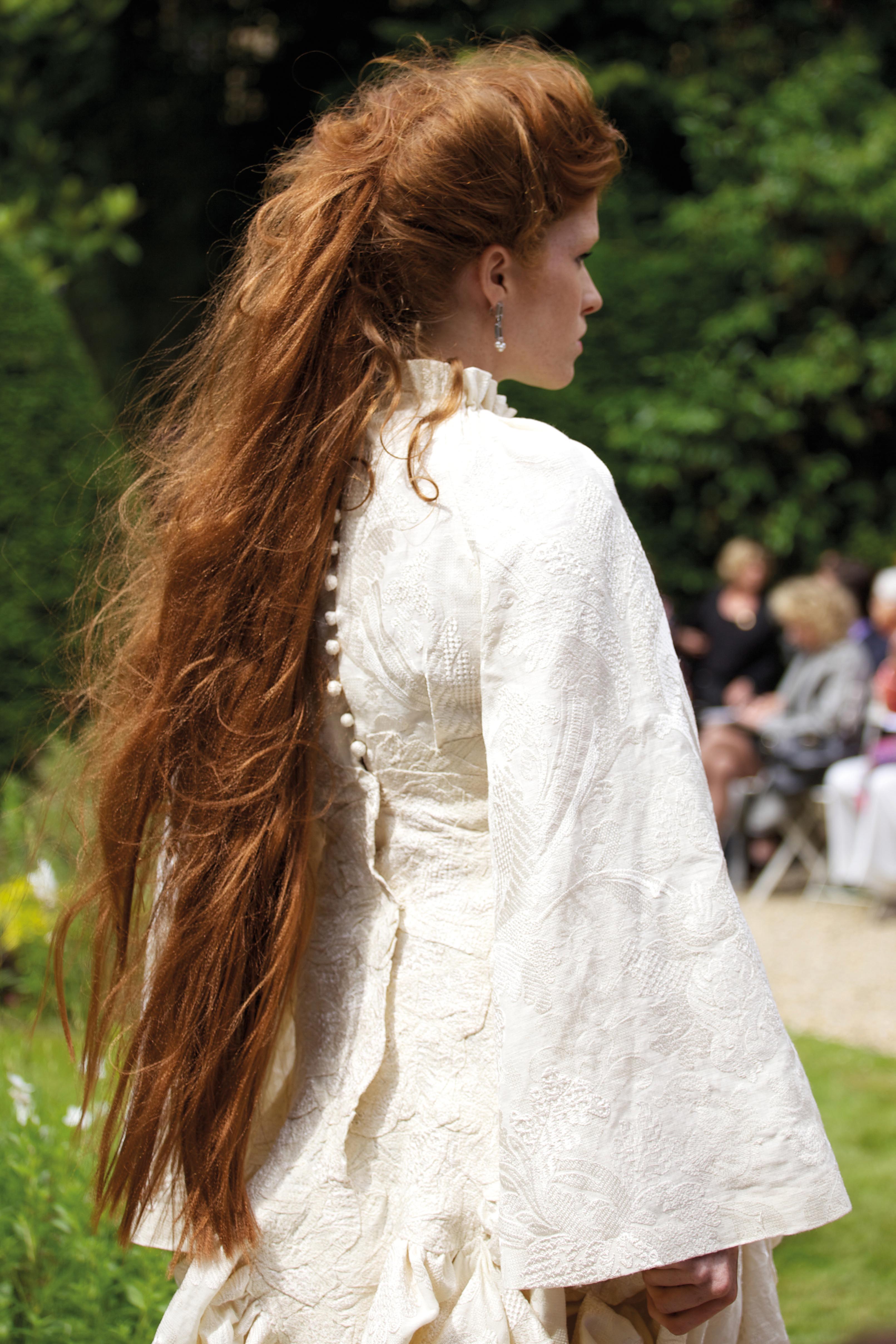 Your shows are always unexpected, amazing and contain a surprise. In one of the defiles, you represented the collection as a play on the theatre stage, and this time the models walked through the luxurious garden in the drizzling rain. Are risk and originality an integral part of the heritage of the House of Sorbier?

Apparently, yes. For the fourth time, we show under the open sky.
The weather was overcast, but since winter collections are presented in July, this did not bother us. Once we chose the gardens of the Cartier Foundation, where models stood in boxes like pupae, and the public made a defile to look at them. In my opinion, natural daylight gives reality, sensuality and special value to haute couture things.

I have never liked the catwalk defile, during which models flash like sports standards. Previously, the high fashion images differed from the pret-a-porter models: the girls knew the value of the thing they were wearing, and their goal was not only to show but also to give the outfit more advantageous, to “sell” it. I do not like the current general trend when almost teenagers dress up in expensive dresses, which took enormous time to make. But such young models cannot adequately present the work of couturier.

My every show is a mini-performance. I am inspired by Mugler and Montana, for whom the word "celebration" has always been synonymous with "defile". My ideas very often depend on the technical possibilities, first of all, on the place of conduction. Then we develop the concept with Isabel.

You often refer to the past.
Would you like to live in a different era?

Rather, I would love to travel to other times.
For example, in the era of the XIX century. Then elegant women wore dresses with crinolines, but the industry was already beginning to develop. It was a time of paradoxes: humanity has already entered into modernity, but the cultural and historical heritage has not yet been lost. That is why I really like the style of the era of the famous Charlotte Bronte novel "Jane Eyre". 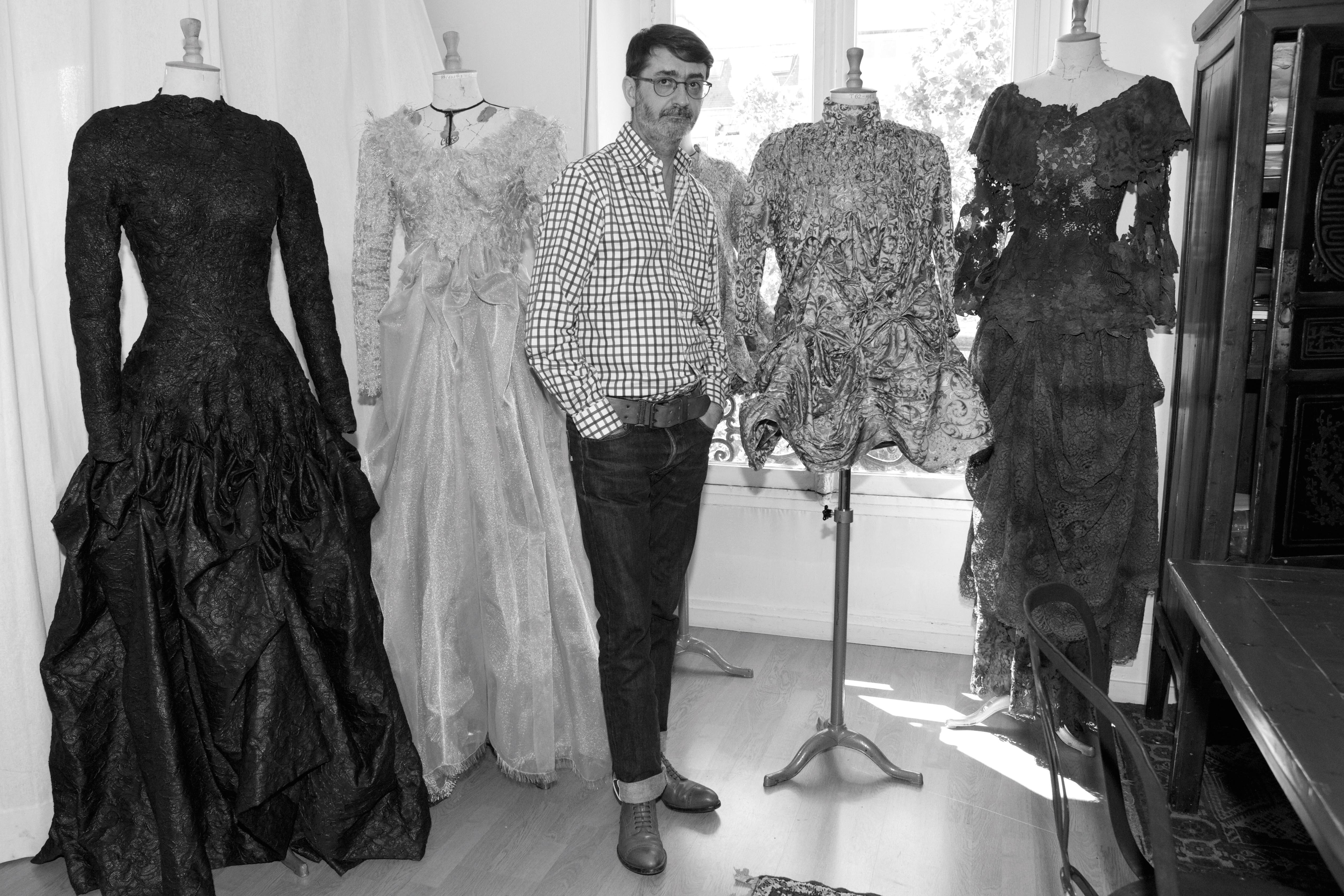 You skillfully combine innovation and tradition, as in your 3D catwalk. Modern technology helps you in the work of creating collections?

It was interesting for me to try to embody this idea, but personally, I consider myself a “prehistoric man”. I am fluent in a sewing machine, but far from computers. In my opinion, not one, even the most perfect, the machine can reproduce the accuracy and subtlety of the work done by the human hand. But in the near future, combining manual work and new technologies, for sure, it will be possible to achieve a result that is different from what we have today.

You are radical in your traditional approach. This is hand embroidery, hand-painted fabrics ...

This is the main idea of high fashion. My suppliers are craftsmen who create fabrics of the highest quality, as well as shoes with special designs and original accessories. This season I used materials that are used for interior decoration, although earlier they were also used for sewing couture collections. Large-scale jacquard fabric is saturated with prints, and lace creates the illusion of embroidery.

It would be interesting to know the details of your work on theatrical costumes.

Henri-Jean Serva, director of the opera La Traviata, was present at the presentation of one of my collections, which was dedicated to cinema. And it was he who offered me a creative collaboration in the creation of costumes. I have often been told that my collections are theatrical, so I agreed without hesitation.
I love the plot "Traviata" and got a real pleasure, creating magnificent and gorgeous stage dresses. It was a magical experience that allowed me to get in touch with the theatre world.
Then there was an unforgettable period of creating stage costumes for such world-famous pop stars as Mylene Farmer and Johnny Holliday. It was high fashion that gave me the opportunity to meet people whom I would never see working in prêt-à-porter. 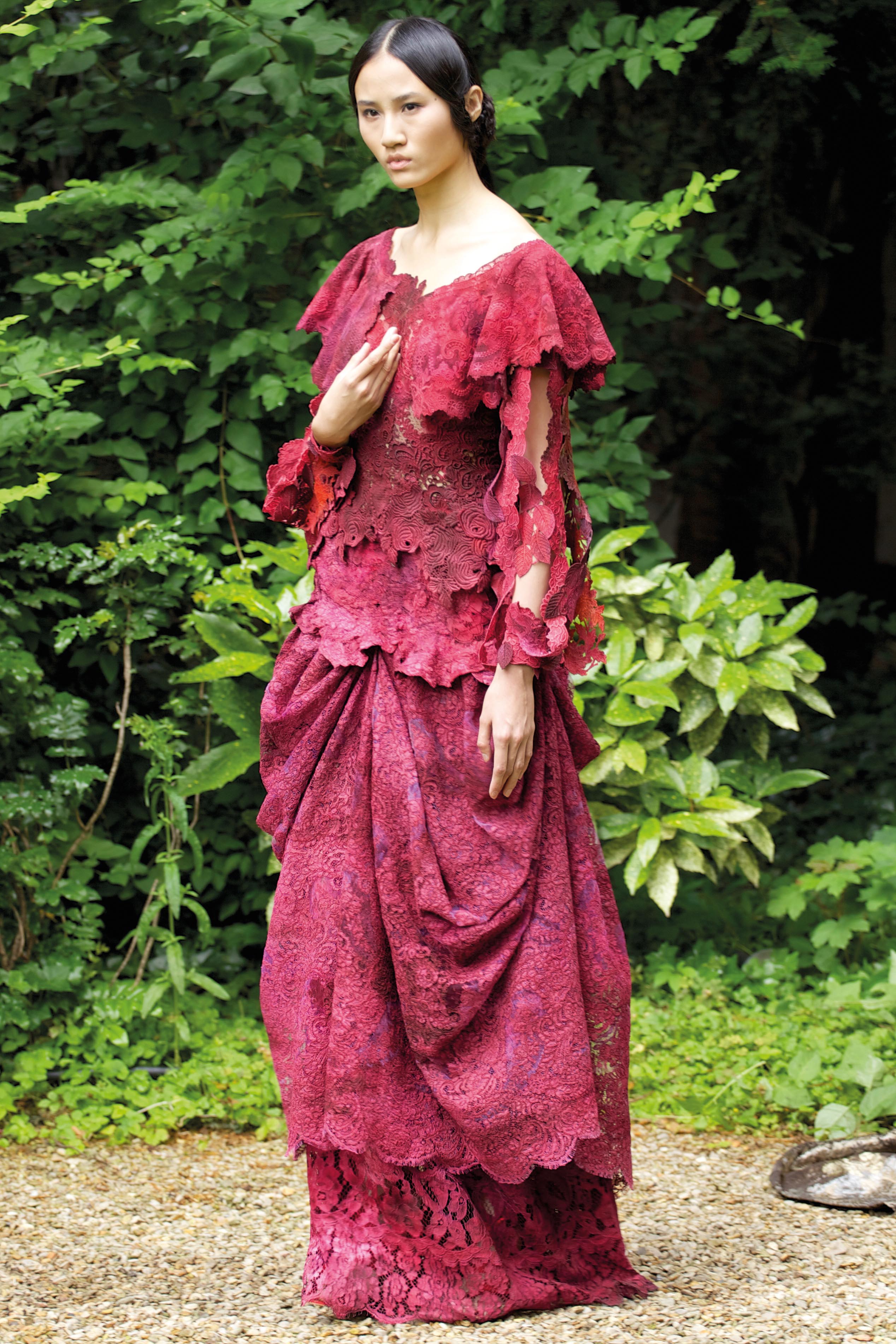 What about your choice of music? On what do you base, selecting music for the shows?

For me, music is an integral part of the defile. It sets the tone for the chosen epoch and the mood of the show, immerses the public in the atmosphere I have planned. I often start working on a collection with music that inspires me.
But modern music, unfortunately, is flat. Therefore, for the last “medieval” show, we chose a composition from ancient archives, and then Brother Isabel made an original treatment for us.
The main idea was to find the music of the Renaissance, but with the potential to profitably present it in a modern context. Saving in the melody of mystery and at the same time, solemnity and festivity became our goal.

At the end of the conversation, I want to ask you to give some advice to modern women.

The main thing is to be in harmony with yourself,  combine things skillfully. Try to emphasize your individuality with a thoughtful style. Do not pursue fashion, it is fleeting. Wear what suits you. After all, clothing is something we can hide the flaws with and emphasize the dignity. In the era of mini-skirts, these same skirts were worn by everyone, but not all of them look good (laughs). And another tip: less plastic surgery. Female body is so beautiful. It is female beauty that inspires me to create new collections. 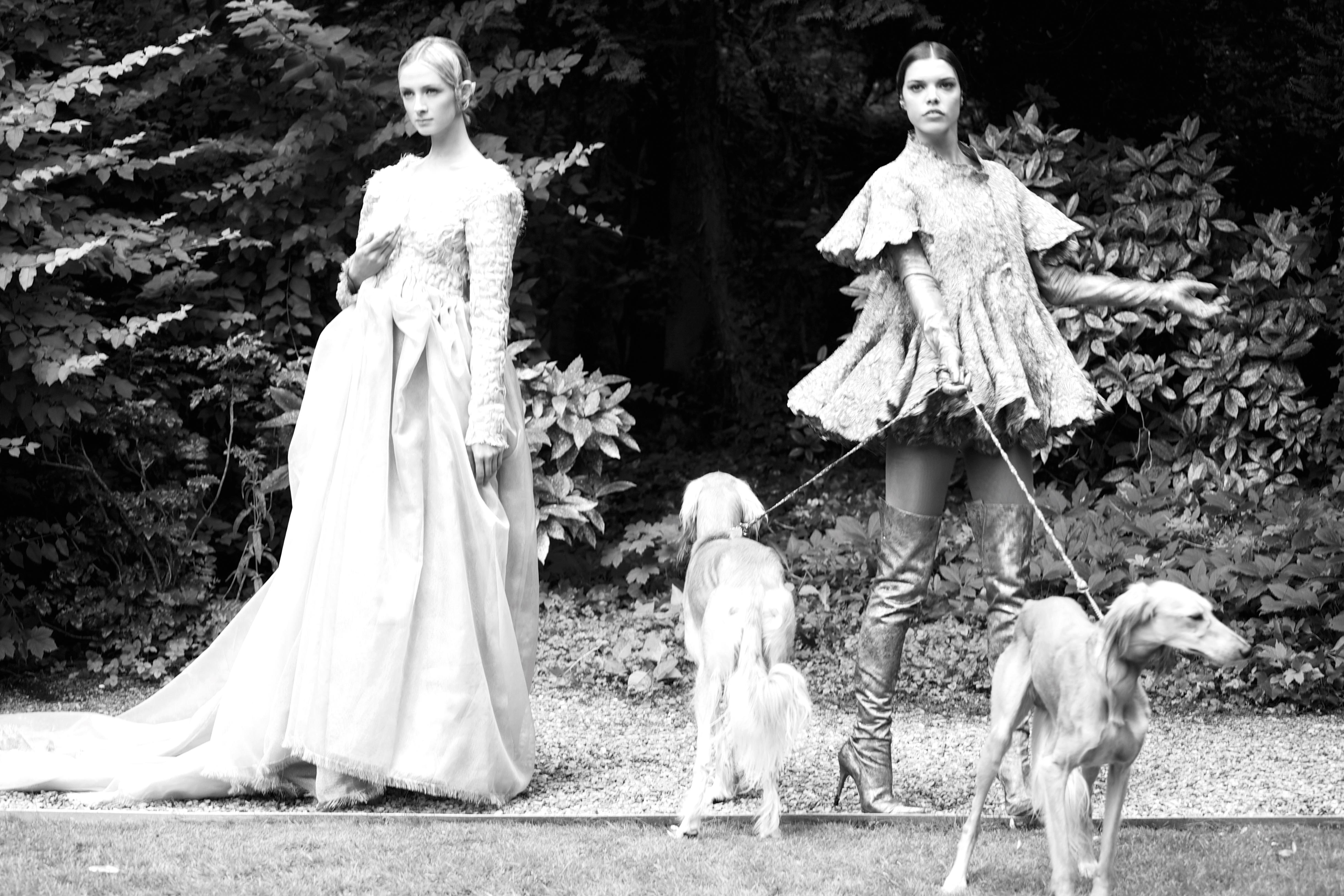 INTERVIEW AND PHOTO by Olesya Okuneva

The interview was published in the fourth issue