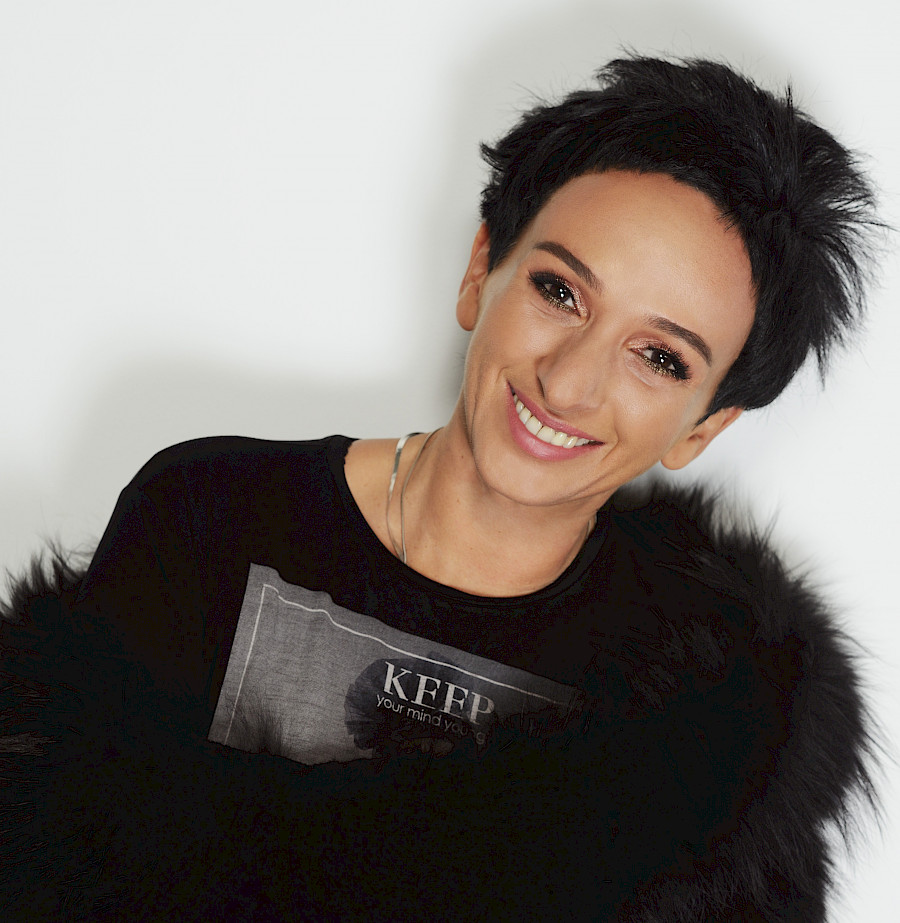 Moscow. Workshop at the Winery. Again, this magical wasteland, the workshop for the production of creativity... For the second time, I was brought here in pursuit of an extraordinary hero. Last time it was a meeting with theatre reformer Kirill Serebrennikov. This time the purpose of my journalistic pilgrimage is she, the "rebel Salakhova" who fell from the moon. And here she is. Aidan, who does not have silence, lives and creates, accompanied by background music, in free flight, obeying only the rhythm of her heartbeat. And now, having picked up this rhythm, I am sitting in the middle of a living “machine of desires” – between two Aidan, a photographer and an artist, feverishly thinking about the most cherished... almond coffee ordered in a cafe nearby. 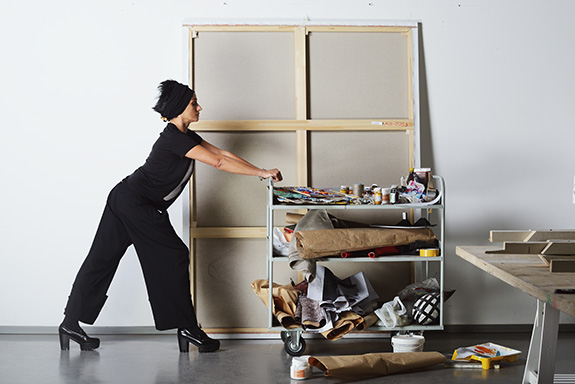 Aidan, on the way here I tried to imagine what kind of person you really are: complicated or simple? People talk about you differently, and for some reason, many perceive you as a complex person…

I have such an unusual hairstyle, a long nose... I do not know the answer, I am surprised myself.

Was your name prophetic to you? Aidan is like "fell off the moon"...

Well, everyone thinks I'm an alien. Even my son.

In your work, you touch on a variety of topics, even religion. What is the most significant topic for you?

The religious theme is not really the main thing for me. I am more concerned about the topic of women in all manifestations, even in religion. For example, the veil... In my opinion, when you put it on, you close yourself from social attitudes and then the conversation with yourself goes more honestly. A woman, in contrast to a man other than the inner self, also has a second vision, which allows her to observe how she looks, moves, acts, moreover, it happens from the point of view of a man. The woman puts herself in the shoes of a man and watches herself. This is, of course, a schizophrenic situation. 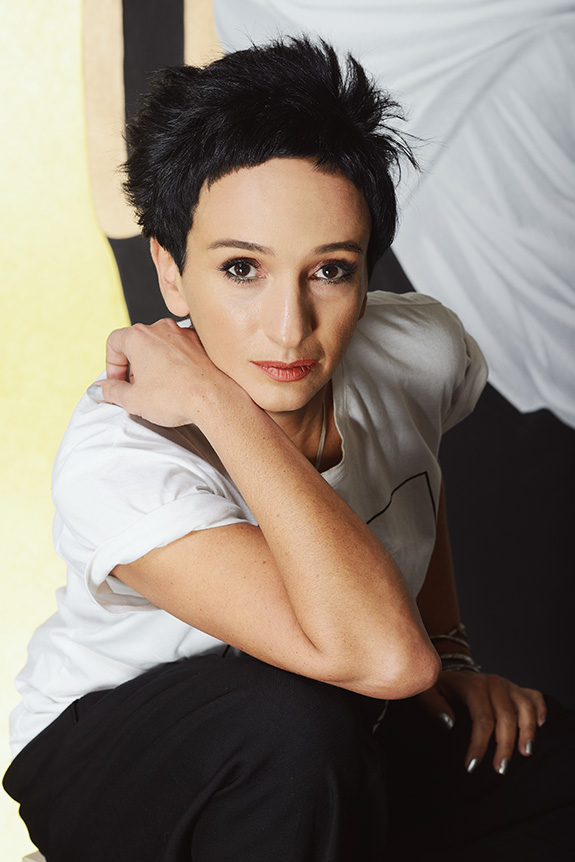 At all times in art, in which mostly men were engaged, a woman often appeared naked as an object of desire. And this is understandable. In my works, in my turn, I expose men as an object of desire, and this, I think, is also explainable... My art is for women. Although it should be noted that the human body, be it female or male, is very beautiful.

Probably, it seems to them that this is better and more convenient.

And what's best for you?

Clothing is such a theater. Where you dress according to the script and sometimes according to your mood. In Dubai, I went to the burqa, and mini. When I am in Carrara, I’m never dressed at all – in the sense that I only wear working clothes: it gives you maximum pleasure – you don’t need to either wear or brush your hair... But in general, I love sweatshirts.

Today, what we call contemporary art is often associated with outrageous...

Some artists thus express their own, honest. ideas and thoughts. Some mediocrity is sometimes shockingly pushy, having no reason for it. Rely on the ignorance of the audience. You just need to understand modern art to distinguish what is good and what is bad. 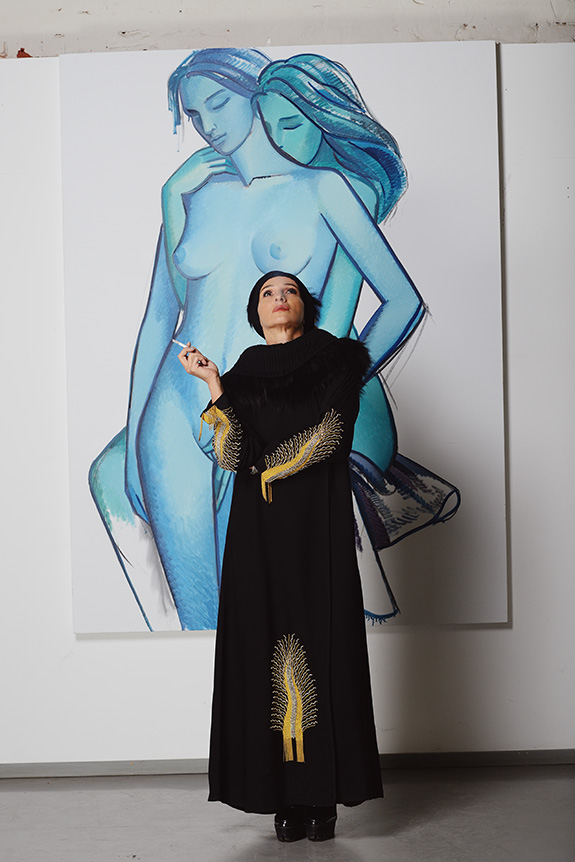 How do you feel about modern theater art?

I don`t like theater and do not go. Categorically.

What do you love?

Going to the movies, dancing and having fun in nightclubs.

You rarely meet a person who lives the way he wants, without fencing himself. For me, and for many others, you are one of such rare people. How do you do it?

The answer is very simple: I just do what I want.

Sometimes it is quite difficult to act “according to one’s will”...

You know, when the age is right, you just start to save time.

Is that why you closed your gallery?

Yes. I did not want the rest of my life engaged in gallery activities. It became gentler, more economical to treat personal time. For example, the assistant sets up a schedule, and when he reports that there must be one meeting or another, I immediately ask myself: do I want to spend part of my life on this meeting? It is convenient or inconvenient in front of people, what will be the reaction – on this I no longer bother.

Apparently, you manage to be in harmony with the world and yourself... Under what circumstances does this occur?

When everything is just awesome! I had to go through a lot. Such a long way – from social, parental, political attattitudes. People spend too much time worrying about what they think about them, do not do what they want, but as is customary. And in the end it turns out that they did not live their lives. Although it is too late, but I realized that happiness is a harmonious state in which you do not contradict yourself! You can not contradict yourself, never! Especially women! After all, our women in general live incomprehensibly whose life: maybe they don’t need to get married – and they go, maybe one child isn’t needed – and they give birth to ten children... We must clearly understand our desires. True, this is not given to everyone... 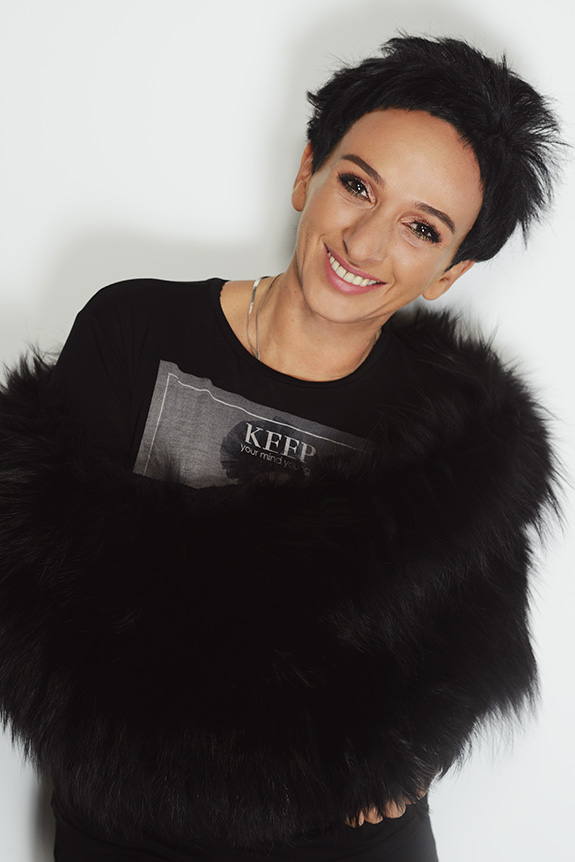 How did you react to your son's early marriage? After all, he is only 21 years old.

Very good, because he and his spouse Anechka have very correct views on life. This is the couple that understands a lot, and they will not choke each other with their relationships.

Why is it so difficult to be in a relationship today?

Well, I can only say about myself. It's hard for me to be in a relationship because I'm a creative person, an artist. Experience shows that under no circumstances will any man want to be in second place. And for me, in the first place is always Art.

And what about love? Or you do not recognize her primacy?

I used to think that love is the mortification of one’s own Self. I even have such a work – “Love and Death”. Today, for me, there is unconditional love: these are calm, even feelings, not passion and not cataclysms... With age, you learn to love so as not to contradict yourself.

And your love of art? What is more in it: feelings or passion? 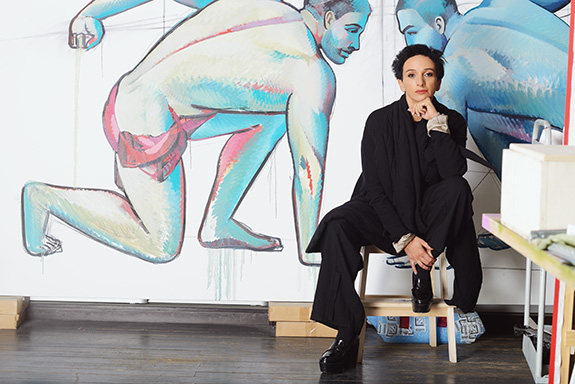 In your works you always focus on the hands. I would even say that the hands are the “main characters” of your work...

Hands never lie, a gesture can tell a lot about a person. You can deceive with your eyes, but not with your hands... I was very hooked on that tragic incident when terrorists hijacked the Nord-Ost. When they showed the suicide bombers – they had such a detachedly cold look, but their hands with bombs and wires – they definitely did not lie!..

I used to talk with your father. He spoke very eloquently and thoroughly about different things, but when it came to you... you should see how his face was transformed, how much tenderness and happiness flashed in his eyes! What is your relationship?

Friendly: as a colleague with a colleague, an artist with an artist. Since my childhood, dad treated everybody, including me, very respectfully, giving complete freedom. In this regard, he is, of course, the smartest teacher. He is also a good adviser – he will always listen and guide. But for me, the daughter of Tahir Salakhov, he is not just a dad – he is first and foremost an artist with a capital letter, a creative person. And he also believes that I am first and foremost an artist, and then a daughter.

That is, in your relationship was not the problem of "fathers and children"?

Once there was a big fuss over Interview, where a photo of me naked appeared. Dad called and asked: what happened? Well, we met, I showed him the magazine. He looked and said: "A beautiful shot, and posing beautifully. Who is the photographer?" He, the artist, saw art in this picture, and not that his daughter was naked. This is a slightly different world. We used to see naked people at the institute, at home on the walls, father’s models, and so on. There were successful "form and content", nothing else in this context – naked, not naked – nobody was interested. 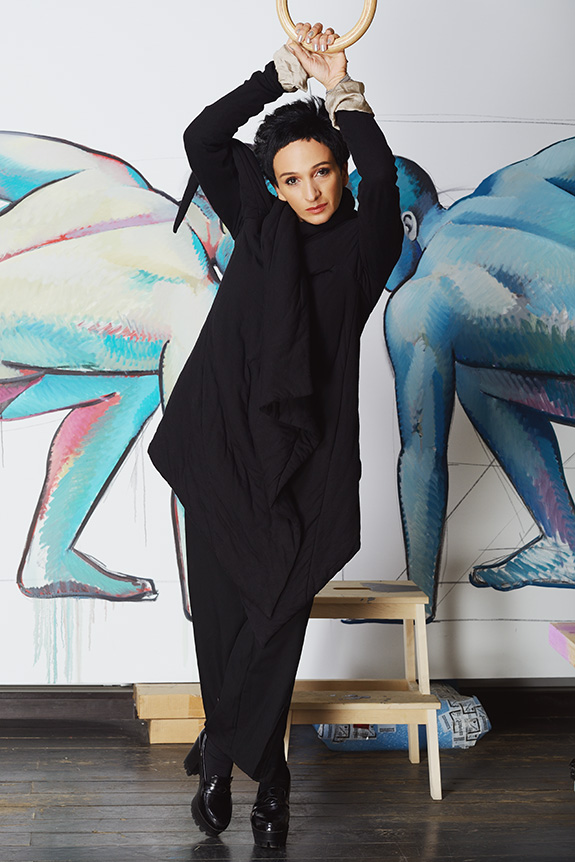 How did you manage, having lived in Moscow for so many years, to preserve the warmth of the soul without becoming embittered? I love Moscow very much, but here even the border guard at the airport wants to say: Smile, maybe you feel better!.. And you live in a difficult world, in the midst of the toughest competition, envy, intrigue...

I do not participate in anything like this. I go to college, teach – and leave. What happens there between teachers is not at all interested in me. And when I had a gallery, I also did not participate in squabbles. It all passes me.

Is a person accustomed to value his time making plans for the future?

Required. Next year I have an exhibition at the Saatchi Gallery, in October. A year later, there will be an exposition in Dubai – however, I have not even started to do work while I think... And in December I will go to the Islamic Art Festival, I will present my sculptures with my hands...

What do you say about the current Baku? Have you ever come to Baku to work?

Baku is the most beautiful city on earth! For me, this is the best vacation spot: generous sun, delicious food, walks through the old streets, summer cottage... I recharge there a lot, but I don’t have a desire to work. By the way, what is happening in Azerbaijan in the context of modern art makes me very happy. The good news is that, unlike Russia, money is invested in art, a lot of work is being done, funds are being allocated, so today Russian artists are less known in the world than Azerbaijan.

Is that why you prefer to work in Italy?

Yes, I bought an apartment there, I have my own workshop. There is nothing annoying and not distracting me. I just create and enjoy it. Delicious food and awesome people! Well, marble, without it is very boring... 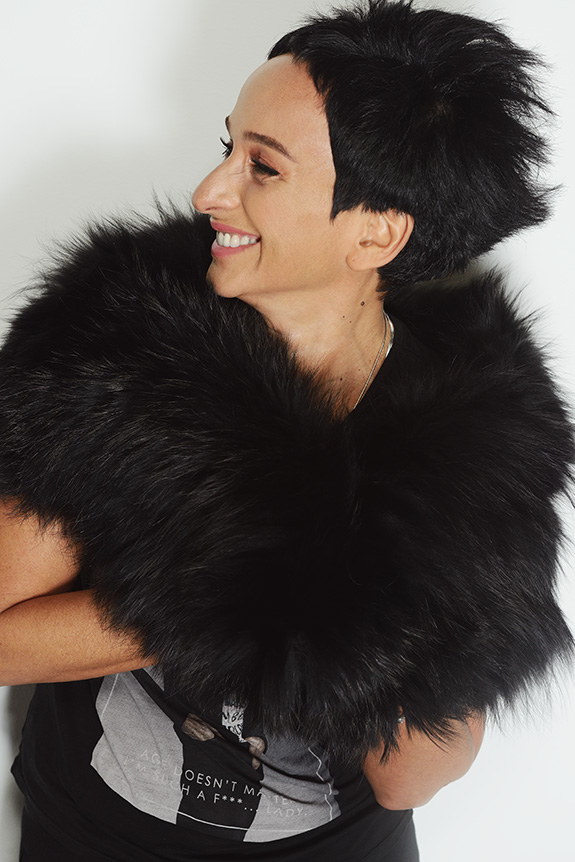 Material published in the 12th issue.