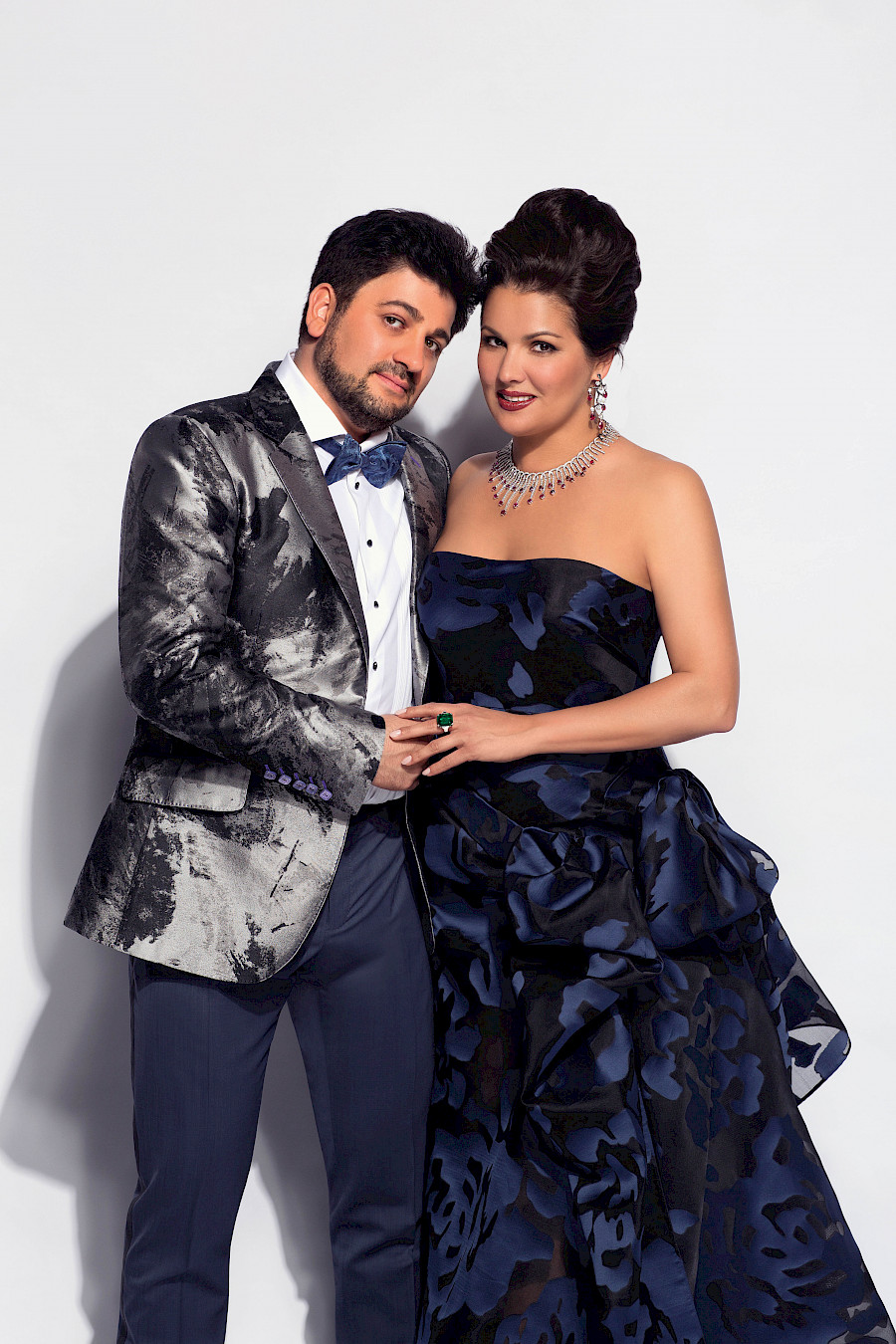 They met at the beginning of 2014 in the Roman Opera, and in the summer of the same year, their engagement took place in Salzburg. The stars of the world opera stage, Yusif Eyvazov and Anna Netrebko, consider their union to be strong and indestructible, and that now it’s easy to legitimize the relationship. Today, they are ready to share with the readers of NARGIS the secrets of their beloved profession and to lift the veil of personal relationships.

Yusif Eyvazov is a native of Baku. After school, without any particular desire, he went to the Polytechnic, deciding to follow in the footsteps of his father Vilayat Eyvazov, a metallurgist well-known in the republic. The years spent at the Polytechnic were not in vain – it was at this time that Yusif showed singing talent, after which the scale of life priorities became more distinct: from now on, music in Yusif’s life took first place. Then there were the conservatory, persistent vocal lessons, the dream of becoming a pop singer...

But – “here is a new turn”: one day, Yusif, having heard on TV Montserrat Caballe, lights up the dream of becoming an opera star. They say that to achieve the goal of one talent is not enough, but Yusif does not hold stubbornness or sense of purpose. Contrary to advice and persuasion, first abandoning the technical college, and then the conservatory, at the age of twenty he goes to Milan to independently conquer the operatic stage. In Italy, Yusif learns from the famous masters of bel canto – Olivero, Corelli, Domingo and Luciano Pavarotti himself, whom he considers one of the best tenors in the world. Together with the La Scala troupe and the Royal Opera of Monte-Carlo, Yusif Eyvazov performs on the best opera stages in the world. Once he had a chance to speak even before the Pope.

According to European critics, today the most significant role of Eyvazov is Othello, which he played on the stage of the Dante Alighieri Theater. However, the role of Cavalier De Grieu in Puccini’s opera “Manon Lescaut”, where he performed with Anna Netrebko, who performed the main women's part, was no less successful. The premiere took place in 2014 at the Rome Opera House (Opera Di Roma). And this meeting on the stage became a landmark for both... 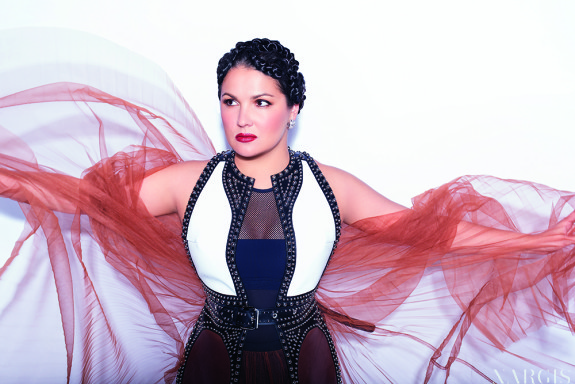 Anna Netrebko – People's Artist of Russia. She always knew that she would perform on stage, no matter in what capacity. She sang in the choir "Kuban Pioneer", she studied at the music school, then at the conservatory, at the same time participated in beauty contests, even became vice-Miss Krasnodar. God rewarded her with a bright stage appearance, voice and strong character, which helped her achieve the desired – to become a star.

The party of Violetta Valeri in Traviata blew up the prestigious 2005 Salzburg Festival. Pretentious Europe was shocked by the Russian singer Anna Netrebko, whose performance crossed out the idea of opera as a “static” musical genre. Since then, Anna Netrebko is allowed to improvise on stage, and the audience with a sinking heart is waiting for her to make some kind of challenge, creativity. Yes, she does not fit into the framework of the usual image of the prima donna, but she made everyone believe that Anna is the queen of the operatic stage.

Her performance is always extraordinary – she can throw off her shoes at the concert and spin in incendiary flamenco, laugh and give flowers to the audience (by the way, Christian Louboutin, in theory, should pay extra for advertising his products with red sole)...

Your relationship pulls into a classic office romance. Was it love at first sight?

YUSIF: I admit, at first I didn't have it. Judge for yourself: at the console – Riccardo Muti, partner – Anna Netrebko, the star, the most famous soprano in the world! All my thoughts were directed not to hit the face in the dirt. But, I confess, we finished the last performances with the feeling that something was happening...

ANNA: Indeed, we were absorbed in work – a very important premiere for all. It came about by itself: we suddenly began to understand that we wanted to see each other and spend time together more often, then we began to look closely...

Do you have a common repertoire other than Manon Lescaut?

ANNA: I want to say that Yusif is first of all the owner of a magnificent dramatic tenor, which any theatre wants to get. We have a lot of common repertoire, and now we have huge plans for the future.

YUSIF: We have solo concerts, and I must say that this, of course, is a great responsibility for me. After all, going out with Anna on the scene, each time you need to comply, and it is not easy! Therefore, I do a lot of work and work on myself. 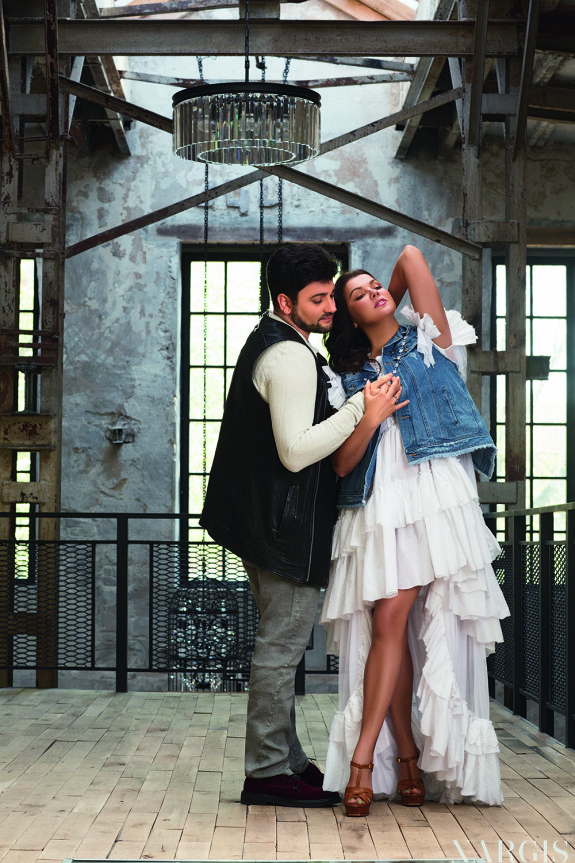 What do you never forgive a man?

YUSIF: Our union is very harmonious. Probably, because we are very similar in many respects, we look at some things the same way and both put pride of respect and love for each other.

ANNA: We do not swear, we resolve all disagreements calmly, discussing.

Yusif, you have been living in Italy for 17 years, working in the Italian Opera. Are you a citizen of this country? Anna, I know for sure – a citizen of Austria. Where are you planning to build a family nest?

YUSIF: I have an Azerbaijani passport, which I am not going to change. You can live in Europe without being a citizen of a European state. After meeting with Anya, we decided to settle in Vienna – for both of us this is the most convenient option. Although we both love Italy, and if we decided to live there, I think Anna would not mind: she, as a loving (and beloved) woman of the Caucasian man, would follow me wherever I go!! I must say that the meeting with Anya changed a lot of priorities in my life. For example, I never wanted children, but now I really want to. We already have one child – Tiago is my dear, and it was he who revealed to me how beautiful it is to be a father!

ANNA: We live between Austria and America. But as work brings us to different countries, naturally, we spend a lot of time away from home. Whenever possible we fly to our child or he flies to us on a vacation. Tiago Arua, or Hush, as we call him, is already in the seventh grade. He goes to school, and therefore sometimes, unfortunately, he has to part for a short time. Since Yusif came to us, our family has become full and happy.

Anna, have you ever been to Baku?

Yes, I was in Baku, one might say, with an unofficial visit – a year ago, immediately after meeting Yusif – he brought me to introduce his family. I was delighted with this magnificent city, wonderful people, extraordinary cuisine and a warm atmosphere reigning around me. Since then, I really want to go back there. Let's hope that this opportunity presents itself!

Yusif, on the stage, Anna is very energetic and impulsive, real fire! Is she the same in life?

She is like that in life: very emotional, energetic and rather impulsive. But at the same time – a very intelligent, sensible woman, and this property of her nature, I appreciate especially. 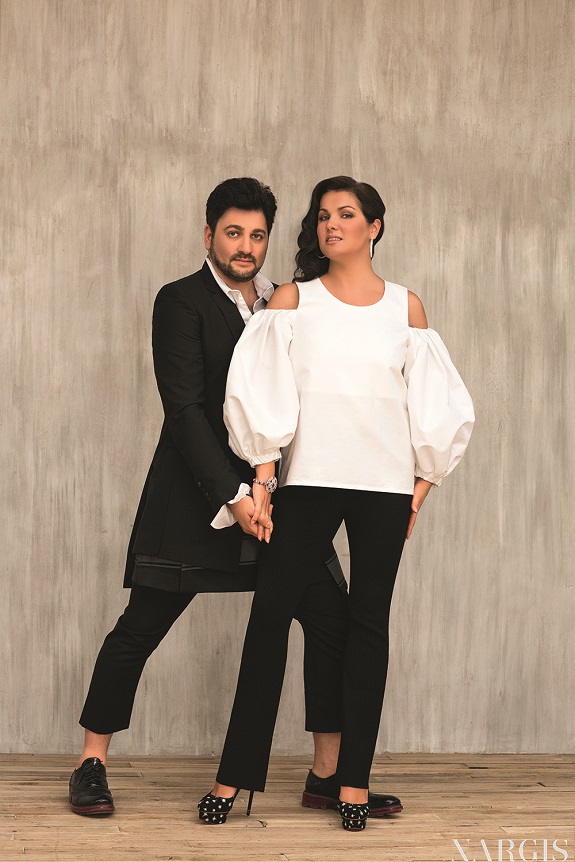 How did she take you in the first place?

With the things that are PRESENT! She is a very sensitive, kind and open person. I immediately felt it and realized that I had finally found my soulmate. I somehow decided everything for myself. Anna made me the happiest man in the world!

Anna, Azerbaijani men are famous for being able to take care. How did Yusif manage to surprise you?

With him, I felt like a real woman, beloved, about whom her man takes real care. Yusif wrote poems to me... Sometimes, when we are in different countries, he may come to me as a surprise – he says that he goes to bed, and at that time he gets on the plane. Of course, he is very romantic!

How not to ask people obsessed with the scene about their favourite roles ...

YUSIF: Othello! When I debuted in this play at the Alighieri Theater, in Ravenna, the play was directed by Christina Muti – the wife of a famous conductor. It was she who revealed in me some features of this hero: love, jealousy, passion – and all this is in absolute madness! I love this character for the fact that he is very sincere – my hero just cannot live otherwise.

ANNA: I love all my roles, especially those that I sing at the moment.

Who are your family friends from the stars?

YUSIF: We can say that we communicate very closely with many opera stars and just singers. Some of them I knew before, with others I was introduced by Anna. These are Maria Guleghina, Dima Hvorostovsky, Ildar Abdrazakov, Peter Bechara, Thomas Hampson and many, many others – do not list them all! We are close friends with Placido Domingo.

The profession, they say, leaves its mark, and the theatre suffers from excess, “zamylennym” romanticism. Do artists sin in theatricality in everyday life? And is it really necessary romance in everyday life?

YUSIF: Profession, of course, leaves an imprint. In general, artists – not just opera – have their own, special look at everything. They react differently than others, and this is the difference.

ANNA: A theatre is a theatre, and a personal relationship is a completely different, real life. And it is beautiful, better than any pseudo-romantics!

Technology is advancing on all fronts, including the stage. Are there any boundaries of creativity in opera art?

YUSIF: Yes, new technologies are gradually being introduced into the opera house. Recently, they began to use the latest equipment for scenery, lighting, the projection of images, special effects... But here it is very important that the director does not overdo it.

ANNA: The boundaries of creativity can take place in human imagination and physical capabilities.

I believe that, despite fears and prejudices, one should not be afraid to try to do what even at first glance seems impossible to you: maybe you will do it, even if not quite as you imagined, but you will! And this is the most important thing. 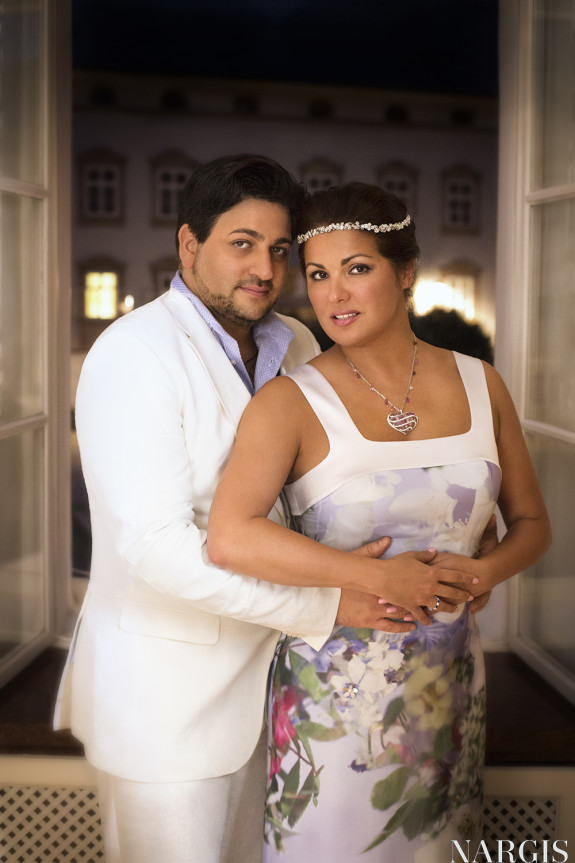 Do personal relationships give the play on stage some extra overtones? Or do not affect the already established image?

YUSIF: I am sure that personal, intimate relationships on the stage add sensitivity and sincerity to the image, destroying the boundaries between the stage and the auditorium. I am sure that the spectator feels this perfectly and leaves the theatre with the feeling that he didn’t just listen and watch, but survived all the acuteness of feelings that the actors experienced on the stage, missed through themselves - for us it is extremely important! Credibility on stage is a priority!

Anna, in an interview with Komsomolskaya Pravda, Yusif called you "the main melody of his life." Are you able to metaphorically characterize your attitude towards him?

*Material published on the 18th issue